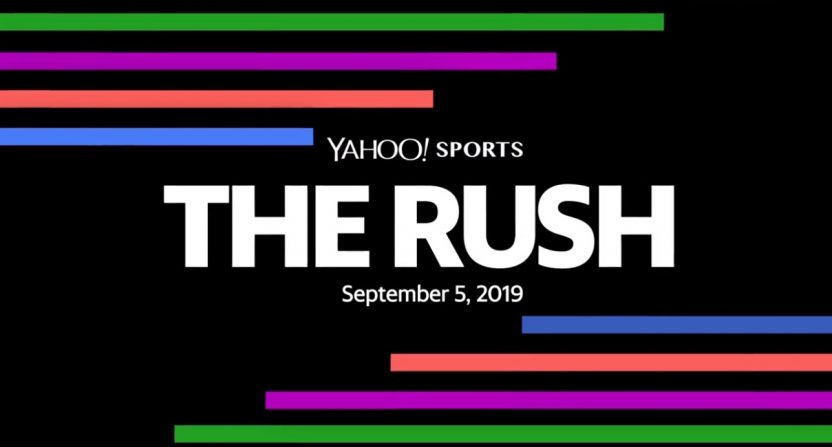 As you may have heard, the NFL season begins Thursday night, and Yahoo Sports has a three-pronged strategy in order to grow their product within that space, as its general manager Geoff Reiss laid out at the company’s Manhattan offices not far from the in-house espresso bar.

Yahoo is in the second year of an agreement with the league that allows it to carry live games online and on its Yahoo Sports and Yahoo Fantasy Sports apps. That includes primetime games and the local games in individual markets. Reiss said the company’s first goal is to further grow the audience in that space, especially in the 39 and under demographic. Nearly 60 percent of viewers on Yahoo’s live platform were under 40, the company said.

“A lot of folks have written about the NFL having this demo problem, that they’re having a hard time chasing down younger viewers,” Reiss told Awful Announcing. “I would argue that our experience informed us that the NFL doesn’t have a demo problem as much as they have a use case problem.”

That use case problem: Younger fans are less inclined to sit in front of a physical television and watch a game for three hours. But Reiss noticed that they’ll turn a game on several times a week in 10-15 minute bursts. The average unique visitor on mobile watched for 41 minutes at a time on the Yahoo Sports app, the company said. Yahoo also said that 75 percent of mobile app users returned week over week to watch live games and there was a 90 percent ad completion rate.

There could be a few reasons why the younger audience doesn’t want to be tethered to a TV these days, including shorter attention spans, more media options and the Red Zone-ification of the NFL conditioning users to only tune in when there’s a scoring opportunity.

“This is a broader existential issue around all of sports,” Reiss said about the pros and cons of being on fans’ phones. “There’s this incredible utility that allows you to hit a singular button and you’re watching NFL, which is awesome. But I can also watch Netflix that way, or Amazon or YouTube.”

Reiss said he was pleased with how the live programming performed last year and is hoping for growth in that category aided by Yahoo’s second strategy, which is its original NFL shoulder programming and content. And in that space, Yahoo is tired of trying to be like everyone else.

“I think of what you’ll see from Yahoo Sports over the course of the next year is a very deliberate pivot away from trying to be in the Greek chorus of just the gaggle around these particular sports,” Reiss said, “being one of the 15 entities chasing down ‘here’s what the MRI said, here’s what the coach said at the postgame presser.’ It’s really hard to add value to that. It puts us in a position where we’re competing with folks like ESPN on their terms and not ours.”

Yahoo’s original content focus in football will focus on its weekly Fantasy Football Live  with Brad Evans, Andy Behrens, and Liz Loza, the 90-180 second weekday video show The Rush with Jared Quay and a third yet-to-be-released football voices show centered around an all-female cast, which should be announced within the next few weeks. Those shows will be paired with Yahoo’s traditional NFL reporting led by Charles Robinson, Kimberly A. Martin, and Terez Paylor. The goal, Reiss said, is to talk about football in different ways than shows like Countdown or GameDay or any of the other pregame or analysis shows.

“We are constantly looking for the non-Adam Schefter ways into the sport,” Reiss said. “Not to disparage Adam Schefter, he does an amazing job. We’re going to have a hard time adding value to that conversation. I think there are lot of things we can do in shoulder programming and in our overall approach to the content that is markedly different than what is available elsewhere, and that’s where I want to focus our energy.”

Yahoo’s third and strongest strategy is in its fantasy gaming, which enters its 20th season on the market. Yahoo says it has over seven million dedicated players this season and its expecting 5-6 percent growth in the space this season.

“We’re continually reinvesting in aspects of the game to make it more accessible, more fun and is the absolute focal point for what we’re doing in our games group,” Reiss said.

The main way they’re doing this for the season is improving the chat function on its league page, which Reiss said was good 1999 or 2003 chatroom technology but leaves a lot to be desired for 2019.

“It just didn’t have the features that we wanted to have and I think it’s an important part of the league,” he said. “There is room for new iterations.”

Where Yahoo really aims to grow in fantasy is in its premium gaming, like Daily Fantasy Sports and what it’s calling Best Ball.

“We think there’s a real opportunity on the paid gaming side,” Reiss said. “The weird thing about fantasy sports is that for many fans, the most enjoyable part of the product is something you do up front, which is drafting. And then you don’t get to do that for a long time.”

Even if only a fraction of its regular users play DFS or Best Ball, that’s a nice added revenue stream to build upon if Yahoo eventually decides to enter the sports betting space.

“These are highly qualified users, many of whom are already participating in various forms of paid gaming,” Reiss said. “It’s something we’re looking at very seriously.”

If Yahoo is able to hit on all three of its revenue strategies for 2019, in addition to a stronger emphasis on its social platform, the NFL won’t be the only entity benefiting from its impending 100th season.