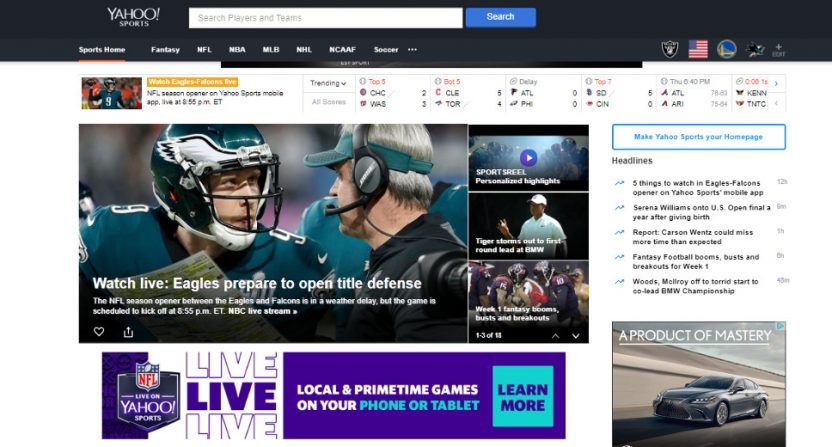 The 2018 NFL season gets underway Thursday night, and a big change this year will see Yahoo Sports live-streaming games from every window without the need for authentication. That’s part of Yahoo parent corporation Verizon’s new December 2017 streaming deal with the NFL, which will see games streamed across platforms from Yahoo to AOL to Tumblr. And in Yahoo’s case, they’re also complementing that programming with some new shows, some specifically focused on football, and they’ve updated their app to combine live games, original content and fantasy content/fantasy games (like the newly-announced Yahoo Fantasy Slate) all in the same place. Yahoo Sports general manager Geoff Reiss and head of content Sarah Crennan spoke to Awful Announcing about this earlier this week, and Reiss said the full NFL deal is a huge step for them.

“Yahoo Sports will be the home of what we’re terming ‘frictionless football,’ a place where fans can watch NFL games that are available in their local markets for free without any need for an authenticated subscription in all the windows that the NFL has to offer fans,” Reiss said. “Thursday night, Sunday 1 (p.m. ET), Sunday 4 (p.m. ET), Sunday night, Monday prime are all available to Yahoo Sports. And that will be surrounded by a series of original projects, some of which have already launched, some of which are going to be launching over the next few weeks.”

Crennan offered more details on those original projects and how they’ll play into Yahoo’s overall plan.

“On June 4, we launched The Rush with our host Jared Quay; that’s our daily two-minute show made for first thing in the morning,” she said. “Our goal really is to give sports fans as much information about core sports updates as well as the fun aspect of sports and stick to that based on how people consume on mobile. The second show, which we announced last week, is called Mostly Football, and we partnered with Martellus Bennett for that show. It’s Thursdays in the pre-game window, so it will be live at 4 p.m. Pacific/7 p.m. Eastern, but we will use a lot of that content, we’ll clip it and program the VOD (video on demand) across our network and social channels.”

“And then the third show that we’re excited about is called The Spin. For a long time, Yahoo Sports has employed a very strong roster of journalists who have a very clear perspective, a very deep perspective, a whole lot of knowledge. What we are hoping to do with The Spin is offer a video complement to our editorial features, and a way to get our journalists on camera. That is The Spin, we’ll make announcements about the hosts in the next three weeks, and we’ve made some great hires, particularly around our NFL roster with Kimberley Martin joining us Sept. 10 officially, and Terez Paylor came over in April.”

Crennan said Yahoo’s video content is made with their wide distribution options in mind.

“There are several different opportunities across the distribution that we manage, and then separately, on social media, the channels that Yahoo Sports operates. So if you take Mostly Football for example, you will be able to see that in two places in our app, in the watch tab and the favorites tab, you’ll be able to see that live on our website, the VOD clips will be seen throughout Yahoo Sports depending on the topic, and then we’ll also host the live show on Facebook.”

And Reiss said having top-tier rights like NFL games will play a big role in promoting that other content.

“The biggest opportunity is the ability to attract large numbers of fans into our app as we look to showcase all the original stuff that Sarah’s team has been developing. Being the home for mobile football is the way to drive a lot of trial for fans and have them take a look at the stuff that we’ve been up to.”

Crennan said they’ll also be able to stand out from conventional broadcasts by combining games with fantasy and original content.

“The aspiration is the most immersive mobile experience for football fans, and the combination of the NFL games, the original shows, the introduction of our Yahoo Fantasy Slate of games, for the first time, we’re adding the play tab to our core Yahoo Sports app, we think the combination of our offerings is a differentiation.”

Reiss said Yahoo is able to make their content stand out because they have more flexibility than TV- or print-focused outlets.

“What we think is our biggest advantage is that we are a digital- and mobile-first company. We don’t wake up in the morning thinking about how to repurpose a show and cut it into something else. The show The Rush is a perfect example; to make a big investment in a daily show that’s designed to run between a minute 45 and 2:30 each day is indicative of how we think about serving the audience within a mobile context first and foremost. When you talk about two years out, it’s about, whether it be in video, whether it be in terms of how we continue to gamify our platform, whether it be in terms of finding kind of differentiated ways for people to look at live events like the NFL, we really wanted to build a sports experience that reflects the way our fans live and not the way that digital networks are programmed.”

He added that the app changes will go beyond football.

“The gamification stuff we’re talking about is multi-sport, it’s designed to capture what the prevailing arguments are in sports at any moment and provide a way for fans to kind of weigh in on those things and keep score as they go.”

And while the NFL rights are the biggest ones Yahoo has right now, they do hold live rights in other sports, and may look to add even more in the future.

“It’s something we’re always looking at. We made an announcement late last year with the NBA that as part of our deal with League Pass we would be able to serve fans some live NBA games this coming season,” Reiss said. “And we’re always in the market for other rights that make sense, and I think that’s the operative term.”

He said those rights are crucial to Yahoo’s ongoing strategy.

“It would be hard to overstate how important the NFL games are, and having 17 weeks of regular season plus the preseason plus four weeks of postseason gives us a significant footprint in terms of the most valuable and most prestigious set of sports rights in the United States. Complementing those with the NBA package and with some other things that we have in development gets us a long way towards reaching critical mass on that front.”

And Reiss said that fits in with the content approach they’re taking, and with hires who can not only break news on Twitter or on Yahoo’s site, but can also appear on camera on various shows.

“Sarah’s team is doing an amazing job right now bringing in fantastic storytellers who I think are generally rooted in a deep journalistic background, but who have the ability to kind of pivot towards really kind of talking to fans, sharing their passions, and applying their storytelling to a bunch of platforms. We are in the midst of significantly bolstering our NBA team, [Jeff] Passan did a nice job the other night breaking the Josh Donaldson trade, we think Pete Thamel’s the leader in college football and he dabbled in some college basketball earlier this year, as you saw around the college basketball recruiting scandal. We are continuing to invest in all of our key sports, baseball, college football, NBA, NFL, in terms of finding top-flight talent.”

Crennan said while video isn’t the only criteria that goes into their hiring, giving their talent the chance to do on-camera work (and finding talent that can do that) is important.

“What we’re looking for is talent that has a range of storytelling interests. Given our focus of being able to offer them the toolset, it will vary depending on talent, but video is certainly something we want to have as an opportunity.”