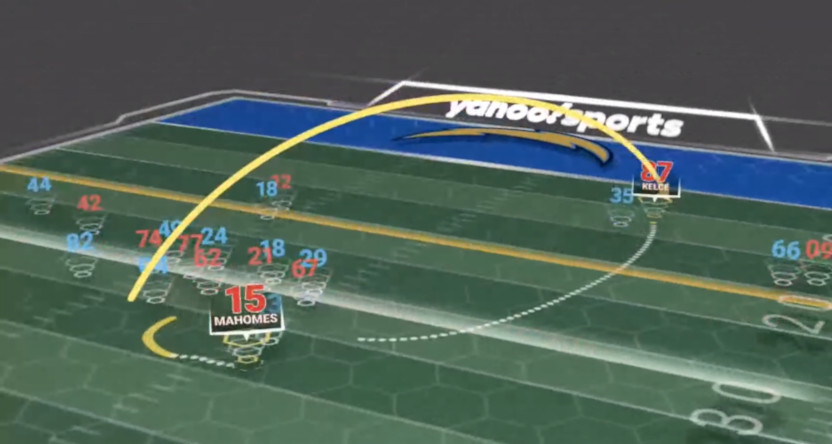 This fall’s NFL season will mark the third year where Yahoo will stream games to phones and tablets through Verizon Media apps, including Yahoo Sports, Yahoo Fantasy, AOL, and (new for this year) the Yahoo Mail app. This is part of a 2017 NFL deal with Verizon (which acquired Yahoo earlier that year), and this year will come with some new features. Yahoo Sports general manager Geoff Reiss spoke to AA this week about two new initiatives they officially unveiled Wednesday; a “Watch Together” remote co-viewing experience and a “Yahoo Sports PlayAR” augmented reality addition to their game center that will combine graphical replays and NFL Next Gen stats data soon after each play. Reiss said the success Yahoo’s seen for their NFL streaming so far motivated them to invest further in developing new features this year.

“We’re now entering our third season of NFL live games, we saw 75 percent year over year growth last year, we’re clearly establishing ourselves as this amazingly easy and frictionless place to watch football. We thought the timing was ideal to come out and take a pretty big leap forward with the next generation of experience around that.”

Verizon’s release mentions that Watch Together will give fans the ability to “co-watch, interact and immerse themselves in entertainment events ranging from sports to music.” The NFL is the first launch partner for this, but they’re hoping to bring it to other areas as well. It will let fans set up their own group video call “rooms,” combine those video feeds with  a live game feed, and even provide “intelligent audio” that can lower the volume of the game when people are talking and raise it when the call goes quiet. Reiss said this idea could have worked well even in a world without COVID-19 restrictions, but in a world where many kinds of normal gatherings are harder to have now, this has further appeal still.

“Regardless or not of if this was the COVID times, this would have been a really cool product. But just in my life, I’ve found a number of new social dynamics to fulfill those longstanding social urges, whether it’s distanced cocktail parties on peoples’ patios or decks or distanced hiking or camping or stuff like that. I think being able to bring a new way to consume a staple and favorite is a fundamentally smart strategic move for us, and again, not just because it fits the times.”

“At Yahoo Sports, there’s this unbelievable drive we have to bring these next-generation experiences. And none of us have ever chosen to watch a game alone; if we can watch with others, that’s our preferred way of doing that, in any context, at the stadium or at a bar or at somebody’s house. And I’m not going to predict what the 2020 season is going to look like in terms of live attendance or anything, but right now, there’s going to be a big appetite for being able to do this. …You have the opportunity to share these games, to tap into all the games we’re running on Yahoo Sports, which will be all the games that are available in your local market on both a local and a national basis.”

As for PlayAR (seen at top in a screenshot from a demo), Reiss said the idea of combining these stats and replays in this way is to try and offer fans a bit of a deeper look into what just happened on the field.

“It’s really allowing fans to understand just how plays come together. Let’s use some interesting emerging technology capabilities to get into deconstructing plays just after they happen, and do so in a way that has not been done before.”

Reiss said the last few decades of sports have demonstrated that there’s strong interest out there in figuring out the details, and he thinks PlayAR will fit into that.

“I think this goes back all the way to Bill James; any time we’ve been able to kind of open up the hood as a industry and give fans a greater insight into how sports work, they grab onto it to a greater and greater degree. You guys [at AA] do that every day; 20 years ago, it would have been unimaginable that there was consumer appetite for the machinations of how ESPN was putting together a Monday night booth, but it matters to us. We want to understand.”

“There’s an appetite for knowledge across sports, whether it be to understand how salary caps work or what goes into draft picks. So giving fans the power to reconstruct plays, and being able to do that across a NFL Sunday, is kind of cool. And the cadence of a NFL game allows time for fans to dip into that as they’re hunkering down with football for a few hours.”

Here’s a demo GIF showing off some of what PlayAR can do:

Overall, Reiss said the NFL is crucial for Yahoo Sports, and investing in developing new features like this makes sense for them as a way to further engage NFL fans. And he said they’ve also made further improvements to existing products, including providing a more detailed level of fantasy scoring and integrating fantasy push notifications with game streaming.

“The idea here is pretty simple; it’s to essentially double down on our commitment to by far the most important sport we cover in our portfolio. The team has been working across the board to enhance existing products that have long and loyal followings. So, you know, if you’re one of those fans that’s been forever driven mad because you can’t get fractional scoring for your placekicker in fantasy football, we fixed that this year, and we’ve done a lot of other important enhancements there, because it really is the tip of the spear for us in terms of how we engage our most committed NFL fans.”

“So we continue to build on the suite of push notifications we did last year with NFL Live. For example, if a guy on your team is in the red zone and we have that game available in your market, you’re getting a push notification to just jump right into live football and see if your running back or quarterback or receiver can rack up some points. And we’ve enhanced chat functionality, we’ve fixed little tiny details like fractional scoring for kickers; they sound small, but if you’re one of the literally thousands of people who want that detail and level of reality in the game, it’s a big deal.”

“And then at the same time, we’re bringing genuinely exciting new products to market, like WatchTogether and Play AR, that we think will continue to put some distance between us and other places where people can goof off and watch some football.”

Yahoo’s NFL streaming, including the new WatchTogether feature, will debut Thursday night with the 2020 NFL Kickoff game between the Kansas City Chiefs and the Houston Texans (8:20 p.m. Eastern). The PlayAR feature will debut with Sunday’s games.