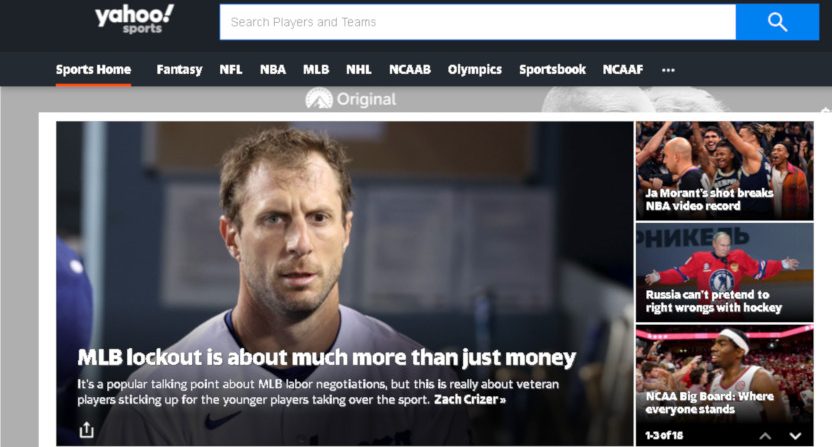 Last May, private equity company Apollo Global bought Yahoo and AOL from Verizon. It now looks like they may be moving the Yahoo Sports part of the company. On Wednesday, CNBC’s Alex Sherman reported that Apollo is in talks with sports betting companies about merging Yahoo Sports with one of those companies, which then might set up a potential spinoff. While those are only preliminary talks so far, that could wind up being quite a significant move for the sports media space. Here’s more from Sherman’s piece:

Apollo Global Management, the private equity firm that acquired Yahoo from Verizon for $5 billion last year, is having preliminary discussions with sports-betting companies to merge their assets with Yahoo Sports, according to people familiar with the matter.

One of the companies Yahoo has spoken with is Australia-based PointsBet Holdings, which has a market valuation of about $760 million, said the people, who asked not to be named because the discussions are private.

All talks at this stage are early, and no deal is imminent, said the people. Yahoo hasn’t settled on a target and may not pursue a deal, the people said. Spokespeople for Yahoo, Apollo and PointsBet declined to comment.

Apollo and Yahoo are considering merging Yahoo Sports with an existing sports-betting company, a move that could set up an eventual spinoff of Yahoo Sports, two of the people said. If a deal is struck, the new company would likely keep the Yahoo branding, the people said.

This may make some sense. Yahoo Sports has a strong existing userbase, especially on the fantasy side. They still produce plenty of sports content (fantasy and beyond), both their own and through syndication deals. And they also have their own nascent Yahoo Sportsbook, which is through a deal with BetMGM. All of that could be attractive for a sports betting company, and maybe especially a smaller one looking to boost its U.S. brand (although it’s unclear how particular deals like the Yahoo Sportsbook one with BetMGM might be affected if Yahoo wound up with someone else). As one executive said to Sherman, the market’s currently filled with a lot of entrants looking for ways to stand out: “Everyone is talking to everyone right now. There needs to be consolidation.”

And the decision to only look at a merger for Yahoo Sports rather than the larger Yahoo/AOL company Apollo Global bought (for $5 billion) means that smaller players like PointsBet could be involved, and could get involved with only the part of Yahoo they care about. So that could be an auction with more bidders than what we saw for the whole Yahoo/AOL combination. Meanwhile, a merger like this could give Yahoo Sports some money, could possibly boost its immediate sportsbook efforts (particularly if this is with a company that has rights in states where Yahoo Sportsbook doesn’t yet), and could set it up for that kind of potential sports-only spinoff outside the wider Yahoo/AOL ecosystem.

However, there would seem to be some risk here as well, especially if this does wind up coming to a full spinoff. A big part of Yahoo Sports’ success has always been the “firehose” of traffic from the Yahoo.com front page for particular sports stories that get featured there. There are other parts of Yahoo that have advantages for Yahoo Sports, too, including Yahoo Mail (which they’ve even used for streaming NFL games). It’s possible that some of those connections to the wider company could be retained even under a spinoff, maybe especially if the spinoff retains that Yahoo branding, but pulling Yahoo Sports out of the Yahoo ecosystem comes with some cons.

Of course, the U.S. sports betting landscape is very much in flux. The aforementioned large amount of operators, the differing state-by-state regulations (and many states still not offering online or mobile betting), and the current massive advertising and promotional spends from operators looking to get signups mean there’s a lot of turmoil there. So any deal with a betting company carries a bunch of projections about where that company will wind up, and those are hard to make right now. We’ll see if these talks wind up coming to anything, but it’s certainly notable that Apollo is holding them.