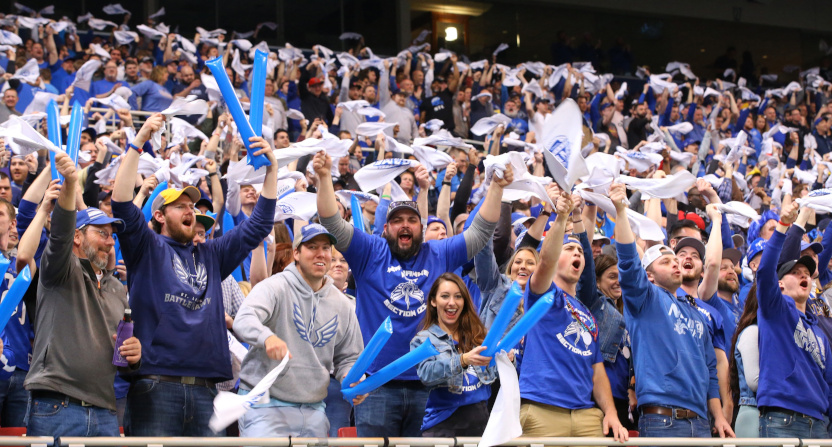 Of course, there are some caveats there. As Karp noted, this was the first weekend with two games on cable. But even with that factored in, this still isn’t great news for the league. Here’s a look at how the viewership has stacked up for each window and each network so far (numbers for Weeks 1, 2, and 3 via Paulsen at Sports Media Watch). Click to embiggen if needed.

So this isn’t just about a second game on cable, although the shift from ABC to ESPN for New York-St. Louis (St. Louis fans at that game are pictured at top) did see the week’s biggest viewership drop. The broadcast to broadcast windows also fell, and the FS1 to FS1 window dropped 26 percent. There are certainly some concerns for the league with these drops continuing.

The XFL also appears to be losing some ground relative to other sports. As per Mitch Metcalf of Showbuzz Daily, Week 1 saw the best-drawing XFL game beat all sports that week in viewership except for Sunday golf coverage, and three of the four XFL games beat everything in the 18-49 demo. In Week 2, the best-drawing XFL game was behind NASCAR Daytona 500 coverage, the NBA All-Star Game, the NBA All-Star Saturday Night event, Sunday golf coverage, and WWE Smackdown in viewership, and behind NASCAR, three NBA events, and Smackdown in the demo. In Week 3, the best-drawing XFL game was behind two different NASCAR races, a regular-season NBA game, Sunday golf, and Smackdown in viewership, and it barely beat the Kansas-Baylor college basketball game (and the two XFL games on cable trailed Kansas-Baylor). That best XFL game trailed all of those properties that beat it in viewership (except for golf) in the demo as well.

That’s about the same number of events ahead of the top XFL game as in Week 2, but it’s notable that the other events are less special and drew less viewership than some of last week’s competition. This week included a regular-season NBA game and one non-Daytona NASCAR race, while last week had the NBA All-Star Game and the first day of Daytona 500 coverage). If you look at the worst-performing XFL game instead of the best, there’s a whole lot ahead of it: other things beating it in viewership included another NBA game, Saturday golf coverage, five further college basketball games, and a bowling event.

The viewership numbers here for the XFL still aren’t terrible in a vacuum, especially given that the networks reportedly aren’t paying a rights fee for XFL games. The numbers for broadcast games Saturday are in the middle of what those networks drew for other programming Saturday, and the numbers for ESPN and FS1 are similar to lots of other programming on those channels. So this isn’t at “get it off the air” territory yet, and there are lower numbers from several more established leagues; for example, the NHL on NBC drew only 1.192 million viewers Sunday, the English Premier League on NBC drew 843,000 Saturday, and plenty of college basketball programming on CBS and Fox this weekend trailed the XFL. (Big East games on Fox Saturday drew 546,000 and 408,000 viewers, so the floor for what sports can air on network TV is pretty low.)

But the XFL is moving from an attractive television property to more of a mediocre one at this point, and the continued double-digit week-over-week declines are particularly concerning. If the numbers stabilize around this level, that wouldn’t be too bad. If the numbers continue to fall this much week after week, though, that will raise big questions about the league’s future.