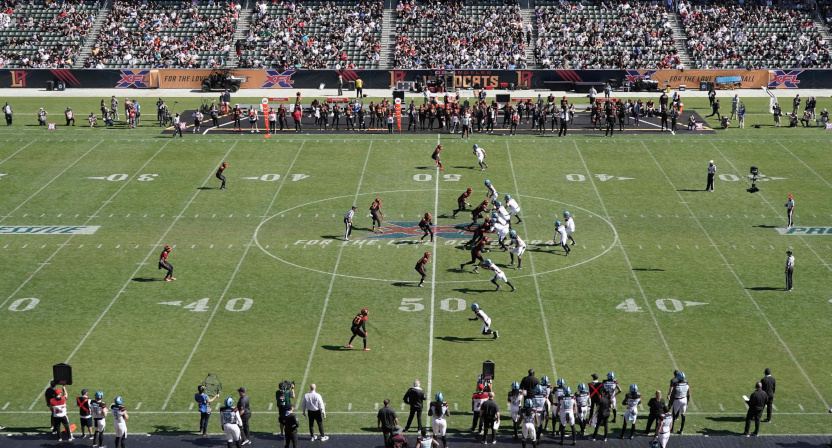 Through two weeks of play, the new XFL has posted some notable TV ratings. In Week 1, they averaged 3.318 million viewers across four games, and while the numbers fell in Week 2, they’re still pretty respectable. Here’s what the Week 2 numbers looked like, via Paulsen from Sports Media Watch:

The biggest drop there is the FS1 game Sunday night, but it’s notable that last week’s Sunday night game was on ESPN. While they’re both cable networks, ESPN has more subscribers and is a more common channel for people to go to, so events there are usually rated a bit better, and it seems likely that the percentage drop would have been more in line with the drops for the ABC and Fox windows if not for the ESPN to FS1 shift.

Overall, while those are significant drops (to an average of 2.06 million viewers for the four games), it’s not unexpected for interest in a new league to fall back a bit after its opening weekend. It’s also notable that there was more prominent sports competition this week. As per Showbuzz Daily’s Mitch Metcalf, last week’s only event to edge the top XFL game in viewership was Sunday AT&T Pebble Beach Pro Am golf coverage on CBS, while this weekend saw the top XFL game (Dallas Renegades-Los Angeles Wildcats Sunday, seen above) beaten in viewership by NASCAR Daytona 500 coverage on Fox Sunday, the NBA All-Star Game on TNT Sunday night, the NBA All-Star Saturday Night event on TNT, CBS’ Sunday coverage of the PGA Tour’s Genesis Open, and WWE Smackdown on Fox Friday.

Both the Daytona 500 and the NBA All-Star Game are pretty major events that draw higher viewership than other coverage from those leagues, so it’s not surprising they beat the XFL significantly. And the XFL’s best game beat all NCAA basketball coverage, all NBA coverage that wasn’t the All-Star Game or All-Star Saturday Night, all non-Sunday golf coverage and much more, and even their lowest game beat all hockey coverage, all soccer coverage, and all NCAA basketball coverage that wasn’t the Indiana-Michigan game Sunday on CBS. They also continued to do well in the 18-49 demographics, with three of their games averaging between 800,000 and 900,000 viewers there and the fourth (the FS1 game) pulling in 661,000; those numbers are ahead of all golf, NCAA basketball, hockey, and soccer coverage, and up there with two of the smaller NBA All-Star events (the celebrity game and the Rising Stars Challenge, both Friday night).

Of course, the XFL’s second week handily beat the AAF’s second week last year, but the network situation is a big part of that. The AAF’s second week had a game streaming-only on B/R Live, two on NFL Network (drawing 424,000 and 425,000) and one on TNT (drawing 1,018,000). Meanwhile the XFL had three games on broadcast TV and one on FS1 (which is way ahead of NFL Network in carriage, and not too far behind TNT), so they’re unquestionably in a better position on the TV front. And they also get the benefits of ESPN (especially) and Fox (somewhat) promoting them on their other sports programming.

More than the direct XFL to AAF audience comparisons, though, the more notable element there may be the percentage drop. The AAF’s first week saw two games on CBS (at the same time, split up by region) that drew 3.25 million viewers, plus 640,000 for a game on NFL Network (they also had a Week 1 game on CBS Sports Network, which is unrated). That’s a 69 percent drop from the CBS game to the TNT game (of course, CBS is broadcast rather than cable, and the TNT game was Saturday afternoon rather than Saturday primetime, so that mitigates it a bit), and a 34 percent drop from the first NFL Network game to the second two. So the AAF’s Week 1 to Week 2 drop looks a little steeper than the XFL’s.

The key question is if the XFL will be able to hold on (or mostly hold on) to this Week 2 audience, or if the ratings will keep falling. With the AAF, things actually stabilized pretty decently following the Week 1 to Week 2 drop; the NFLN audience actually went up in Week 3 (to 491,000 and 515,000) despite a lot of negative off-field stories questioning the league’s finances (which, yep, turned out to be justified). With the XFL, the league seems to be on much stronger financial and operational footing, so there isn’t an obvious reason for a further drop. However, if the amount of people who regularly want to watch alternative spring football of any variety is closer to what the AAF got than what the XFL has got so far, there could be some further drops ahead. And those could be problematic for the XFL, and especially for their broadcast partners, and that might be a case where a higher-distribution broadcast deal has some drawbacks; 515,000 viewers is a great audience for a non-NFL game on NFL Network, but anything near that would be awful for a broadcast network.

So far, the XFL ratings seem fine for the league and its broadcast partners, even following that Week 1 to Week 2 drop. But it remains to be seen where the numbers will settle. If Week 3 sees similar numbers to Week 2, or even a small decline, that seems pretty solid for the league and its broadcasters. But if it sees another big drop, then there will be more questions asked about the XFL and how long it will last.