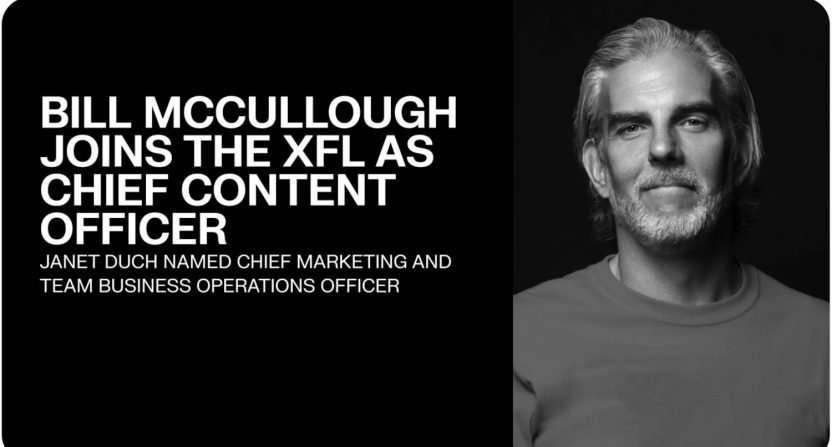 The XFL has been making some notable hires ahead of its February 2023 return (to be broadcast on Disney/ESPN platforms), with those hires coming both on and off the field. The latest notable off-the-field hire is their new chief content officer, Bill McCullough. As per a release, he’ll “oversee all content strategy, development and production across League, team and partner channels and will lead internal and external teams to create compelling content and build franchises that will engage fans, grow the XFL audience and maximize ROI.”

Also as per that release, the league announced that current chief marketing and content officer Janet Duch has been elevated to chief marketing and team business operations officer. There, she’ll add oversight of the XFL’s team business operations, “including ticketing strategy, business intelligence, consumer products, and gameday operations and presentation.” So Duch will still be involved on the marketing and content side, but McCullough will oversee much of it, with Duch now gaining more responsibility elsewhere. Here’s more from that release on McCullough’s background, which includes time with esports group Faze Clan, the NFL, and HBO:

McCullough brings over 25 years of experience in content development and strategy to the League. Before joining the XFL, McCullough served as Executive Vice President for one of the world’s most prominent and influential gaming organizations, Faze Clan, where he led the company’s vision around building intellectual properties and original content franchises. Previously, he worked with the NFL as Vice President, Content Development, and Vice President/Creative Director of Marketing, where he led marketing campaigns that helped drive record ratings for the NFL Combine, NFL Draft, and NFL Postseason.

McCullough has also worked across the content departments at GoFundMe, GoPro, HBO, HBO Sports, and was the Creative Director and Owner of Wonderland Productions. McCullough was featured in Adweek’s Top 100 Creatives feature in 2020 and was also recognized for his involvement in producing NFL Films’ A Lifetime of Sundays, NFL Super Stadiums, Facebook Watch’s Hala Madrid, and directing HBO’s Real Sports. McCullough has won Emmys as a Producer, Director, Creative Director, Editor and Composer. He holds a B.A. in Communications and Media Studies from Susquehanna University.

An interesting element of McCullough’s background is how he’s worked both on specific advertising/marketing campaigns (for paid spots to be placed elsewhere) and on content campaigns. The latter includes NFL Network/NFL Films content like A Lifetime of Sundays and NFL Super Stadiums. That’s also certainly also intended to boost the league’s profile, but is longer-form in-house content, and it’s content people are (at least theoretically) seeking out on league platforms rather than content the originator pays to place elsewhere.

Thus, it will be worth watching how much each of those areas McCullough winds up working in with the XFL. There’s certainly value for the league with both options. That could possibly include ads on other Disney/ESPN properties (or maybe even other networks, or print/radio/web properties elsewhere) to get people to tune into games. It could also include longer-form in-house content that can go on XFL social channels or ESPN channels or wherever, similar to some of what the NBA and the G League have been doing recently.

Of course, McCullough just took this job, so it’s far too soon to predict exactly what he’ll do. And the league’s kickoff is in less than two months, so this can’t be a ground-up build for him; he’ll certainly be working with much of what Duch and others have already come up with. But it is interesting to see someone with this background tabbed for this prominent XFL job, and that perhaps raises some of the expectations for what in-house content (whether external ads or own-platform campaigns) the league will create.