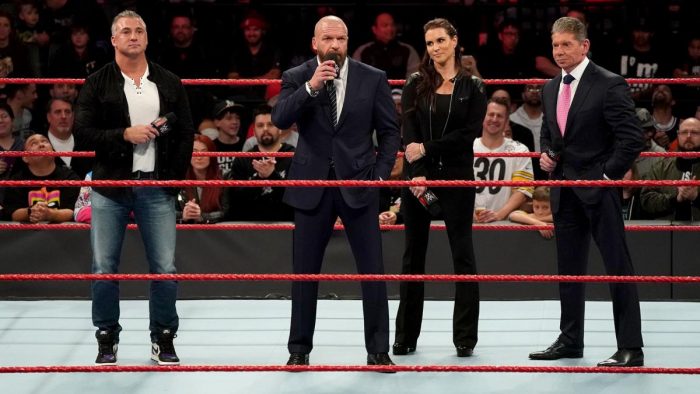 In a letter sent to WWE talent, company CEO Vince McMahon has notified it’s professional wrestlers that they have 30 days to stop “engaging with third parties” unaffiliated with WWE. According to Wrestling Inc., WWE let the wrestlers know that it was important for people to stop using third-party platforms in order to “promote and protect the brand in every conceivable way.”

To earn some money during the COVID-19 pandemic, some pro wrestlers have taken to sites such as Cameo and Twitch, in addition to utilizing social media and YouTube, to reach out to fans and make a few extra bucks. Because the pandemic has resulted in a lack of live events, there’s less opportunity for pro wrestlers to make money. While that can be beneficial in some ways as wrestlers are no longer on the road 300 days out of the year and can preserve their bodies by wrestling less often, a lack of events and ticket revenue is going to result in lower payouts after they exceed their yearly downside guarantee.

While these social media accounts are typically unaffiliated with WWE, some wrestlers have been able to showcase themselves in a way that gets them closer to fans and “get over” as a performer. That’s especially important at a moment when TV time on Raw, SmackDown, and NXT is so limited that few wrestlers are consistently seen each week.

Supporting yourself with a side hustle isn’t going to fly with McMahon and WWE and they’ve decided to bring the hammer down. Viewing these kinds of interactions done on third party sites are “detrimental” to WWE, the company is demanding wrestlers stop using these sites by October 2 or else be subject to “fines, suspension, or termination at WWE’s discretion.”

“Some of you are engaged with outside third parties using your name and likeness in ways that are detrimental to our company,” McMahon wrote. “It is imperative that these activities be terminated within the next 30 days (by Friday October 2). Continued violations will result in fines, suspension, or termination at WWE’s discretion.”

McMahon wrote that these actions are necessary as part of WWE’s rebuilding process as they “enter the next phase of growth at WWE.”

While this is going to end up being a very unpopular mandate among fans and wrestlers, WWE could argue that they have the right to do this in order to protect their intellectual property. It’s one thing for a wrestler to start a Twitch channel to interact with fans while playing Madden. But if that leads to someone using their WWE character name to promote a product that’s a direct competitor to one of WWE’s sponsors, or one of their wrestlers revealing he had COVID-19, that’s something WWE is not going to like. That, or in a more business-minded scenario, if someone is using their WWE character name to make money on something unaffiliated by WWE, the company may feel entitled to a cut of the profits.

Banning wrestlers from making extra money on third party deals – twitch, YouTube, cameo – strikes me as a crummy thing to do.

At the same time, this further blurs the line of what an “independent contractor” is and how a company like WWE can make requirements of them. WWE professional wrestlers are not employees, they’re independent contractors. WWE wants to keep their wrestlers as independent contractors so that they don’t have to provide benefits like health insurance. But unlike typical freelance deals, a WWE contract usually keeps them from working elsewhere unless they have permission from the company. WWE can and should protect their intellectual property, but if that results in denying working professionals the right to work and make money in non-WWE circles, then they aren’t freelancers.

If I’m not the Secretary of Labor I’m pretty confident I’ll have his or her number to talk about the ridiculous classification of WWE wrestlers as independent contractors while controlling their name and likeness for years, even for something as benign as Cameo.

Some wrestlers have already made changes to their third-party accounts. Multiple wrestlers on Cameo have either already used their real name or they just recently changed the account to be under their real name. Paige, who is retired but remains under contract at WWE, changed the username for her Twitch channel to her real name and now makes no further references to WWE.

It remains to be seen if doing that will be enough to satisfy WWE. Especially as the company reportedly said they owned real names of their wrestlers as well, although that has since been disputed. While you could probably take WWE to court over some of these demands, suing them pretty much means you’re not appearing on TV anytime soon, even if you’re in the right.

The mandate still seems somewhat vague but maybe that’s something WWE prefers. That gives WWE the latitude to pick and choose who is in the clear and who isn’t, which allows them to exert more control over their wrestlers. It might not be fair or consistent, but if we were looking at what was “fair” in WWE, the wrestlers would’ve been considered employees a long time ago.