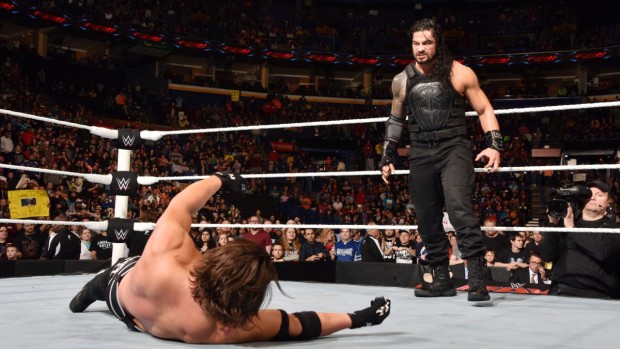 The ongoing saga between WWE World Heavyweight Champion Roman Reigns and No. 1 contender AJ Styles reached another level on Monday night Raw as the show ended with Reigns driving Styles through the announce table with a vicious Powerbomb.

It was a really good ending, setting the stage for their WWE Title rematch at Extreme Rules. That match will be different than what we saw at Sunday’s Payback event because it’s going to be an Extreme Rules match. A match like that basically means there are no rules because you can use weapons, there are no counts or disqualifications and while there probably won’t be blood, this will be one of the most physical matches of the year. That’s why it’s smart to do a big Powerbomb through a table spot because you’re telling the audience what’s going to happen when they have their big match on May 22.

A backstage segment between Styles and his buddies Luke Gallows & Karl Anderson was interrupted by Roman Reigns, along with his cousins, The Usos. That led to a six-man tag match later in the show, which was a smart idea because it was the first time that WWE has done that match.

The bout was a basic tag match with Styles’ team working as the heels, since they isolated Jey Uso for much of the match. That doesn’t mean that Styles is a heel. They just wanted to build up the hot tag to Reigns as a big deal. Even with Reigns getting the hot tag, he wasn’t able to get the win. He was taken out by Gallows and Anderson outside the ring. Styles ended up getting the win with the Phenomenal Forearm on Jimmy Uso. It was a way to protect Reigns from getting pinned while making Styles look great.

Post-match was full of action too. Gallows and Anderson wanted Styles to hit Reigns with a chair. Styles refused to do it because it was cheap. The Usos ended up saving Reigns with a chair to AJ’s back, then AJ got the chair back and hit both Usos. Reigns saw that, was really mad about it and sent Styles out of the ring. That led to Reigns hitting the Powerbomb through the table. Raw ended with Reigns standing over top of the fallen challenger.

It was a really strong end to Raw, which was needed because the previous three hours of action were just average. The main event storyline is hot right now. There are all kinds of questions about whether Reigns or Styles will turn, as well as the arrival of Finn Balor to the main roster. That’s been rumored for months now and I actually thought we’d see Balor on Sunday or Monday, but it didn’t happen. Maybe Extreme Rules later this month? Maybe several months down the line? We don’t know right now and that’s okay. It keeps things interesting.

Heading to Extreme Rules on May 22, the expectation here is that Reigns is going to retain the WWE Title. While Styles is likely going to be a future WWE Champion, it just feels like WWE wants to give Reigns a long run as champion that lasts until later in the year, rather than just a two-month thing. It makes sense because if he’s going to be “The Guy,” he should carry the gold as long as possible.

Here’s a rundown of this week’s matches on Raw with quick notes on each:

Owens wanted a rematch for the Intercontinental Title, Cesaro said Owens cost him the IC Title on Sunday, so they had this match. It was competitive for about 10 minutes, and then Cesaro nailed The Miz at ringside when Miz was doing commentary. That led to Miz attacking Cesaro, which caused the disqualification finish. Sami Zayn got involved too and he managed to clear the ring. All of it was done to set up what will likely be a four-way IC Title match at Extreme Rules with Miz, Owens, Cesaro and Zayn.

It was just a comedy match that Breeze won with a rollup after about two minutes. This Goldust angle with R-Truth has been going on for four months. Is it ever going to end? I don’t think people care if it does.

This eight-man tag match was set up after a promo exchange by all eight guys that are part of tag teams. Big Cass got the hot tag for his team, cleaned house and was able to get the decisive pin on D-Von. That was the right call, since there was a lot of sympathy for his injured partner Enzo Amore.

A solid women’s match to try to establish Emma as a heel women’s wrestler that is on the rise. Lynch hasn’t been on TV enough since WrestleMania, so it was good to see her out there. Emma got the cheap win following an eye poke (that the ref didn’t see) leading to a pin after a Michinoku Driver. Quality win for her.

Rusev won a battle royal to earn US Title match

There was a battle royal to determine who gets a shot at Kalisto’s US Title. They brought back Titus O’Neil for this following his suspension, but he didn’t do much. It was about former League of Nations members Sheamus, Alberto Del Rio and Rusev along with Zack Ryder. After Sheamus and Del Rio were eliminated, it could have been a good story with Ryder winning, but he ended up losing to Rusev. The ending was well done. Rusev was the right choice for the winner. He should probably beat Kalisto for the US Title (likely at Extreme Rules) as a way to get him going again.

As mentioned earlier, Styles was able to get the win with his Phenomenal Forearm Smash on Jimmy. It was the right call to put over Styles and his buddies, since Styles lost to Reigns on Sunday. Plus, it continues to make Gallows and Anderson look like threats, which is what is needed for them since they are still new to the WWE roster.

There weren’t any great matches on this show, which hurt it a bit. The tags were fine, but felt too formulaic.

1. It was pretty annoying listening to WWE push the “new era” term with Shane McMahon and sister Stephanie running the show. The McMahon family has been dominating WWE television for nearly 20 years, yet they keep trying to tell us this is new. There was only one on-screen segment with Shane and Stephanie as they bickered in the ring, while not really announcing anything significant.

Stephanie was all over this show in what was her return to television after being off for the past month. Shane wasn’t even seen after the opening segment. It showed that WWE put a priority on making her a big focus this week, which again doesn’t feel “new,” considering how much TV time she usually gets. It’s not like she’s a bad performer. The act is just very tired at this point.

2. Dean Ambrose’s “Ambrose Asylum” talk show came to an end when he had Stephanie as a guest, insulted her a lot and then she ended the show. That led to her announcing that Chris Jericho’s Highlight Reel show is back. Jericho ended up winning a battle against Ambrose (just like last week on Raw) that included Jericho smashing a plant (named Mitch by Ambrose) on the back of Ambrose’s head.

It looks like the Ambrose/Jericho feud is going to continue at Extreme Rules. That’s a good thing because their Payback match was really good. Look for a stipulation to be added to it too. Ambrose should win a second time if they do the match again.

3. Another feud carrying over from Payback is between Charlotte and Natalya. After Charlotte retained the Women’s Title at Payback due to referee Charles Robinson calling for the bell too early, fans were upset about it. They followed up on Raw with Robinson admitting he was a family friend of Charlotte’s dad Ric Flair (an angle they did in WCW back in 1999), but that he was fair. That was a lie, of course, but it fit the story. Natalya confronted Charlotte, blamed Flair for what happened, slapped Charlotte and put Flair in a Sharpshooter to end the segment. The crowd seemed to love it.

All of it is going to lead to another match between them at Extreme Rules with Charlotte defending the Women’s Title against Natalya in a Submission Match. To make it even more fair, Ric Flair is banned from ringside. That should be an awesome match.

Looking Ahead To WWE Extreme Rules

The next WWE PPV is Extreme Rules, which takes place on Sunday, May 22 in Newark, New Jersey. Here’s the full lineup:

These other matches aren’t confirmed yet, but they are likely after what happened on Raw.

That’s seven matches already. They can probably add one or two in the next month. No surprise that the lineup is nearly set since there’s only three weeks between PPV events.

It felt like an average edition of Raw this week, although they ended it on a high note with that great angle where Reigns put Styles through the table. That was the kind of thing that will add to the intensity of their WWE Title feud and allow them to get to another level when they have that Extreme Rules match.

On a positive note, the fact that the best storyline right now is the main event is an encouraging sign. Let’s hope the rest of the storylines have that same level of interest as we head to Extreme Rules.