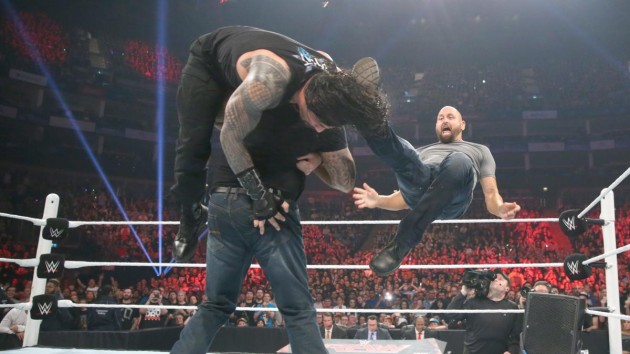 Raw was taped in London, England this week. The results of the show were available on the internet a few hours before it aired on USA Network and other channels around the world. Because of that, there just wasn’t as much of a buzz compared to last week’s excellent show, which I felt was the best Raw of the year.

The big storyline this week involved WWE Champion Roman Reigns and the No. 1 contender for his title, AJ Styles. The two men will meet at WWE Payback on May 1 in Chicago. It would be a shock if Reigns were to lose at Payback after less than a month as WWE Champion, but you never know.

Following their face to face promo, Styles left the ring and Reigns was attacked from behind by Luke Gallows and Karl Anderson – the two men that debuted on Raw one week earlier after coming to the company from New Japan. They gave him their double-team move that was a kick to the head by Anderson leading to a slam by Gallows.  Earlier on Raw, they were shown greeting Styles backstage in a manner that put over their friendship.

After the attack, Styles went up to Reigns to say that he had nothing to do with that. Reigns didn’t seem to believe him while also mentioning that Gallows/Anderson attacked his cousins The Usos last week as well. Styles even “swore to God” when he denied it. Now it’s up to the viewer to decide what they believe.

There are a number of ways they could go with this. Styles could be right in saying he had nothing to do with it, but perhaps at the Payback match, he is behind it. They could also use this angle as a way to debut current NXT Champion Finn Balor on the main roster. In New Japan, it was Balor that started the Bullet Club and Styles joined after Balor had signed with WWE, while Gallows and Anderson were mainstays in the group.

Another option, which I think is very possible, is that Reigns is actually behind the attacks. It sounds weird that he would have guys attack him, but if he’s going to turn heel as many of us expect, then he should have some “muscle” behind him. This isn’t New Japan and there’s no Bullet Club name for WWE to use. Instead, they can say that Reigns is the one that brought them to WWE and that they are a part of his Roman Empire.

If Reigns were to lead Gallows/Anderson as a heel stable, they could dominate for months. Then Seth Rollins comes back as a face soon, he teams up with Dean Ambrose, and maybe Styles teams up with the former Shield guys. It would be an awesome feud to carry WWE through the summer months. Balor’s an option to get involved there too.

Those are just some ideas. All I really know is that the introduction of Gallows & Anderson has gone really well so far. Putting questions in the minds of the audience is what you should do with a storyline like this. More storylines like this are necessary by WWE. It is going to add a lot of interest to the Reigns/Styles match. Reigns will probably retain, but how does it happen? That’s why we have to watch.

On a side note, some English fans that attended Raw have said that WWE clearly edited the boos for Reigns. They said it was hard to hear anything at the show, yet on the TV broadcast it wasn’t that bad, even though you could hear the boos.

If you’re clamoring to see Gallows and Anderson in action, they make their WWE TV debut next week on Raw. Of course, Gallows was in WWE for years before in the late 2000s, but not with Anderson at his side.

Here’s a rundown of this week’s matches on Raw with quick notes on each.

Chris Jericho d. Sami Zayn – It was an exciting match between two really good in-ring performers. Zayn lost after Jericho poked him in the eye (ref didn’t see it) and hit the Codebreaker to win. Zayn has lost two weeks in a row on Raw. He’ll need some big wins soon.

Enzo Amore & Colin Cassady d. The Dudley Boyz – This was a semifinals match in the tag team tournament. The heel Dudleys worked over Enzo, Cass got the hot tag and they won shortly after. Crowd was into it.

Baron Corbin d. Fandango – A short match that Corbin won in about two minutes. After the match, Corbin beat up Dolph Ziggler with his End of Days finishing move. Poor Dolph.

Big E, Xavier Woods, Kofi Kingston & Cesaro d. Sheamus, Rusev, Alberto Del Rio & The Miz – They set this up on a Miz TV segment with Cesaro announcing that Shane McMahon made this an eight-man tag match. Cesaro got the win for his team by pinning Sheamus after everybody was hitting signature spots. The win gives Cesaro momentum going into his IC Title match against The Miz at Payback.

Natalya, Becky Lynch, Paige & Sasha Banks d. Charlotte, Summer Rae, Naomi & Tamina – It was bizarre to see them follow up an 8-man tag with an 8-woman tag, but that’s what they did. Spacing them out would have been better. Natalya made Charlotte submit to the Sharpshooter. They will face off at Payback.

Apollo Crews d. Heath Slater – Another quick win for Crews, who debuted on Raw three weeks earlier. He had a brief staredown with Kevin Owens prior to KO’s match, so that could be a future feud.

Dean Ambrose d. Kevin Owens – An old rivalry was renewed as Ambrose managed to beat Owens clean with the Dirty Deeds DDT. Like all their matches, it was competitive with a lot of good nearfalls. They got around 15 minutes. It just didn’t feel fresh since we’ve seen the match so many times before.

To end Raw, Jericho attacked Ambrose after his win and dropped him with a Codebreaker. They are set to meet at Payback.

1. It was also another show where Shane McMahon was put in charge despite losing to The Undertaker at WrestleMania. No sign of Vince McMahon to try to explain this storyline better.

Why not have Vince do a quick promo to say Shane is in charge until Payback and then on the Raw after that, Vince will re-evaluate who gets to run Raw. They could bring back Triple H and Stephanie at that point in order to rekindle the storyline.

All we want is for the major storylines (and really, any storyline) to make sense, yet here we are trying to deal with this every week. A little effort would be nice. 2. Bray Wyatt was not mentioned on Raw, even though he was in the main event last week. That’s because he suffered a calf injury during a live event in Europe against Reigns. It just happened when he did a lockup. There’s no word on how long he may be out. If it’s a strained calf, it could be two to four weeks. If he needs surgery, it could be months. Hopefully, it’s just a strain because you can definitely come back from that.

In terms of storylines, it means that the Wyatt Family face turn leading to a feud with the League of Nations is on pause right now. I imagine they would pick it up when Wyatt’s ready to return to action. 3. It looks as though the Social Outcasts will carry on as a three-man team since Adam Rose was suspended for 60 days for his second Wellness Policy violation. The announcers didn’t even mention him or why he wasn’t out there with Slater, Dallas and Axel, as Crews defeated Slater easily.

Konnor of The Ascension is also suspended for 60 days for his second Wellness Policy violation. Since The Ascension are barely on television anyway, it’s not that big of a deal. But it sucks for his partner Viktor because he likely won’t get any TV time with Konnor out.

Looking Ahead To WWE Payback The next WWE PPV is called Payback on May 1, which is taking place in the Chicago area at the Allstate Arena. As of this writing, here are the confirmed matches.

A typical PPV event has seven or eight matches, so look for one or two more matches to be added within the next week. If I had to guess, Corbin vs. Ziggler seems to be the most likely. Perhaps there will be an Apollo Crews match too.

While this episode of Raw wasn’t as good as last week’s best Raw of the year, they did provide us with a couple of good midcard matches with Ambrose beating Owens and Jericho beating Zayn. Matches like that show how much depth WWE has, although the results of those matches don’t seem to matter because of the dreaded 50/50 booking that exists.

The road to Payback has been above-average, thanks to some new matchups on the horizon, as well as the absence of the stale Authority act. However, in order for WWE to really put out some consistently good material, they need to keep doing big angles like whatever is happening with Anderson and Gallows, as it pertains to Reigns vs. Styles. That’s the stuff that will really get the audience talking. Word of mouth is the best buzz there is.