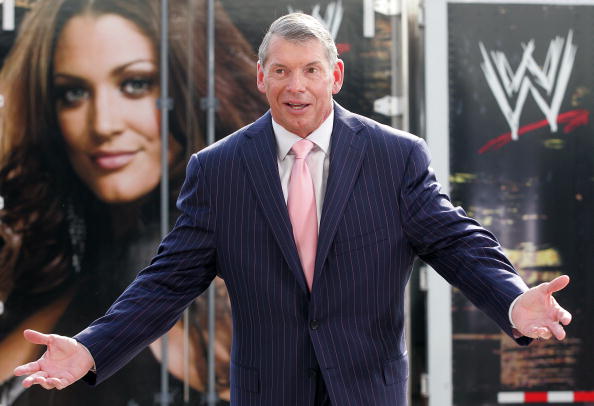 In May 2014, things weren’t looking great for WWE. The sports-entertainment giant had just signed a new television deal with NBC Universal that failed to meet expectations in rights fees. The increase from $90 million annually to $150 million domestically didn’t quite match what investors had hoped for. After the TV deal was announced, WWE stock fell as far as 50% and it was so bad that Vince McMahon lost his billionaire status overnight. It made that episode that he got blown up in a limo on live television seem like the best of times.

Additionally, WWE Network had just launched earlier in the year and the complete restructuring of the company’s business model left a ton of questions for what the future may hold. Fast forward four years and the state of WWE’s business has never been better.

WWE made it official this week, announcing a new deal that would see SmackDown move to network primetime on Fox with USA maintaining the rights to Monday Night Raw. Beginning in 2019, SmackDown moves to Fridays on Fox with the network transforming their programming strategy to put an emphasis on more sports and live events. For WWE, it’ll be the most exposure the company has received on network television since the days of Hogan and Andre on The Main Event on NBC.

Even better than the network primetime timeslot is the money. The latest rights deal with USA & Fox at a cool $468 million annually is more than three-and-a-half times what WWE is making now. It’s obviously a game changer for the company in a number of ways, but it’s astounding to see just how much WWE stock has grown since the mid-2014 crisis period. Just look at how WWE stock has recovered since 2014.

The dip you see in 2014 in the chart below is thanks to the disappointing television deal. At that point, WWE stock fell as low as the $10 range. Now, WWE stock sits at six times that value at $66.62 per share. In just the past year, the stock price has more than tripled from when it was at $20.38 a year ago. 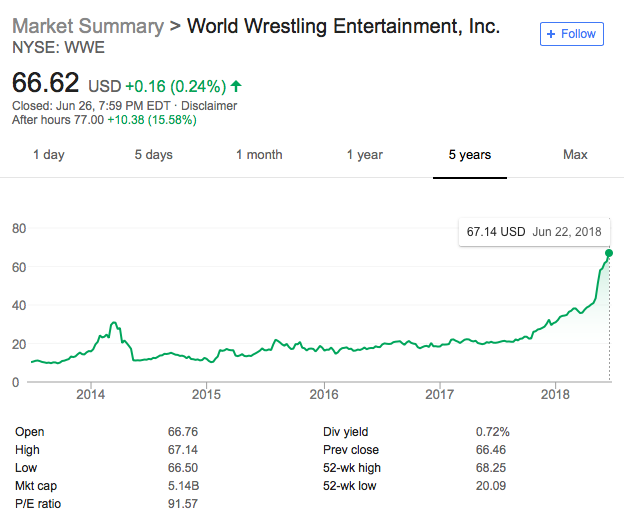 How has WWE pulled off such a remarkable turnaround?

Especially when one considers WWE is far from the cultural heights and television ratings it saw in the Attitude Era (when The Rock was still Rocky Maivia and not the world’s biggest movie star), it’s all the more surprising. And as much as WWE has tried to push Roman Reigns as the next face of the company, the fans have soundly rejected it and WWE creative has never been more scrutinized as more and more fans have been smartened up to the business. So why was Fox willing to part with a billion dollars to make such a huge investment in pro wrestling?

First, WWE still has a virtual monopoly on the pro wrestling business nationwide. While companies like Impact, Ring of Honor, Lucha Underground, and New Japan Pro Wrestling have their devoted followers, none can match the global impact of WWE. In fact, one could argue that none of those companies are really trying to compete with WWE on a head-to-head basis, but are trying to find other pathways to succeed. So even though ratings aren’t what they once were, they are still good and remarkably consistent.

Right now SmackDown averages 2.5 million viewers on USA on Tuesday nights. If the move to Friday results in a slight downturn and the shift to network TV results in a slight uptick and that evens out, that’s a pretty decent number for Fox to pull in every single Friday night.

Second, and perhaps most importantly, Fox is a perfect partner for WWE right now. With the network moving to a completely new strategy for primetime, WWE fits perfectly into the “new Fox” focused on live events and going further away from scripted television. As weird as it might be to get used to, next fall you may see Joe Buck reading SmackDown ads during Thursday Night Football. WWE will bring a consistent audience every single week and clearly Fox thought it was worth a billion dollars to anchor this new lineup.

In an age where the question about the sports rights bubble bursting always seems to be on the horizon, it proves once again that all a major league or organization needs is the right dance partner to make a huge deal. Is it a gamble for Fox? Sure. But it also proves that traditional television hasn’t completely been passed by thanks to streaming services.

And that may be the true brilliance of how WWE’s stock has soared. Because not only do they now have a billion dollar TV deal to hang their hats on, but WWE Network continues to grow on the streaming side. During their last earnings report, the company reported a 5% increase to 1.56 million subscribers for the network. The network continues to add new original programming to go along with its massive archive of every major wrestling promotion that ever existed to continue to move forward. Perhaps the smartest thing Vince McMahon has done is push WWE Network forward while also preserving the exclusivity of Raw and SmackDown for his television partners.

The success of WWE should be a signal to every league and sports network that you can be a dual success with streaming platforms and traditional television.