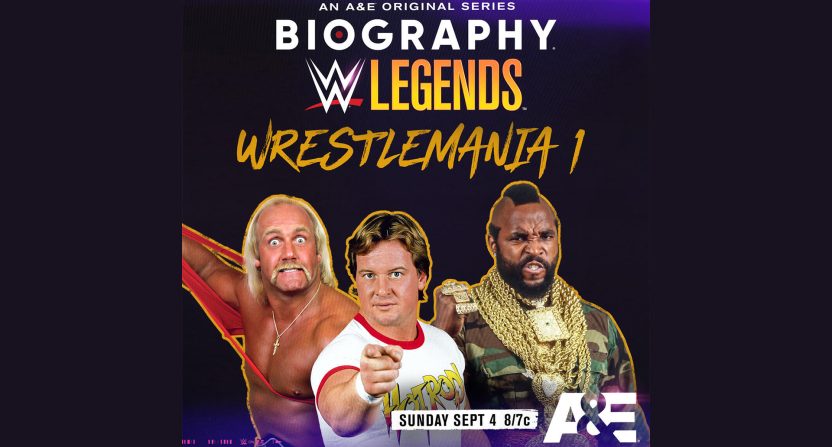 On Sunday, A&E will air their season finale of Biography: WWE Legends. Instead of looking at a person or faction, they’re looking at one of the most pivotal events in WWE history.

WrestleMania I was a game-changer for WWE and the pro wrestling industry. The success from the first Mania at Madison Square Garden vaulted the company to do other shows like Survivor Series, Royal Rumble, and SummerSlam, and eventually become a publicly traded company.

In an interview with Awful Announcing, WWE Hall of Famer Jimmy Hart detailed just how much of a risk then-chairman Vince McMahon was taking with WrestleMania.

“[Vince] is a genius…I’m sure they borrowed money, they got money, they put liens up on their houses and everything else,” Hart said. “He had a lot of the agents, from what I heard, tried to talk him out of it. Like Chief Jay Strongbow, ‘Caesar, this is never gonna work.’ They called [Vince] ‘Caesar.’ Arnold Skaaland and the others, ‘Are you sure you’re doing the right thing, man? This can really blow up in our face.’ But thank God he had this dream, because buddy, it worked.”

Jimmy was new to WWE at the time of WrestleMania I. He had just arrived after spending seven years in Memphis Wrestling. Memphis was similar to WWE in regard to having more of a “sports entertainment” vibe, and the most memorable storyline he was involved in was Jerry “The King” Lawler’s feud with actor/comedian Andy Kaufman. A few years later, WWE utilized celebrities from the start of WrestleMania, and they were a big part of the event’s success.

You had Cyndi Lauper, who was at the time maybe the biggest pop star in the world, managing Wendi Richter to the Women’s Championship. Mr. T, who was on one of the top shows at the time with The A-Team, was in the main event with Hulk Hogan against “Rowdy” Roddy Piper and Paul Orndorff. Muhammad Ali was the special guest enforcer, while Billy Martin did the ring announcing, Liberace was the timekeeper, and The Rockettes performed. Hart agreed that having celebrities involved transformed WrestleMania into something nobody experienced before.

“Well, I think that really took us to a different step,” Hart said. “Something that a lot of people had never seen before. And I think to this day you see a lot of the other companies using a lot of celebrities now that Vince and WWE really created back in the day. So, I think it’s now a major part of everything. It makes you kind of bigger than life. It makes you kind of accepted to other people.”

That celebrity involvement is still seen today, especially at WrestleMania. Mike Tyson as the special guest enforcer at WrestleMania XIV was a turning point in the “Monday Night War,” which WCW arguably never recovered from. In the past couple of years, WWE has embraced modern pop music with Bad Bunny, YouTube culture with Logan Paul, and nostalgia with Johnny Knoxville.

And that cross promotion helps the celebrities just as much as it helps WWE. I was aware of Bad Bunny, but I couldn’t name one of his songs to save my life. I had to see him tear the house down at WrestleMania 37 before I got to know him and like him. Just like a lot of Bad Bunny’s fans tuned in to watch a WWE event for the first time ever just to see him compete, and some of them may have become WWE fans as a result.

1985 was right in the middle of Hulkamania. At the time, Hulk Hogan was WWE Champion for over a year. And in that time, Hogan was out and about promoting WWE and becoming a mainstream star. Hogan was in Rocky III and was a guest VJ for MTV. And in the buildup to WrestleMania I, he did the talk show circuit and guest-hosted Saturday Night Live with Mr. T the night before the show. In the years that followed, Hogan would appear in more and more TV shows and movies, and he became arguably the most recognizable pro wrestler ever.

“Well I think all of it worked hand-in-hand but, especially with Sylvester Stallone. and once he did [Rocky III], then he became a little piece of Hollywood I felt like,” Hart said. “But think about it, he couldn’t get on Jay Leno or anybody if Jay Leno and these people didn’t want him on there. So, they knew how big this WrestleMania thing was taking place and what was happening, and Hulk and the movies and everything too.”

“Him and Vince were tag team partners together. Vince used to always say, ‘Two sticks are harder to break than one.’ And he’s right about it, but him and Hulk, when Hulk came out of Minneapolis, Minnesota down there to New York, he lived up in Stamford, they worked every day together and kind of kicked all this stuff off back in the day.”

“With his name, of course [he’s] bigger than life. Look, you can’t make people buy a ticket to see you if they don’t like you… Hulk had a great TV exposure and a great presence, but all of a sudden, when you’re starting to sell hundreds and hundreds of thousand of dollars of merchandise month after month, then that means the people love you, buddy.”

Awful Announcing was able to watch a screener of the WrestleMania I episode of Biography: WWE Legends, and it was great. One thing I really enjoyed was that the producers did a good job showing Cyndi Lauper’s impact to WWE’s success in this era. She randomly met Captain Lou Albano on a flight; Albano played her father in ‘Girls Just Wanna Have Fun.’ That collaboration resulted in Lauper forging the partnership between MTV and WWE to begin the “Rock ‘n’ Wrestling Connection” phenomenon. And unlike some other celebrities, Lauper was genuinely enthusiastic to promote WWE and pro wrestling wherever she was.

That being said, for some reason, Lauper’s role has been somewhat minimized over the years. She still isn’t in the celebrity wing of the WWE Hall of Fame, and while it’s possible that’s her decision, it remains an issue given other celebrities who have done far less for the industry are inducted. Lauper and Wendi Richter get a sizable portion of screen time in the two-hour episode, and it may result in fans speaking out in support of Lauper to go into the WWE Hall of Fame once and for all.

A&E has profiled so many stars over the past year, and they will return with 35 new episodes. Hart was asked who should be profiled, and he had a couple of ideas, one of which may actually be a future episode.

“Well, I think they’re going to do one on Jerry ‘The King’ Lawler coming up. So, I’m hoping I’m a major part of it because he was a major part of my career and vice versa,” Hart said. “So, hopefully, they’ll use me for that. But you know what, I would like to see one on Jimmy Hart one day because after all, we did do a lot of the music for the company.”

“So, I’d love to do something with them if they ever did one on me about one of the few managers that’s out there now, and being a part of WrestleManias, and SummerSlams, and Royal Rumbles, and all that. And still out there doing promotion and having a great music career too. Not only with Dick Clark and MGM Records and touring with The Beach Boys (as The Gentrys), but doing a lot of the [pro wrestling] theme songs. We had over 65 or 70 of the theme songs with some of the top characters they got that they’re doing some of the interviews on, so I’d love to see a Jimmy Hart one, one day.”

Hart was very proud to take part in WrestleMania I. He was involved in two matches, managing King Kong Bundy in one match and Intercontinental champion Greg Valentine in another. Hart summed it up best just how important WrestleMania I was for him and the pro wrestling industry.

“When people ask me when I’m out doing interviews, ‘What’s the greatest moment of your life as far as wrestling goes?’ And I say, ‘You know, there was a couple of them, but number one was WrestleMania I. Because if it had not been successful, we wouldn’t be talking on the phone or doing TV now.'”