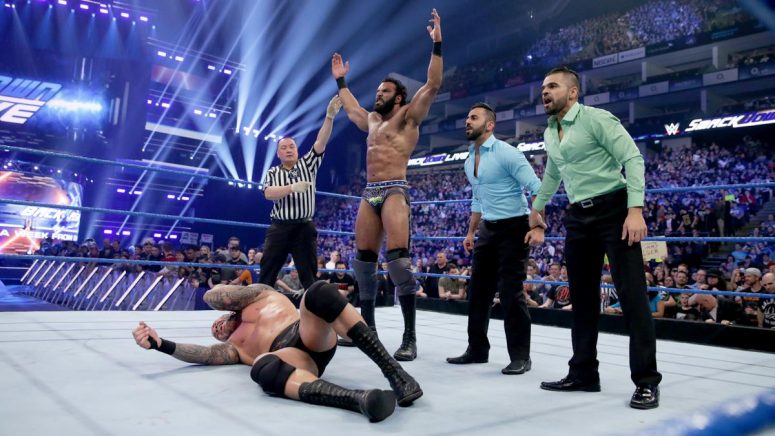 The focus of this week’s edition of WWE Smackdown Live was once again the rivalry between WWE Champion Randy Orton and challenger Jinder Mahal. They were a part of a six-man tag match main event while also building two other rivalries on the show.

Smackdown began with Orton talking about how he lost to Bray Wyatt at Payback because of Mahal’s attack. Mahal interrupted the promo to say that he’s going to be the next WWE Champion. That led to Kevin Owens, the United States Champion, noting that he was the Face of America and after he’s done beating AJ Styles at Backlash, he’s going after the WWE Title to become the Face of WWE as well.

Styles was out next to talk trash to Owens and it was clear that Styles was the biggest name to the fans in London. He got the loudest ovation, yet he’s not in the WWE Title picture anymore. Styles was followed by Baron Corbin and Sami Zayn showed up to brawl with Corbin in revenge for two weeks earlier. The three faces cleared the ring and it led to a tag match later in the night.

I wonder what percentage of Raw and Smackdown episodes have an opening promo segment leading to a match later in the show? It probably happens at least 75 percent of the time, if not more.

The main event went 22 minutes with two commercial breaks taking place in the final 30 minutes of the show. The heel trio worked over Sami Zayn for most of it and then they worked over Styles. It was all done to build up to the hot tag to Randy Orton, who got to face off with Mahal. From there, it led to all six guys hitting big moves.

After Orton hit Kevin Owens with a RKO (everybody else was already out of the ring), Mahal attacked Orton from behind and hit a Cobra Clutch Slam on him. Mahal covered Orton, so the big thing the announcers were pushing is the idea that the challenger Mahal pinned the champion Orton less than two weeks before their Backlash match.

It was standard booking because WWE has made it a point to try to elevate Mahal over the last month. He won the No. 1 Contender match three weeks ago, then he beat Sami Zayn in a singles match and there he is pinning Orton this week. Are the fans buying into it? I’m not sure of that because he barely gets a reaction. Also, when I watch Mahal in the ring he really doesn’t stand out much or come off like a star at all.

I don’t think Mahal will win the WWE Title at Backlash. Could I change my mind? Sure, but I doubt I will. Since Rusev is looming on the horizon as a potential opponent for the WWE Title, I think he’s a much better option as the next champion rather than Mahal. We’ll find out what WWE does at Backlash in less than two weeks.

Here is the other action from Tuesday’s Smackdown.

They had a decent match that only got about four minutes. I liked the physicality because they are both good strikers. It was fast-paced without rest holds since they knew they didn’t have much time. Natalya got a cheap win, thanks to some help from her buddy Tamina.

The finish was similar to the Bliss/James match on Raw where Nia Jax distracted Mickie while she was on the middle ropes and Alexa hit a forearm to win. In this case, Tamina did the distraction and Natalya pulled Lynch off the ropes leading to the finish. It’s weird to see something so similar two nights in a row.

Later in the show, Lynch got together with Naomi and Charlotte backstage to issue a challenge to Natalya, Tamina and Carmella for Backlash. The heel trio are called the “Welcoming Committee,” which isn’t a very good name, but that is what they are using.

The former Wyatt Family members had a physical five-minute match with Rowan in the heel role and Harper as the face. Going into it, I thought Harper would get the win because Rowan rarely wins. But Rowan was able to get the victory, thanks to a thumb to the eye and a spinning slam.

I think these guys would be better off as a team like they have been in the past. Harper is more likely to rise as a singles wrestler of the two, but I’m okay with WWE seeing what they can get out of Rowan. They tried it a few years ago with Rowan as a face and it didn’t work. Maybe a singles heel run will work for him.

There was a “Fashion Files” vignette for Breezango like last week. I thought last week’s was better. The match was a quick win for Breezango, who got the victory in three minutes after a top rope leg drop from Fandango. No surprise there because Breezango are getting a title shot at Backlash while The Ascension have nothing to do like usual.

After the match was over, The Usos did a cool promo with Jey saying “12 days” repeatedly about their match at Backlash and Jimmy was ranting about things they are going to do. They ended it with their bit saying it’s not paranoia, it’s The Usos. I like their heel promos a lot. It’s letting them show off their personalities, which is great.

Other Key Items From Smackdown

1. Ziggler called out Nakamura and set up their Backlash match

Dolph Ziggler did a promo ripping on the fans. It was a much better promo than what he did two weeks ago that just didn’t click. He talked about how for eight years he was busting his ass for them, but it was never good enough for them. Ziggler went on to say that the crowd loved a guy like Nakamura even though he’s never had a match on the main roster. Fans chanted “NXT” because of Nakamura’s great run there last year and Ziggler called him out.

Nakamura made his spectacular entrance and told him to shut up. They teased having a match there and a ref even went into the ring, but Ziggler told him they will do it when he wants at Backlash. Ziggler tossed his jacket on Nakamura, attacked him a bit and Nakamura came back with knee strikes to the ribs. Nakamura kicked him out of the ring to end the segment.

I think they should have had Ziggler get the upper hand this time. Every time they have interacted, it has been about Nakamura looking dominant. Why do that every single time? It would be nice if they changed it up and had Ziggler lay him out with a superkick. I think WWE needs people to believe that Ziggler may beat him, even though it’s obvious Nakamura will win the match at Backlash.

2. Rusev will “debut” on next week’s Smackdown

If you don't want to reply to me @shanemcmahon, I come to #SDLive to get my answer. #RusevReturn pic.twitter.com/Ddu6QOSDh6

Rusev did a quick promo that he originally posted on Twitter saying he’s only going to Smackdown if he gets a WWE Title match at Money in the Bank in June. He said that he never got an answer from Commissioner Shane McMahon and that he didn’t like being ignored because it’s disrespectful, so he’s going to Smackdown next week to get an answer.

Rusev has been out for a couple of months with a shoulder injury, but he should be back in the ring soon. I think he’ll get that WWE Title match at Money in the Bank and he might win it. They could reboot his career by putting that title on him if he beats Randy Orton for it.

Looking Ahead to WWE Backlash

The next Smackdown pay-per-view is Backlash in Chicago on Sunday, May 21. Here’s the announced lineup so far.

Another likely match is Baron Corbin vs. Sami Zayn.

If I had to guess, I think Owens vs. Styles will go on last and Nakamura vs. Ziggler is possible as the closer as well. I don’t think Orton vs. Mahal is likely be the actual main event because the other matches seem bigger to me.

I thought it was a pretty good show and better than Raw this week. While Smackdown has lost a bit of steam that it had before the Superstar Shake-up, they are doing a good job of giving time to midcard performers to try to get them over more. I’m not a huge fan of the Jinder Mahal push, but at least they are trying their best to elevate the guy by giving him wins. I’d prefer more of a focus on AJ Styles and Kevin Owens. For now, Jindermania is running wild. After Backlash, it might not. I’m interested to see what happens.

Next week: Rusev comes to Smackdown looking for answers. No matches announced yet, but the announcers will do their best to tell us how great Jinder Mahal is. I’ll be back next week for more.