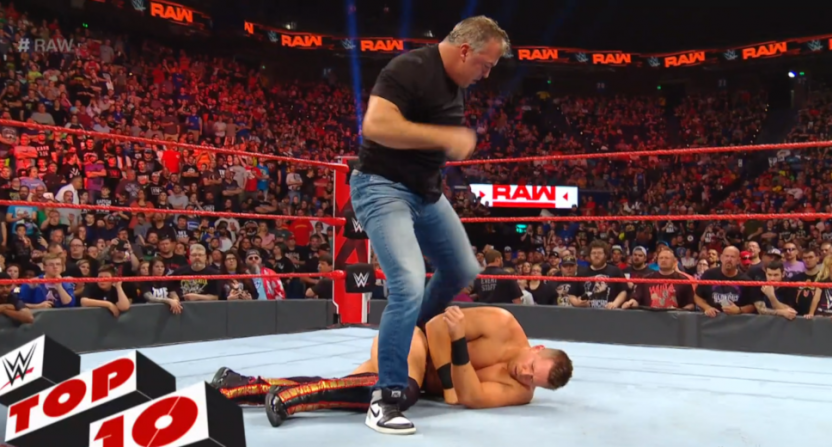 WWE’s stock isn’t the only thing that seems to be falling.

Last week, the pro wrestling conglomerate saw its stock price fall by over 10 percent in one day after its first quarter earnings report fell short of investors’ expectations. (It closed Tuesday at $83.85, down $14.29 and 14.6 percent from last Wednesday’s$ 98.14 close.)  At the core of WWE’s downturn is declining revenue and television ratings. WWE worked hard to try to spin the ratings news as not being that bad, but it was fairly easy to poke holes in some of their proclamations in comparing their own numbers to televised sports.

WWE’s going to have to work a lot harder the next time around because the ratings news isn’t getting any better. Once again, the company has hit a record low for its flagship program, Monday Night Raw. According to the Wrestling Observer‘s Dave Meltzer, Raw drew a paltry 2.16 million viewers for this week’s program, a new low for a non-holiday edition that didn’t face competition from Monday Night Football. What may be most discouraging is that it went down 9 percent from the previous low, which was set just last week.

Raw set yet another all-time modern low outside of football season last night with 2.16 million viewers.

The show only beat episodes this past New Year’s Eve and Christmas Eve for the record-low mark. What’s really scary is this was a nine percent drop from the record non-football season low of 2.37 million viewers that was set last week.

Last night’s Raw saw a strong 18.8 percent first-to-third hour drop, falling just under 1.9 million viewers, the first time under two million for Raw outside of a holiday. But the real story was how few fans were watching at the start.

This has to be troubling for WWE because the company should be on a high with the momentum from WrestleMania. However, WWE has been widely panned for a number of creative decisions in recent weeks.

The annual post-WrestleMania “Superstar Shakeup,” which saw wrestlers move between Raw and Smackdown, was thrown into confusion when many moves were suddenly reversed without any explanation. Then there was the debut of NXT tag-team champions War Raiders as the “Viking Experience” which went over about as well as the Gobbledy Gooker. That name lasted just one week as the next time the tag-team showed up on Raw they were the “Viking Raiders.”

If you watch Raw next week, they're gonna be Los Raiders de Viking.

The pressure has to be on WWE to turn things around pretty quickly with a couple major events coming up this year. First, WWE doesn’t want to debut Smackdown on Fox in network primetime this fall with the company riding a months long ratings slide. Second, with AEW’s new television deal possibly also coming this fall, WWE needs to do everything they can to make sure fans stick with them instead of being tempted to switch allegiances to a new rival promotion. Unless WWE does something big to draw fans’ attention soon, they could be looking at some serious dilemmas in both the short-term and long-term.