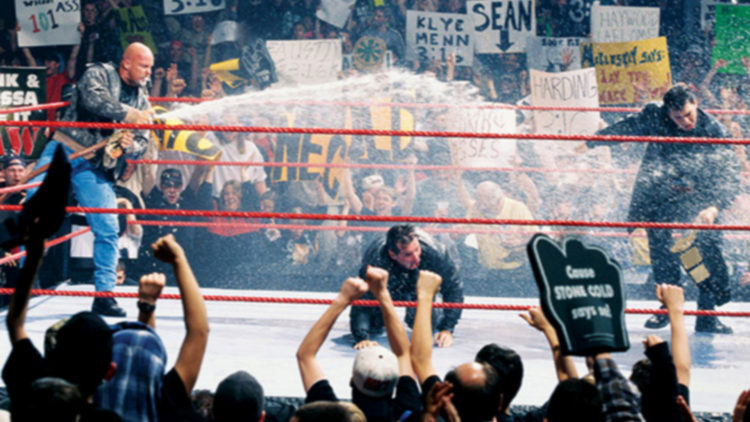 The first episode of WWE’s Monday Night Raw aired on January 11, 1993 from the Manhattan Center in New York City. This year, WWE is celebrating 25 years of Raw with a huge celebration next Monday night from the Barclays Center in Brooklyn and the Manhattan Center. That show takes place on January 22 — six days before the Royal Rumble, so it’s fair to say that will be one of the biggest Raw episodes this year.

With that anniversary, I put together a ranking of the 25 greatest moments in Raw history. Keep in mind that this is a show that just had its 1,286th episode on Monday night. It’s hard to come up with a list of Raw’s 25 greatest moments. As somebody who has been watching WWE since before Raw was in our lives, I feel like I’ve got a pretty good perspective on this. This is just my opinion and I don’t expect anybody to agree with everything but hopefully, you can remember these moments in a positive light like I do.

I’d like to begin by apologizing to “celebrity” Kevin Federline for not making the list. Yes, he did beat John Cena in a match on Raw, but it wasn’t the kind of thing we want to remember fondly. Also not on the list: Katie Vick. Google it, kids. But cover your eyes first.

I could probably write 1,000 words about every moment on here, but I’ll try to be concise where I can. Let’s get to it.

Stephanie was fairly new on WWE TV, having debuted a few months earlier. She was still in her early 20s. Test dated her and proposed, so the wedding was set to take place on Raw. Instead, Triple H (who was a top heel at the time in his first year as a main eventer) interrupted the proceedings, showed a video of a drugged-out Stephanie in the car with him and they got married.

It drew massive heat as well as some laughter from the fans that loved the devious ways of Triple H in that moment. Great story as long as you can forget the criminal act of a waiter drugging Stephanie at a party and then Hunter marrying her without her consent! That’s pro wrestling, my friends.

Who knew that this angle would lead to Triple H breaking up with Chyna because he legitimately fell in love with Stephanie and Hunter married Stephanie the real way in October 2003? The couple has three daughters together. What we don’t know is if the kids are aware of the drugging storyline. Probably not.

This was one of my favorite moments from WWE in 2017 with Chris Jericho throwing a big party for the Universal Champion Kevin Owens, who was his best friend. Owens was not thrilled about being a part of it. They did a lot of silly things with a terrible magician and a painting depicting their friendship, but then it turned into a great wrestling angle.

Owens gave Jericho the “List of KO” that led to Jericho wondering why his name was the only name on it. I thought that was brilliant. It led to Owens beating up Jericho viciously, putting an end to their friendship and setting them up for a WrestleMania match.

The great thing about the whole segment is that they were such an entertaining duo for about six months before this, so when this blow-up from Owens happened, fans were invested in it. We felt bad for Chris, but could also understand why Owens was sick of him.

Edge won the WWE Championship for the first time when he beat John Cena at New Year’s Revolution one night earlier, thanks to a Money in the Bank cash-in. To celebrate, Edge and Lita had a “Live Sex Celebration” in a bed in the ring. It was something WWE advertised all night long. There was even some cheesy music playing while they were in the bed. The segment was interrupted by Ric Flair, who went after Edge and John Cena was there too

The fact that WWE even considered doing this segment in the first place is still amazing to me. I don’t know what parents in the crowd thought about paying money to see a show where this happened and kids were sitting there watching it. I can remember after the show there was a lot of outrage about it.

Of course, that kind of thing wouldn’t happen on WWE today. Two years after this, WWE became a TV-PG product after being TV-14 for many years and they have been locked in as a PG company for the last decade.

22. The Nexus destroys everything in their path

I remember this one well because I was writing about this boring episode of Raw (2009 and 2010 were not great years for the show) when this John Cena match against CM Punk was taking place. Suddenly, the match stopped because the eight guys from NXT attacked both guys. Cena was left alone to try to fend them off, but he couldn’t do it as these eight guys (later named The Nexus) destroyed everything around ringside.

I think WWE knew they needed new talent because the roster had become stagnant, so this was a great way to debut eight young guys ready for their shot on the main roster. Too bad Daniel Bryan was fired for choking ring announcer Justin Roberts with a tie and spitting on Cena, but he was brought back two months later. If WWE booked Nexus stronger in the coming months they would have gotten over even bigger. Still, their debut was very memorable.

This isn’t the best match in Raw history, but it’s one from the show we’ll never forget. The Undertaker was the heel Undisputed Champion competing in a Ladder Match for the first time against Jeff Hardy, an exciting guy in his mid-20s who nobody thought was going to win.

There’s a moment near the end of the match where Jim Ross had one of his greatest calls ever: “Climb that ladder, kid! Make yourself famous!” I’ll never forget that moment. Watching it again recently, the crowd response for Hardy’s climb was incredible. The Undertaker ended up stopping the climb and won the match to retain the title, but they sure put on a hell of a show.

After the match was over, there was another cool moment with Undertaker tapping Jeff in the head as if to say “Good job, kid.” Undertaker raised Jeff’s hand as a sign of respect and Jeff collapsed to the mat because of the ass-kicking he took. Cool moment.

20. Jericho and Benoit beat Austin and Triple H for the Tag Team Titles

You won’t find this on any official WWE list for Benoit reasons, which is understandable. But I can’t ignore it because I believe it’s the best match in the history of Raw. Austin and Triple H were heel main eventers who were Tag Team Champions, while Jericho and Benoit were faces trying to get to the level of where the heels were. It led to a challenge for the Tag Team Titles and the match was set up for later in the night.

These teams went on to have a classic tag team wrestling match that went nearly 20 minutes, with incredible near-falls and a chaotic finish with Jericho pinning Austin after Triple H accidentally hit Benoit with a sledgehammer. The crowd reaction to the match was incredible too. It still holds up well to this day.

The match is also famous for Triple H tearing his quad muscle and still finishing the match. It was a gutsy performance by him.

19. Bret Hart and Shawn Michaels bury the hatchet with a hug

January 4, 2010 was the first time Bret was on Raw since he left the company in November 1997. The heat was real and legit. Seeing Bret and Shawn together again after Survivor Series 1997 was incredible. After 12 long years, they finally buried the hatchet.

The cool thing is what we saw in the ring was real in terms of the promos they did and the hug they shared. It was their first time talking in over 12 years. With a handshake and a hug, they officially settled their differences. The crowd went wild and I loved it too.