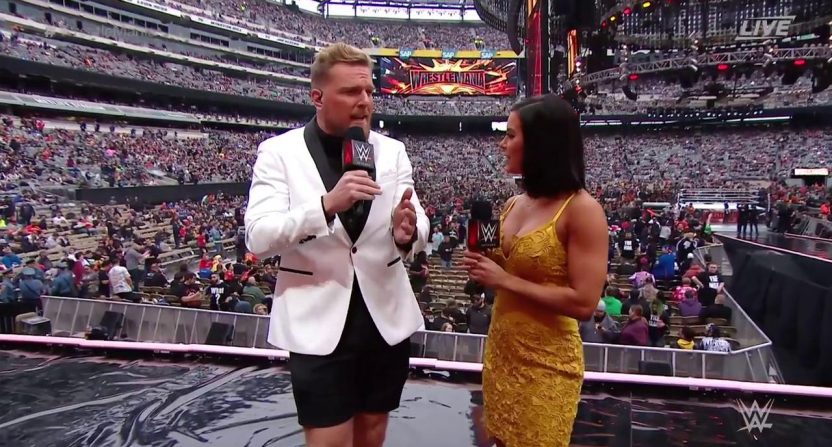 A live production can be very tense and stressful. It’s a high pressure situation for everyone involved, making sure everyone is in the right place and many people are yelling at each other in the production truck once they are live. Even before the event, people can yell at each other, which is especially the case at the biggest event of the year for a company.

WWE has been planning their WrestleMania broadcast for a months, and their staff had been in many meetings and having sleepless nights in the run-up to their big show, on top of their other weekly duties.

Last year, Pat McAfee had been on the NXT TakeOver Pre-Show during WrestleMania weekend. This year, McAfee worked the WrestleMania Pre-Show as well as the WrestleMania Watch Along (in addition to NXT). But a backstage incident almost resulted in McAfee not only not appearing on WrestleMania, but potentially quitting the company altogether.

On The Pat McAfee Show, the retired NFL punter explained that at WrestleMania, Michael Cole yelled at him minutes before the start of the Pre-Show. The issue was that McAfee was wearing shorts, but there was a difference in opinion on what Cole thought was inappropriate and what McAfee thought was, and Vince McMahon needed to smooth out the confrontation.

I had a tux … I had tuxedo shorts by the way. I was told, specifically, ‘No jorts.’ So I said, ‘You know what, I’m not going to wear jorts, not at WrestleMania.’ WrestleMania deserves a little bit more [respect]. So we took tuxedo pants, and what do we do? Made them tuxedo shorts. So the show is supposed to go live at 5:00, the kickoff show for WrestleMania on USA Network by the way. I had three little parts on the kickoff show, I’m very excited to be a part of that… So we had five rehearsals scheduled, none of them happened until about 4:15, 45 minutes before. I had been sitting in Gorilla for about two to three hours at this point, just waiting for rehearsal to happen, less than 10 feet away from Vince McMahon the entire time. Didn’t say a single word, he looked busy.”

“We finally do the rehearsal, I come back in for the rehearsal and it’s Michael Cole, on the phone, panicking, with the entire McMahon family in Gorilla. I believe there was a couple other Superstars in there, celebrities are in there, and I just start getting yelled at by Michael Cole in front of all these people … for wearing shorts. He said, ‘I told you no shorts.’ I said, ‘You told me no jorts.’ He said, ‘You look unprofessional, you look sloppy.’ He was like yelling at me in front of all these people that I’ve looked up to for so long. So I looked at Michael Cole and I said, ‘They’re tuxedo shorts, man.’ And he said ‘You look terrible.’ … This wasn’t like a rib or a gimmick, you could tell there was actual panic. I’d been wearing this outfit for 10 hours at this point so now we’re 45 minutes before the show, I feel like I could have been told earlier and also potentially not getting yelled at front of everybody else that’s there.”

“I told Michael Cole, ‘Okay’ and then walked out of Gorilla, and then I walked back to where the Watch Along was happening, and I grabbed my bag and I told the digital guy, ‘You tell Michael Cole to go fuck himself, I am leaving. I’m not getting punked and yelled at like a child in front of everybody like that. You guys think I’m some schlub. This is a second job to me. I’m very lucky to be here, very excited to be here, but I’m not gonna be yelled at like a fucking child in front of people.’ So the digital guy, who had set up a five-hour Watch Along show was like, ‘Is there any way we can not have you leave right now?’ … He said, ‘I’ll go talk to Vince McMahon.'”

“We’re 16 minutes before the kickoff show is supposed to go live on USA Network. I’m still fuming because I start thinking about it more and more … Digital guy and Michael Cole come back. Vince McMahon told them, and this is what I was told, they showed him a picture of LeBron James wearing a short suit and Vince McMahon said, ‘Yeah, I’m hip, I’ve seen it.’ And Vince said he loved it. The only issue was Vince asked where I was gonna be and they’re like ‘He’s out here on the stage. [Vince] goes, ‘Why is he on the stage? We’re not showing the stage.’ So, they actually got in trouble … That’s why if you watch the Pre-Show at all, our back is to the crowd. It wasn’t supposed to be that way. It was supposed to be our back to the big-ass Tron so we could talk about how big and massive and incredible that 4K Tron was … So they come back, Michael Cole comes back and gives me one of the realest apologies I’ve ever gotten in my entire life. He tells me, ‘It’s been a long week, we’ve got a lot going on, and I saw you, I thought this was gonna ruin it for you.’ … Because he wants me to do a lot with the WWE and he thought I was gonna ruin it for Vince seeing me in shorts … So I took the apology.”

Many fans like to crap on Michael Cole (me included at times), but I can see where Cole is coming from here. When you’ve worked with someone like Vince McMahon for over 20 years and get yelled at by him through your headset every week, you learn many of his quirks. This is a man who insists people call a hospital a “medical facility” and that wrestlers are “Superstars.” Vince is a very detail oriented person and I would agree with Cole that I wouldn’t expect a 73-year-old man, who at one point didn’t know what a burrito was even though he ate one every day for lunch, to know that dress shorts were fashionable and might flip out on McAfee if he tried to wear that on screen at WrestleMania. So in Cole’s mind, it’s better if he flips out on him instead of the guy who runs the entire company, who would probably flip out on both McAfee and Cole.

In the end, McAfee forgave Cole and knows that Cole was just trying to look out for him. And in the minutes before starting your biggest event of the year, tensions will be high. It’s usually not personal.