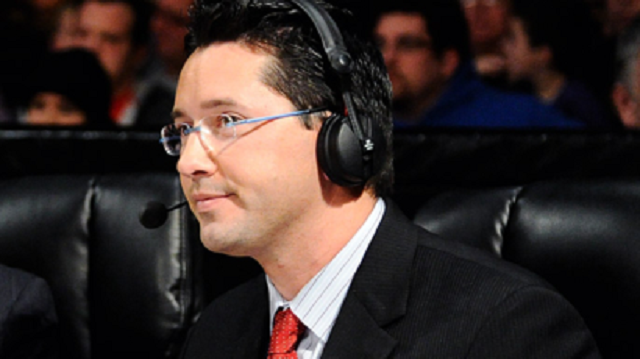 A face familiar to WWE viewers will soon become a mainstay with UFC fans.

Todd Grisham, who has covered the WWE for outlets such as ESPN, has signed on to work with the UFC. Beginning Jan. 15, Grisham will do play-by-play and studio work for the organization.

While some are attributing the news to sources, Grisham himself came out and seemingly confirmed the decision.

Just changed my twitter handle to @GrishamMMA. 2017 is going to be a great year!

Todd Grisham will be doing PBP for UFC cards on FS1 & will also be a studio host. First desk appearance is Phoenix card on 1/15, per source

Jan. 15 is when UFC Fight Night: Penn vs. Rodriguez takes place in Phoenix.

The move comes as longtime UFC play-by-play man Mike Goldberg called his final fight on Dec. 30. However, MMA Fighting reports that Grisham is not being hired on as Goldberg’s replacement.

With Goldberg’s departure, there has been plenty of speculation about who will take over for the longtime announcer. Plenty of steam has popped up surrounding Jim Rome as a possible replacement.

Grisham should slide in naturally to this new role. In the past, he’s done both play-by-play with the WWE and worked various studio roles such as SportsCenter anchor. He’s also had plenty of fun in the ring.

At this point, the move between the WWE and UFC is pretty natural. There are plenty of examples of folks going back and forth like Brock Lesnar. This is also yet another example of an ESPN personality making the move to FS1. Let’s just hope there are more chances to compare the UFC and WWE with ESPN and FS1.