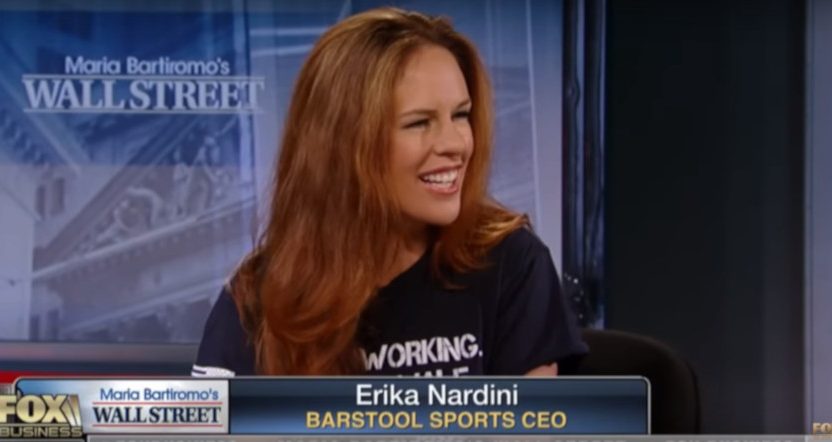 Back in October 2020, we covered Barstool Sports CEO Erika Nardini joining the WWE board of directors. It was a notable move, particularly with Nardini becoming the third female member of that then-12-person board (joining WWE chief brand officer Stephanie McMahon and former Travel Channel president Laureen Ong). The board composition has shifted a little bit since then, and the latest move sees Michelle McKenna and JoEllen Lyons Dillon joining, but Nardini (seen above in a Fox Business interview in 2018) leaving. Here’s more on that from Sean Rueter at Cageside Seats:

Later in the day on Friday, in a filing with the U.S. Security & Exchange Commission (SEC) that announced McKenna and Dillon would be joining the board, it was revealed Barstool Sports CEO Erika Nardina is resigning.

It’s specified this isn’t due to anything that’s been going on at WWE this year (and there’s been A LOT going on at WWE this year), but to allow Nardini to focus on her day job — where gambling giant, and current owner of 36% of Barstool shares, Penn Entertainment recently revealed plans to purchase the remainder of the Dave Portnoy-founded company by 2023.

And here are details from that SEC filing Rueter references:

On September 15, 2022, the Board of Directors of World Wrestling Entertainment, Inc. (the “Company”) elected JoEllen Lyons Dillon and Michelle McKenna as directors of the Company. Each of Mses. Dillon and McKenna will serve until the next annual meeting of the Company’s stockholders. There are no arrangements or understandings with any person pursuant to which either individual was elected as a director of the Company nor are there any transactions directly or indirectly involving either that would be required to be disclosed pursuant to Item 404(a) of Regulation S-K under the Securities Exchange Act of 1934. Ms. Dillon and Ms. McKenna have been determined by the Board to satisfy the independence requirements of applicable New York Stock Exchange and Securities and Exchange Commission rules.

Concurrent with the election of Mses. Dillion and McKenna, Erika Ayers Nardini has resigned from the Board. With the recent acquisition of Barstool Sports by Penn Entertainment, Ms. Ayers Nardini’s time will be focused on the next chapter of this business and partnership. Ms. Ayers Nardini’s decision to resign from the Board was not due to any dispute or disagreement with the Company, its management or any matter relating to the Company’s operations, policies or practices.

It certainly makes some sense that Nardini has more on her plate at Barstool at the moment in preparation for that full Penn acquisition. So her leaving the WWE board to focus on that makes some sense. But it is still interesting to see her leave.