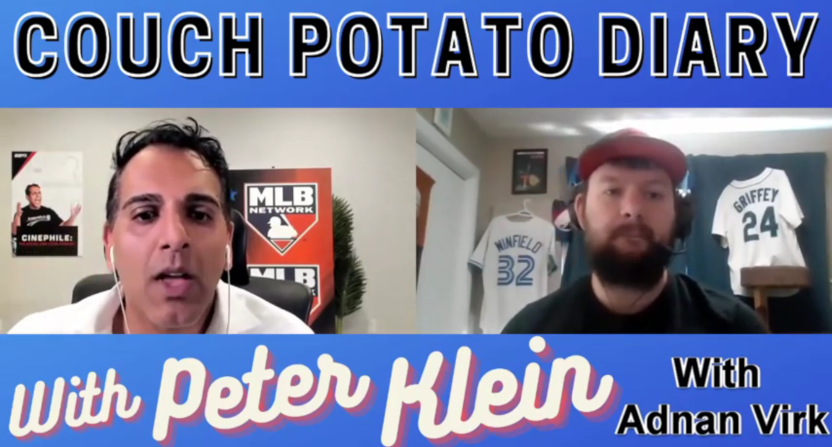 Earlier this year, Adnan Virk (seen at left above) had a short run with WWE. He joined the company as the new play-by-play voice for WWE Raw on April 12, and took criticism while showing potential, but then “mutually parted ways” with the company on May 25, with previous NXT announcer Jimmy Smith tabbed to replace him the next day. Virk has now spoken a bit more about his time with WWE on the latest episode of Couch Potato Diary with Peter Klein, which came out Wednesday. Here’s a clip of that interview that Klein (seen at right above) posted to YouTube:

AHere’s a transcription of a few key comments there from Jeremy Lambert of Fightful:

“The biggest thing for me is, I loved wrestling as a kid but I didn’t watch as much as I got older. I got offered this opportunity to audition and why not, of course I’d love to do this. They sent me a few matches to look at and I’m kind of like an actor, so you give me a few scenes and I studied really hard and I nailed those three scenes, but then you actually have to do the whole play on Broadway. That’s a much different thing than doing a scene study of three scenes. The biggest challenge for me is that, it’s hard to be really well-versed in the sport when you’re trying to catch a freight train that’s already going 100 miles an hour. I’m running alongside the train trying to catch up. It’s hard to make up for that gap in time.”

…”You don’t really need to know the history of wrestling, but as a play-by-play guy, you have to know the moves and mechanics and I think, in all honesty, I struggled to adapt to that. Ultimately, I wasn’t good enough for that position. The big thing I missed with conventional sports is we have incredible researchers. In baseball and MLB Network, NHL, and ESPN, you have people who will hand you notes and there are five notes on each person and stats. In wrestling, you don’t have that. You just go there and you’re calling Charlotte Flair and it’s up to you to do your own research and all that stuff. In hindsight, maybe if I hired Peter Klein to say, ‘give me all the notes you have,’ I maybe would have had a better idea with storylines.”

Part of this interview that’s already made headlines elsewhere, particularly at Cageside Seats, was that Virk didn’t receive formal training from WWE ahead of his first broadcast, and didn’t meet Vince McMahon until after that first broadcast. A few important parts of that:

“Vince McMahon is obviously a very demanding boss, he knows what he wants and is a super smart guy. He’s built up an enormous business, but they are hard workers.”

“…I didn’t see [Vince McMahon] my first show. Here’s the thing, they didn’t give me any training, which some people point out was a little unfair. I don’t think you hire Jason Witten for Monday Night Football and don’t give him training. I recognize that’s the way WWE does things so no excuses, that’s my fault that I wasn’t good enough. It’s not like I met with Vince before my first show. I literally was just prepping on my own, doing my best, and Michael Cole was helping out. The first time I met Vince. My first show was April 12, I didn’t meet Vince, I heard his voice in my ear at one point and he was giving direction. I met him after the second show. He summoned me in. I met him, he was very polite and very respectful and he basically gave really good feedback. He went through everything, very detailed. At the end, he said, ‘You’re doing a good job, best of luck.'”

First off, that’s quite the analogy for Virk to use. Witten was one of the most–panned broadcasters ever despite receiving significant ESPN training and having regular meetings with his colleagues for months leading up to his first broadcast in September 2018. A May 2018 media conference call had that new MNF team talking about the get-togethers they’d already had and about the further ones they had planned. But all that preparation didn’t seem to help Witten much in making the jump from not broadcasting at all (far different than Virk’s situation, where he’d been broadcasting other sports and entertainment for years) to being in the MNF booth. And yet, despite that, ESPN had still planned to use Witten on Monday Night Football and elsewhere if he hadn’t opted to go back to playing. So Witten faced perhaps a tougher task still, but got a lot of training and a lot of support, and then decided he didn’t want to continue. It might have been better for Virk to cite almost anyone else here.

The one part of the Witten scenario that is comparable to Virk is that they were both thrown in at the deep end in these respective broadcasts, though. If Witten had started as part of the sixth- or seventh- regional NFL broadcast teams for CBS or Fox, few would have seen him at first, and there would likely have been more understanding of his errors than what came with him being put on whole-country primetime Monday games. Yes, ESPN doesn’t have those particular regional game rights, but they also could have started Witten off smaller, perhaps with studio roles or with some college football. Similarly, WWE has plenty of smaller properties than RAW, including NXT. And it is interesting that after the Virk situation didn’t pan out, they went to someone in Smith who they had developed up through NXT.

Beyond that, though, the larger summary of this interview (which is clear from the context of either watching that whole clip or reading the large Fightful transcription) isn’t really Virk bashing WWE. Most of his comments there are highly complimentary, especially when it comes to broadcast colleagues, but even when it comes to McMahon. And he’s also reflective on how at least part of this not working out was on him, with lines like “No excuses, that’s my fault that I wasn’t good enough.” That doesn’t diminish that there’s a lot WWE could perhaps have done to make this work out better, from more formalized training to earlier meetings with McMahon about what was expected to giving him opportunities on unaired or lower-level events before throwing him into the RAW fire, and making it so he didn’t feel like he was trying to catch that in-motion train. But as a whole, this isn’t really Virk ripping WWE up and down.

Overall, the Virk-WWE situation seems like one that wasn’t a great fit for either party in the end. Virk certainly had potential as a WWE announcer, and he certainly came with a promising sports broadcasting background. It’s understandable why WWE brought him in. But they likely should have done so in a slower and more thoughtful way if they wanted it to actually work out. And this interview does illustrate the wide differences between covering other sports and calling wrestling, and Virk’s comments on that front are notable. And they should be kept in mind the next time WWE tries to go really outside the box for a new announcer; if they do so again, hopefully they’ll give that announcer more support and a more gradual on-boarding experience than they did with Virk.

Both of these parties are doing fine now, with Virk continuing with MLB Network and NHL Network (and with his Cinephile podcast, now on Meadowlark Media) and with WWE finding success with Smith as a RAW play-by-play voice, so there isn’t necessarily a problem for anyone. And it’s definitely appreciated to hear Virk being open and honest about his WWE time and why it didn’t work, and to hear him not just blame WWE for that. It certainly sounds like there are some things they could have done better, but it’s notable that Virk’s taking a fair bit of the responsibility as well. And the whole clip here is worth a watch for the context of Virk’s reflection on this, and how he feels about on moving on from it.