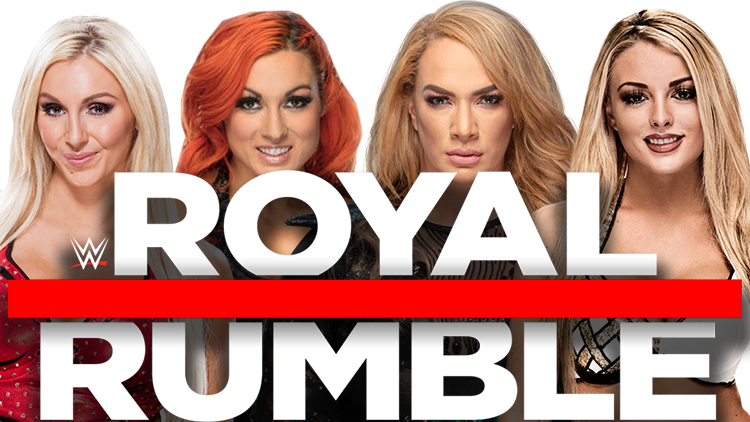 That’s 21 of the 30 names. The remaining nine names will likely include some legends from the past (just like it did last year), some NXT wrestlers, and I think a title challenger will be there too. Yes fans, I am referring to Becky Lynch. More on that later.

Ruby Riott, Sarah Logan, Liv Morgan – The Riott Squad trio should have a few moments where they work well together to eliminate a wrestler or two, but I don’t see them going very far.

Zelina Vega – The smallest woman in the match won’t last very long. She’s more of a manager than a wrestler.

Tamina – She bores me more than any woman on the roster. She might eliminate a few people to put over her power, but I hope she’s not in the match for long.Alicia Fox – She’s there to help fill out the match. I don’t see Foxy having much of a role and will likely be one of the fastest women eliminated.

Dana Brooke – It could be a chance to utilize her better than they usually do. I think she’s got a great look to her, but the lack of character hurts. I’d like to see her as a heel that is paired with another woman or a couple of women in order to accentuate her talents more.

Sonya Deville – I’m impressed by her. She might get a push later in the year. I don’t see her having a big role in this match, though.

Peyton Royce and Billie Kay – The Iiconcis are contenders to be the Women’s Tag Team Champions at Elimination Chamber. I don’t see them doing that well in this match. They might do a comedy spot that sees them getting eliminated easily.

Lana – The fans like her, she always has a chip on her shoulder, and she wants to prove herself. There’s just no consistent push for Lana, so it’s hard to predict much success for her in this match.

Nikki Cross – As a newcomer to the main roster, it makes sense to push Cross by giving her a few eliminations. I like her as a bit of a crazy character that can get over with the fans by acting different from everybody else.

Naomi – The feud with Mandy Rose has given her something meaningful for the first time in the last year. She’s popular, but she’s not featured as much as she used to be. I can see her going after Mandy to try to eliminate her and if it was me booking, I’d have Mandy eliminate her in cheap fashion.

Carmella – As #30 in the match, she’s got an advantage over the others. That doesn’t mean she’s going to go that far in the match.

Natalya – If the Rousey rivalry with Becky and Charlotte wasn’t so hot, there were rumors that WWE might have turned Natalya heel and had her face Rousey at WrestleMania. That’s not happening now although Natalya could turn heel down the road. I think she’ll be in the match for a long time because she’s a veteran that will be one of the leaders in the match.

Mickie James – A lot of what I wrote about Natalya applies to Mickie as well. As a veteran with 20 years experience, she should be in the match for a long time to help guide the girls that don’t have as much experience. I’d like to see her last a long time and have a strong showing.

Bayley – The former Raw Women’s Champion Bayley is popular with the crowd and I can see her in a spot early in the match. Put her in there as #1 or #2, keep her in the match for a long time and book her to do well. Can she win? I doubt it. I think she might be the first Women’s Tag Team Champion with Sasha Banks at Elimination Chamber next month.

Mandy Rose – This feels like a breakout show for the Smackdown blonde who is clearly in line for a push. She has improved a lot in the ring and I think a good showing here will help raise her stock. I can see Mandy making it all the way to the final four as WWE continues to build her up as a star of the future.

Ember Moon – I think out of all the newer girls that haven’t been a champion on the main roster yet, Ember is the most impressive. If I was booking the show, I would have a goal to elevate her to a championship level by the summer. Use the Royal Rumble to help get her there. An appearance in the final four would be nice to see. I’d like to see her or Mandy in the final four.

Nia Jax – It would surprise me if the biggest woman in the match, Nia Jax, is not in the final four because she’s the biggest heel out there. As soon as she gets out there, the announcers will talk about how difficult it will be to eliminate her (standard commentary for a bigger wrestler), so look for Jax to have a dominant performance. Should she win? Absolutely. She got her push last year. I don’t want to see it again. She bores me.

Trying to guess who will show up in this match is tough, but there are a few names from WWE’s past that worked last year’s Rumble, in addition to those that were on Evolution and other shows who are also likely to be there.https://www.youtube.com/watch?v=96V4Guw71HETrish Stratus – It seems likely that Trish will be in there because she looked great in the Rumble last year as well as Evolution. Plus, they could have her do some spots with Alexa Bliss, who got removed from the women’s tag team match at Evolution due to a concussion.Lita – Just like Trish, Lita did well in her return to action last year. I think she’ll be back this year as well.Alexa Bliss – The former Raw Women’s Champion has been out of action with concussion issues since October. She’s been in the ring training to get cleared and she might be cleared now, but WWE could choose to save her return for this match. I can see her doing well, but maybe WWE will have her take it easy in her return match. Why risk further injury if she’s not going over? I’d love to see her and Mickie James go after the Tag Team Titles.Nikki Bella – The Bella Twins made it to the final three last year with Asuka, so I can see them having a spot in this year’s match as well.Brie Bella – Everything I said about Nikki applies to Brie as well. The only reason she may not be part of it is because she might want to have another baby with husband Daniel Bryan. Other than that, I expect her to be a part of the Rumble.Lacey Evans – She’s a newcomer like Nikki Cross, so it makes sense to save her main roster debut for the Rumble match. If she eliminates a few people, it would give her an impressive showing in her first match.Kairi Sane – If there’s a NXT women’s wrestler that is going to be in the match, I think Sane is a good choice. She’s talented and an exciting wrestler to watch, so she could get in some of her highspots to wow the crowd.There’s one more spot that could be used for a NXT star. I think Shayna Baszler is a good choice since she’s been dominant in NXT for a while. That final spot could also be for a name from the past. That could be Michelle McCool or Torrie Wilson like we saw last year, but I’d love to see Victoria or Melina instead.The other “surprise” is Becky Lynch, who I’ll comment on below.

There are only two names left, and I would be very surprised if anybody won this match other than these two big names.The plan for WrestleMania is Ronda Rousey vs. Charlotte Flair vs. Becky Lynch, according to the Wrestling Observer a few weeks ago. The original plan was to do Charlotte vs. Ronda at the Royal Rumble, but Vince McMahon wanted to save their interaction until WrestleMania. That’s why WWE randomly went with Rousey vs. Sasha Banks at the Rumble, giving Rousey a good match at that show.In order to get to Rousey vs. Flair vs. Lynch, the obvious choice is to have one of Flair or Lynch to win the Rumble. Keep in mind that Lynch isn’t even officially in the Rumble because she’s challenging Asuka for the Smackdown Women’s Title. I think she’ll be in it.https://twitter.com/WWE/status/1087032071263059968Charlotte Flair – My pick to win. I think she’s going to be in the match for a long time with WWE wanting to put her over huge in her first Rumble. Plus, it’s Charlotte and she gets pushed as hard as any woman they have. I’m not complaining because I like her a lot, but it’s hard to argue against her being pushed so much.Becky Lynch – If Flair doesn’t win, Lynch will. If Lynch isn’t in this match then that’s because she’s the Smackdown Women’s Champion again. It’s hard to deny her popularity and she deserves to be in the biggest match in WWE women’s wrestling history.Here’s another idea that would work: Lynch wins the Smackdown Women’s Title from Asuka, then Lynch isn’t even in the Rumble match. They will have Lynch and Rousey at ringside watching the Rumble at ringside. After Charlotte wins, she announces that she wants to challenge both Lynch and Rousey for their titles at WrestleMania, so it’s a triple threat with two titles on the line. I think that would work well, but again, that’s contingent on Becky winning back her title at the Rumble.https://twitter.com/BeckyLynchWWE/status/1087065730275856384If you are mad that Becky doesn’t win this match, don’t be. There are still the Elimination Chamber and Fastlane PPVs after the Royal Rumble, so WWE has a long way to go before WrestleMania. There’s plenty of time to set up the Lynch vs. Flair vs. Rousey match at WrestleMania.Final ThoughtsHere are some quick predictions to wrap it up.Final Four: Charlotte Flair, Becky Lynch, Nia Jax, Ember MoonMost Eliminations: Charlotte FlairWrestler That Lasts The Longest: BayleyWinner: Charlotte FlairI’ll be back on Friday for some official predictions for the entire Royal Rumble pay-per-view, which takes place this Sunday, January 27 on WWE Network.