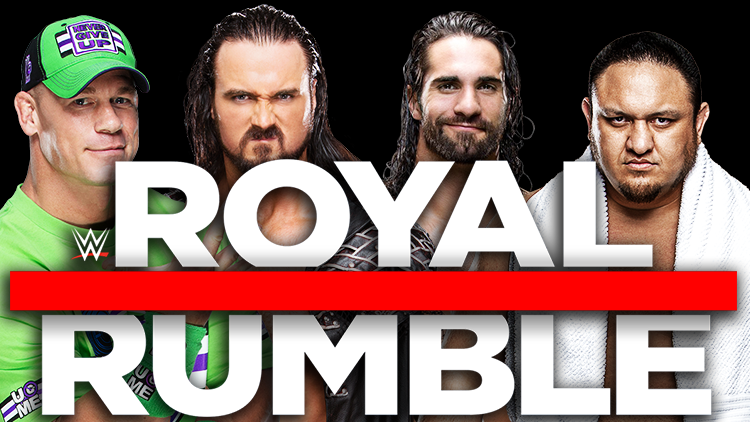 That’s 18 of the 30 names. The remaining twelve will be a mix of main roster regulars, surprises, NXT wrestlers making their debut and perhaps a guy wrestling in a match at the Royal Rumble will be there like Roman Reigns and Seth Rollins were in the match last year after having title matches.

These are the guys that are in the match, but they really have no chance of winning. If you think about every Royal Rumble in history, there are usually 25 pretenders in the match and only a handful of guys that had a chance to win.

Elias – It wouldn’t shock me if he is the first or second entrant in the Rumble match so that he can do one of his concerts. There might be an elimination or two for him. He’s not really a threat to win, but he might be put in a spot where he lasts a really long time

.R-Truth – The last entrant in the match (unless he does something stupid like give it away to somebody else or gets beat up) will not come close to winning even though he has the best advantage of them all.

Apollo Crews – He has done well on Raw of late with a few big wins. That’s a nice sign. It doesn’t mean he’s coming close to winning the Rumble, though

.Baron Corbin – As one of the top heels on Raw, he might have a good showing in the Rumble with a few eliminations. It just doesn’t feel like the right time to push him in a big way. Two years ago maybe. Not now.

Kofi Kingston, Big E and Xavier Woods – I’m a huge fan of The New Day trio and I hope the group stays together for years to come. Even though it would be cool to see one of them go far in the Rumble match (Big E perhaps?), I don’t think it’s going to happen. They’ll do well and provide some comedy in the match, but I doubt any of them will win this match.

At least we know we can look forward to a classic Kofi Kingston elimination tease spot. Those are always great.

Jeff Hardy – He’s a popular veteran that has never won the Rumble match before, but it’s unlikely that this is going to be a win for him.

Bobby Lashley – The new Intercontinental Champion has some positive momentum going his way, so I can see him faring well in this match as a bigger guy. Not a winner, though.

Mustafa Ali – He’s in a similar boat as Andrade except he’s a face (Andrade is a heel) and he’s newer on Smackdown. Expect him to hit some big moves in the match, but he’s not necessarily a threat to win.

Rey Mysterio – Same as Jeff Hardy although I would rank Rey ahead of him just because of how well he’s looking in the ring. At 44 years old, Rey is moving around very well.

Andrade – I’m glad that he is getting more of a chance to show what he can do in the ring because he’s a special talent. Perhaps in a year or two, he might be considered a favorite in this match. For now, let’s just hope he is one of those guys that lasts a long time because it will help him out as a star on the rise.

Randy Orton – He’s not listed among the group of active wrestlers in the match, but I expect him to be there. There’s no injury for him. He’s just on a break from being on TV. His rumored WrestleMania opponent is AJ Styles, so look for that feud to begin soon. If Styles gets added to the Rumble match, maybe they can start the build there.

https://www.instagram.com/p/Bsq28I6B-5I/The Rock – There are reasons to believe that The Rock might wrestle for WWE this year. He’s producing a movie with WWE about Paige’s life called “Fighting With My Family” that is being released next month. If The Rock were to appear on Raw to promote the film, it would help a lot. Another reason to think it’s possible is because WrestleMania 35 is in New Jersey, which is considered New York to some people and it’s where Rock had his last “real” match at WrestleMania 29 against John Cena. In 2016 at WrestleMania 32, Rock had a 20 second match with Erick Rowan that saw him take no bumps, so I don’t call it much of a match.One of the Rock rumors over the last year was that he would face his distant cousin Roman Reigns at WrestleMania to put Reigns over and give him the “rub” so to speak, like Undertaker putting over Reigns a few years ago. With Reigns unlikely to be involved in the show now, that plan is probably off the table.Will Rock appear at the Rumble? I would guess not, but I think a WrestleMania appearance is likely. Perhaps he’ll even have a match there too.Kenny Omega – It would be an incredible surprise to see the Canadian NJPW star in the Rumble, but I’m not going to get my hopes up. As far as we know, Kenny’s contract with NJPW is up on January 31, so he may not legally able to be in the Rumble. In addition to that, I think it’s more likely that he joins All Elite Wrestling with his best friends rather than WWE.https://www.youtube.com/watch?v=1nVkIQWYxNEBatista – I think an appearance from “The Animal” is possible after he was at Smackdown 1000 back in October. A recent report noted that there are plans for Batista to have a WrestleMania 35 match, but I don’t know if that’s a reliable source or random guessing. If I had to guess, I would say he’s not in the match, but there’s enough of a chance that I feel confident in mentioning him.Bray Wyatt – I assume the former WWE Champion has been held off TV for months because they want to bring him back for the Rumble. There’s no injury that I know of, so it would make sense to bring him back here and establish him as a top guy.Aleister Black – If I had to pick one name from NXT to debut in the Rumble it would be him. I don’t see him being Tommaso Ciampa for the NXT Title one night before the Rumble at NXT Takeover Phoenix, so that will mean that Black is a main roster regular. He’ll do well in this match too because I think WWE knows that Smackdown needs popular faces like him. The reason I say Smackdown is because his new wife Zelina Vega is on there.Roman Reigns – I don’t expect the former Universal Champion to be back after announcing he had leukemia in October. With that said, I don’t know any more about his situation than the next person. Chris Jericho recently stated that he thinks Roman will be back in the ring someday, but nobody really knows when that will be. What matters is that Roman gets better from his battle with leukemia and if he’s able to wrestle again then that’s a bonus to WWE.The Undertaker – The 53-year-old legend would be the oldest guy in the match if he’s a part of it. I’m leaning towards yes to an Undertaker appearance since he was moving well at the Super Show-Down and Crown Jewel events in the fall. That doesn’t mean I think he has a chance to win the match, but I think his presence will help if he’s a part of it.

Here are some quick predictions to wrap it up.

Wrestler That Lasts The Longest: Elias

Winner: Seth Rollins. I’ll be back with a breakdown of the women’s Royal Rumble match on Monday. It’s a match that will likely come down to the two biggest favorites to win: Becky Lynch and Charlotte Flair. I’ll let you know my pick in that column and then next Friday I’ll have predictions for the entire Royal Rumble pay-per-view, which takes place on Sunday, January 27 on WWE Network.