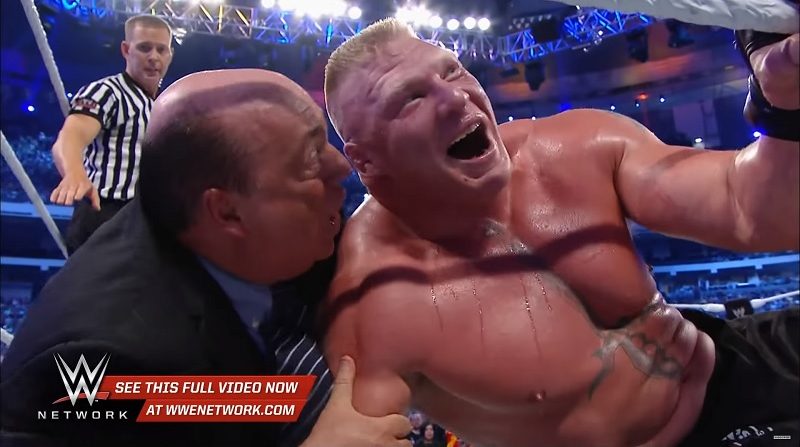 As sporting events have been indefinitely postponed, there’s a lot of time to fill in their schedules. Sports networks suddenly are trying to come up with innovative ways to entertain viewers, and everything is on the table.ESPN has brought back a special March version of “The Ocho” on ESPN2 this Sunday, and will also be airing encores of three WrestleMania events on the next three Sundays in the leadup to WrestleMania 36 on Sunday, April 5th.Here are the three events that will be aired by ESPN.

Inevitably, some matches will be cut from these broadcasts, given that the programming block is only four hours long (and most WrestleMania events in recent years have crept over the five hour mark) and commercials will be spliced in.Here’s hoping these ten matches make the cut (which, given the quality and importance of them, they should), because you absolutely should watch them.Two quick honorable mentions: Batista vs. Triple H and Baron Corbin vs. Kurt Angle from WrestleMania 35. These weren’t the greatest matches, but they were the retirement matches for Batista and Kurt Angle, so if you appreciate either of these wrestlers, they’re worth your time.10) Erick Rowan vs. The Rock (WrestleMania 32)This wasn’t much of a match (because it only lasted six seconds), but The Rock hasn’t competed in the ring since this match took place. Dwayne Johnson is currently the highest earning actor in Hollywood and the movie industry doesn’t really want to see their cash cow get injured in a wrestling match. While there’s a chance The Rock will have one more match, this might be the last time The Rock competes at WrestleMania, and that level of history is worth watching.https://www.youtube.com/watch?v=4tpunvqSyOk9) AJ Styles vs. Chris Jericho (WrestleMania 32)A solid, albeit unmemorable, match featuring two guys who always have a great match. This is on the list not because it was great, but because I’m curious to see if WWE is petty enough to nudge ESPN not to show this match since Chris Jericho now stars for competitor AEW. If this match is televised, it’s a good one to check out. And if it’s not, it says a lot about WWE’s priorities.8) Brock Lesnar vs. Seth Rollins (WrestleMania 35)This match was the surprise opener at last year’s WrestleMania. Brock Lesnar’s matches are typically three minute squashes where the opponent gets in no offense, but this flipped the script. Rollins took advantage of some low blows and hit his finisher several times, and the “Beastslayer” slayed the beast and became WWE Universal Champion.7) Shane McMahon vs. The Undertaker (WrestleMania 32)Shane McMahon matches have us preconditioned that he’s going to do something insane at some point in the match. Instead of telling a great story, fans pretty much tune out and wait until that moment. At WrestleMania 32, McMahon jumped off the top of the Hell in a Cell and onto the broadcast table at rinside. It’s not as memorable as Mick Foley getting thrown off the top of the Cell in 1998, but it was still pretty dangerous and memorable.https://www.youtube.com/watch?v=bWI2l4ZbdA46) Becky Lynch vs. Charlotte Flair vs. Sasha Banks (WrestleMania 32)Important because it kicked off the “Women’s Evolution,” this match matched up the future of wrestling. WWE finally started taking women’s wrestling seriously and without this match, there may not have been a women’s main event at last year’s WrestleMania.5) Brock Lesnar vs. The Undertaker (WrestleMania 30)This was the match that ended the streak and set The Undertaker’s WrestleMania record at 21-1. It’s still scrutinized due to the decision to make Lesnar the man to break the streak, but the two did what they could to make the match entertaining after a concussion The Undertaker suffered early on. Regardless of how you feel about the decision, the result was legitimately shocking and was decades in the making.https://www.youtube.com/watch?v=TK_7GUKY3ic4) Becky Lynch vs. Charlotte Flair vs. Ronda Rousey (WrestleMania 35)Three years after the triple threat match mentioned earlier, we’re here. WWE has many issues, but putting this match in the main event slot was one thing that WWE did right (well, other than the finish). Putting two of the best, male or female, wrestlers in the business in the ring with “The Baddest Woman on the Planet” Ronda Rousey  was a recipe for brilliance. This match gave us the reality that women could main event the biggest show of the year and nobody would mind.3) Daniel Bryan vs. Triple H (WrestleMania 30)2) Batista vs. Daniel Bryan vs. Randy Orton (WrestleMania 30)It took them a while to get to this point, but this was a rare time WWE actually listened to fan reaction. Daniel Bryan fandom reached a fever pitch back in 2014, and fans were begging for him to win the Royal Rumble. He ended up not even being in the match, and then Batista won, which inadvertently turned him heel in the process. Like we saw with Bret Hart at WrestleMania 10, Bryan won both the opening match and the main event to become World Heavyweight Champion. WWE took the scenic route to get to the destination fans wanted, and took on some unintended collateral damage in the process, but they got there in the end.1) Daniel Bryan vs. Kofi Kingston (WrestleMania 35)It’s not a coincidence that Daniel Bryan is a part of the three best matches of these three events. But while Bryan was great in this match, it was really all about Kofi Kingston. Unlike what happened to Bryan, WWE got behind Kingston when he caught fire among the fans, who wanted him pushed to the top. WWE toyed with the fans by screwing him over at times, but that just made the inevitable payoff and KofiMania even better.https://www.youtube.com/watch?v=6XLlLu0psYE