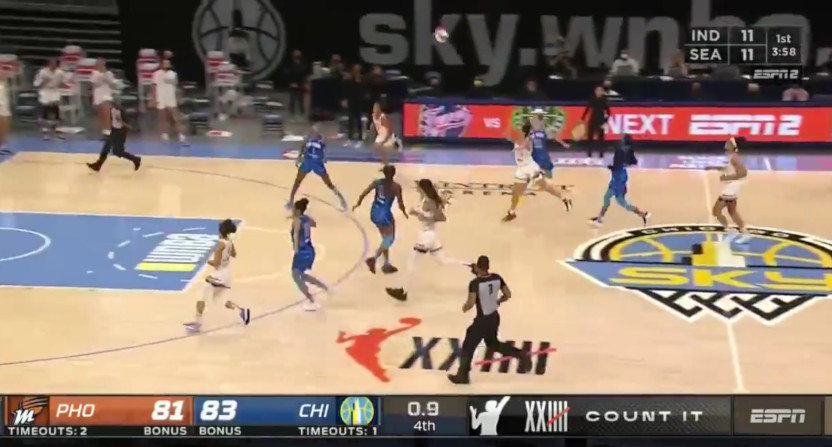 One of the more remarkable basketball finishes in a while came in the Phoenix Mercury-Chicago Sky WNBA game Tuesday, one of 25 WNBA games ESPN’s affiliated networks are televising this year as part of the league’s 25th anniversary celebrations. This one was televised on the main ESPN network, and it had quite the final moments, with Mercury guard Kia Nurse picking up a defensive rebound inside the final 10 seconds with her team trailing 83-81, dribbling down court herself with no timeout called, letting fly from around halfway between the center court line and the three-point line, and draining that shot for the win with 0.1 seconds left on the clock. And that led to quite a call on ESPN from Ryan Ruocco:

"OH MY GOODNESS. WHAT A FINISH IN CHICAGO"

“Rebound, Phoenix! They’re off and running! They don’t take a timeout! Nurse, hits! KIA NURSE! HITS AT THE BUZZER! AND PHOENIX WINS! OH MY GOODNESS, WHAT A FINISH IN CHICAGO!” That’s a great call of a remarkable moment from Ruocco, and one that required a lot of confidence from Nurse. As he noted on the call, the more usual approach here would have been a timeout (the Mercury had two left) and a drawn-up play. And if this shot hadn’t fallen, there would have been plenty of questions about why they didn’t go that way. But Nurse did a great job in transition and made this work, and it got the Mercury the win.

And this shot was just part of Nurse’s dominance on the night. She recorded 18 points (including five three-pointers), eight rebounds, and three assists overall. And the Mercury are now 4-3 on the season, and this was a good way for them to get there.