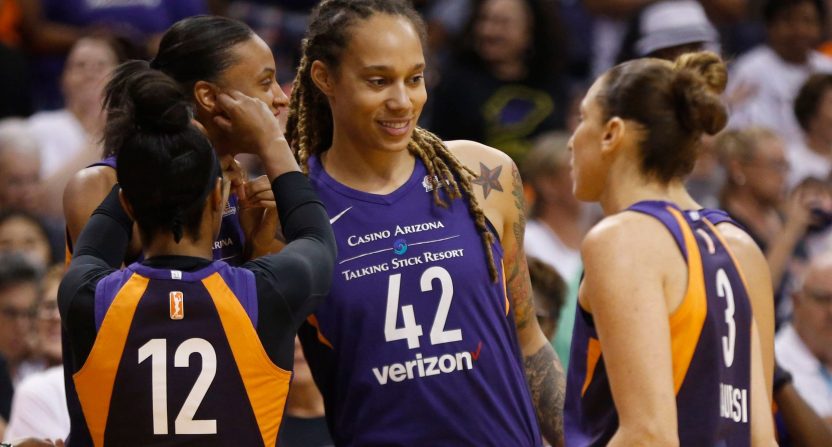 “How do you talk about a story that’s worth talking about while the people involved in the story desperately don’t want you to talk about it?”

In the midst of the ongoing war between Russia and Ukraine, it can be hard to know where the situation involving WNBA star Brittney Griner fits in and what it means as part of the larger story. And the complicated nature of the relationship between the United State and Russia in the midst of that is making it hard for Americans to understand exactly what they should be doing about it.

Monday’s episode of the ESPN Daily podcast featured a conversation between host Pablo Torre and ESPN investigative reporter T.J. Quinn about just how delicate the situation is and how those who most want Griner safe are also the ones asking for caution before you start talking about it.

Brittney Griner, detained in Russia, faces up to 20 years in prison. But those closest to her do NOT want to turn a terrifying story into a political cause.@TJQuinnESPN explains a misunderstood paradox — and the strategy underneath

Griner was detained at a Moscow airport last month for allegedly carrying vape cartridges that Russian officials claimed had hashish oil, a marijuana concentrate, which is currently illegal within the country. The arrest wasn’t made public until March, which led to an outcry from many on social media and in the American media about the lack of coverage.

As Quinn explained on the podcast, the slow leak of information about the WNBA All-Star’s situation was deliberate on both the Russian and American sides, with the latter having a fear that her arrest could become a political bargaining chip.

“They didn’t inform the public until Russia actually released the information,” said Quinn. “And then the [New York] Times went with it and suddenly the world said, ‘Wait a second, Brittany Griner has been in custody all this time and nobody knew about it?’ It seemed kind of impossible, but this was all deliberate. From the time Brittany Griner’s people learned that she was in custody, they’re learning from the State Department and any experts they can get a hold of exactly the situation that Brittany is in.

“They knew that there are two tracks this case could go down. One is the criminal justice system there, which deals harshly with drugs and could end up with her in prison. That is the better of the two paths for her, believe it or not. Because the other path is that it becomes political. And if it becomes political, then her life is in the hands of one man and his government, Vladimir Putin. They have, nominally, rule of law in Russia, but not when Putin decides they don’t, and it’s the rule of one man.

I spoke to people close to Brittney Griner over the past few days. Here’s the needle they have to thread: reassure a skeptical public that everything is being done to help her, but not inflame the situation in a way that might endanger her. I discussed with @PabloTorre https://t.co/hhCuoEbvuH

“If he decided ‘I want to make an example of her,’ because she is this powerful, cultural symbol. She is this 6-foot-9 Black gay American woman. And this is not a country, you know, say what you want about how well they pay female athletes, it is not a country where the government is particularly progressive when it comes to gender and sexuality.

“And the people around Brittney Griner and the U.S. government know that if you make too big a deal of it here, you not only risk bringing attention to it, but you add value to her as an asset. That means Putin and the people around him would recognize, wait a minute, if they’re making this huge deal, we could really get something out of this.”

So if there’s a need for conversation around her arrest but not so much that it makes it clear publicly that the United States is desperate to see her freed, how do you do that? Extremely carefully, says Quinn, which is hard when even American journalists don’t understand the procedures and protocols in play here.

“The needle they’re trying to thread is pretty incredible,” said Quinn. “You have the public, and largely the press in the United States, that is ignorant of what the procedures are, what Russia’s history and culture is when it comes to this, and look, fair enough. But people make these assumptions based on the fact that, well, I don’t hear the White House raising hell about this. I don’t hear the WNBA or the union, why aren’t they saying anything? And then it becomes this cultural story in the U.S. about how we look at women’s sports.

“I’ve talked to people around Brittney Griner. They would love to have that conversation about the inequities between men’s and women’s sports in this country. They just don’t want to have it right now, because as valid as that might be, it’s a distraction and a potential danger to her situation. And so, very well-meaning people are out there hashtagging #FreeBrittney and saying ‘what if this were Tom Brady?, what if this were LeBron?’ Yeah, it would be different, unquestionably. But their whole mission right now is just to get her out of there as quickly and safely as they can.”

A big part of the problem in Quinn’s eyes is that this is a situation that requires Americans to trust the institutions in charge. Anyone who has been in this country for the last decade can tell you that’s a very big ask these days.

“Part of that whole threading the needle act that they’ve got to do is try to convince well-intentioned people out there, journalists and public alike, that they need to trust the institutions who are working here,” said Quinn. “And in the year 2022, that ain’t easy. Trust the White House? Trust the WNBA? Trust the NBA? We are not in a place in our culture where people are prepared to do that no matter who’s telling us.

There are easy answers at the moment when it comes to Griner’s situation, let alone the larger Russian-Ukraine conflict that is raging around it. But according to Quinn, it sounds like the people who need to be aware of how to handle this are doing that, even if it doesn’t feel like it or seem like it.

The thinking is if there’s too much heat in this country it makes her a more valuable asset to the Russian govt. So far her case has been handled in the criminal justice system. But if Putin or his government decide to use her for political purposes, then she becomes a hostage.

“That’s the paradox,” said Quinn. “How do you spread the word that you gotta be careful about spreading the word?”

You can listen to the whole conversation, which includes more details around how these kinds of situations are often handled as well as why Griner and other WNBA stars are drawn to Russia in the first place, here.