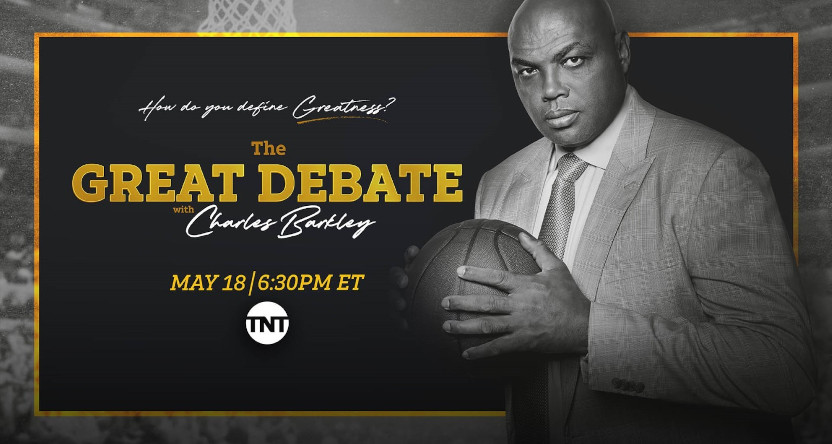 One of the more unusual sports documentary projects in some time comes from Turner Sports’ just-announced The Great Debate with Charles Barkley, “a documentary film that will reframe the classic debate about basketball’s greatest of all time by redefining the very concept of ‘greatness.‘” The film, a collaboration between Turner Sports and Barkley’s Round Mound Media (really, the perfect name for his production company) that’s launched around this year’s 75th anniversary NBA season, will premiere Wednesday, May 18 at 6:30 p.m. on TNT, ahead of the network’s NBA playoff coverage that night. Here’s more from a release on what to expect from it:

The film will feature Barkley telling the stories of the players that inspired him and explaining what a debate that covers 75 years of NBA history is truly about. This film is Barkley’s love letter to his NBA heroes, past and present.

Directed by multiple Emmy Award-winner Scott Boggins, the film consists of six profiles, each centered on one of Barkley’s “greatest” players by decade, woven together by a roundtable hosted by Barkley with esteemed guests Spike Lee, Jackie MacMullan, and Renee Montgomery. The players’ contributions will be measured by their off-the-court accomplishments alongside their on-court heroics.

“I am so proud of this film,” says Barkley. “We’ve taken a very different approach by expanding the conversation about the GOAT to include the massive impact my top choices have made on American culture, civil rights, the business world and even our identity as a country. And it’s really entertaining too.”

This is certainly an interesting approach, and there’s a good team behind it. Boggins is known for his work both inside and outside of sports; his sports credits include producing work on the 2000 Sydney Olympics for NBC and on the 24/7 documentary series for HBO Sports, and he’s won 12 Sports Emmys, but he’s most recently been the showrunner of Showtime’s politics show The Circus. Boggins is a producer on the project as well as its director.

Other producers include Barkley’s long-time agent and Round Mound Media partner Marc Perman, Marina Grasic and Jai Khanna of Oakhurst Entertainment, Randy Becker of Level 4 Films, Craig Jenest of Five Films, and Robert E. Morgan of Talaria Media. And the roundtable here is notable too, with Lee, MacMullan, and Montgomery all bringing credibility and different perspectives. It’s also significant that this will go beyond just on-court impacts; those debates have happened a whole lot in the NBA, but the wider context of players’ impacts on “American culture, civil rights, the business world and even our identity as a country” should make this stand out.

This is also perhaps notable as part of a wider trend of Turner working on documentary projects with its studio talent. They did that with Candace Parker’s Title IX documentary 37 Words earlier this year, and they did the four-part The Inside Story on Inside The NBA last year. We’ll see if there’s more to come on that front.

The Great Debate with Charles Barkley will premiere on TNT at 6:30 p.m. ET on May 18.