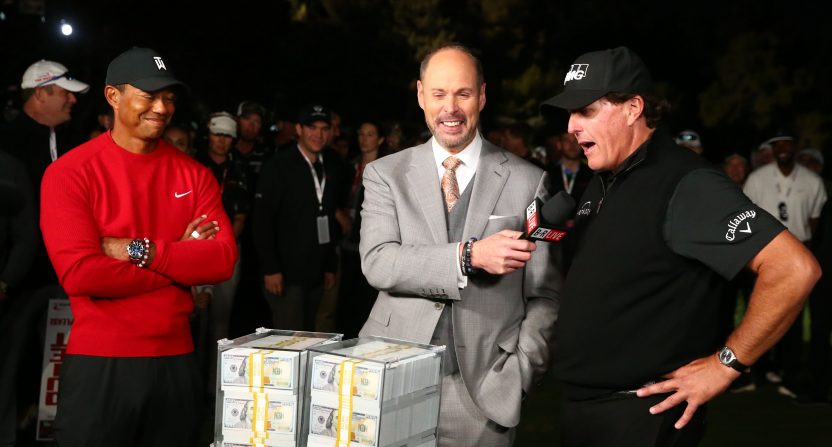 “The Match” was a $19.99 pay-per-view event through the B/R Live website/app and cable and satellite providers… but Bleacher Report eventually allowed users to watch the event for free due to a technical glitch during the match.

On Friday night, Comcast offered a refund to its customers that paid for the event, and released a statement asking Turner/Bleacher Report to do the same.

“Comcast will proactively issue a $19.99 credit to any Xfinity TV customer who purchased ‘The Match’ pay-per-view event. We hope Turner and Bleacher Report will do the same given that the event was made available by them for free on The Bleacher Report website.”

And after additional cable/satellite providers did the same, Turner Sports decided on Saturday night to also refund customers that paid for “The Match.”

JUST IN: Bleacher Report issuing refunds to anyone who paid $19.99 for Tiger-Phil event after they made the decision to turn “The Match” on for free. Joins carriers Comcast & Spectrum, who will issue credit to customers.

An issue with the interface for B/R Live began before Phil Mickelson and Tiger Woods teed off on Friday. Turner Sports said in a statement to USA TODAY Sports that it “decided to take down the paywall to ensure that fans who already purchased the event would not miss any action.”

That decision, however, angered those who paid $20 for an event that many watched for free. Mickelson won the winner-take-all, $9 million event in 22 holes.

“This did not impact the live streaming of the competition and fans were treated to an event that was both engaging and memorable,” the Turner Sports statement read. “Unfortunately, the pre-match technical issue did occur, and we will offer fans who purchased the event on B/R Live a refund.”

So, that whole situation didn’t go smoothly, but at least the viewers that paid the $19.99 were refunded in the end.