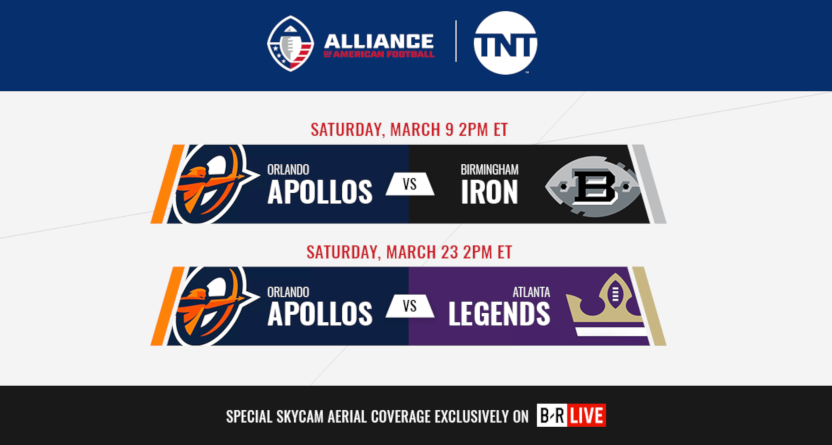 The Alliance of American Football is continuing to find some TV success, as Turner Sports announced Tuesday that they’ve picked up two further AAF games for TNT. Their deal was initially just for one regular-season and one playoff game there on that network each year, with other games on B/R Live, but they’ve now added two further regular-season games to TNT. And those games will also feature a Skycam feed on B/R Live.

TNT’s coverage of the inaugural season for The Alliance of American Football has expanded and will include the addition of two games to its upcoming programing lineup, both featuring the currently undefeated Orlando Apollos. TNT will televise Orlando’s game against the Birmingham Iron on Saturday, March 9, at 2 p.m. ET, along with their game facing the Atlanta Legends on Saturday, March 23, at 2 p.m.

In addition to the TNT presentation, the B/R Live premium live sports streaming service, will provide a live companion experience exclusively using the unique “Skycam” view of the action. The alternative perspective of the live action will allow audiences to see top-down and 360-degree panoramic views of both games.

AAF games to date have posted pretty consistently good ratings, so this makes some sense. Week 1’s CBS games obviously drew the highest numbers so far, pulling in 2.9 million viewers on average, but the numbers have been reasonably strong even after the novelty of the first game and the move away from broadcast television. Week 2 saw a million viewers for TNT’s game and 424,000 and 425,000 for the games on the lower-distribution NFL Network, and Week 3 saw a further rise for NFL Network, with its games going to 491,000 and 525,000 even amidst stories questioning the AAF’s finances. The NFLN numbers fell a bit this week to 409,000 and 450,000 viewers, but those numbers are still very good for less prominent sports programming in February. (Numbers for AAF games on CBSSN and B/R Live are not available.) Let’s look at some sports programming this week that posted lower numbers than that Sunday NFLN AAF game (data via ShowBuzz Daily, presented alphabetically):

Of course, that doesn’t mean that the AAF is stronger programming than all of those sports; everything listed above except bowling and football had other broadcasts this week that beat the AAF. But when AAF games on NFLN are outperforming some NHL, EPL and MLS content on higher-distribution channels like NBCSN and ESPN, that’s not bad, and it certainly suggests there’s value here for broadcasters. And that’s why TNT’s picking up some more games.

The AAF’s long-term staying power can still be debated, especially as we don’t know how it’s doing financially from these broadcast deals (a lot of this appears to be about exposure for the league rather than financial rewards). Still, the TV audience it’s averaging is quite a reasonable number for a startup sports property, especially during a time like February and early March when there isn’t a lot else on. We’ll see how these TNT games do, and we’ll see if the AAF audience holds up for the rest of the year, but the league’s TV showing so far has been pretty solid.