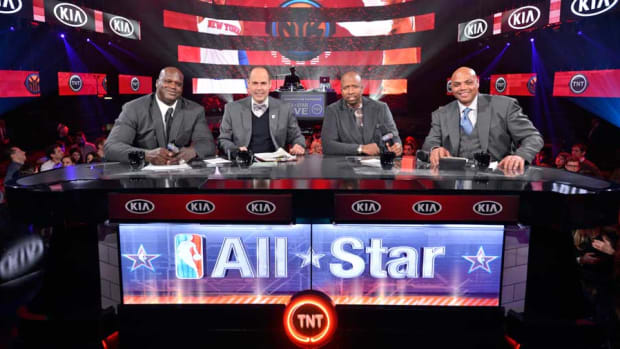 Turner Sports is going to be doing over 24 hours of coverage of NBA All-Star Weekend in Chicago from Thursday through Sunday, and there are a couple of particularly notable elements with that. To start with, there’s what they announced Thursday; the fourth quarter of Sunday’s All-Star Game, which will be untimed and see teams competing to reach a target score, will be aired ad-free. Here’s more on that from their release:

For the first time, TNT’s exclusive presentation of the 69th edition of the NBA All-Star Game 2020 presented by Kia will include commercial-free coverage coinciding with the NBA’s newly formatted, untimed fourth quarter on Sunday, Feb. 16.

On Sunday, Team Giannis and Team LeBron will compete to win each of the first three quarters, all of which will start with the score of 0-0 and will be 12 minutes long.  At the beginning of the fourth quarter, the game clock will be turned off and a Final Target Score will be set.

That ad-free approach is certainly novel for a high-profile NBA game, but it makes some sense. With that quarter being untimed, there perhaps aren’t as obvious breaks for TV timeouts, and this will let the on-court action flow smoothly. And an ad-free broadcast should get even more people to tune in for the fourth or keep watching through it. There is the challenge of now not having ad breaks in what’s probably going to be the most-watched part of the game. However, Turner Sports executive vice president and chief revenue officer Jon Diament told Broadcasting+Cable’s Jon Lafayette earlier this week that commercial slots for this weekend sold out faster than ever despite higher prices and declining league-wide ratings, so Turner’s still doing just fine for this overall weekend. And they’re only going ad-free for one quarter of one game, and it seems like a decent time to experiment with this.

On another front, Turner is also doing some unique and different approaches Saturday. They’re starting by televising an episode of The Steam Room, their new podcast with Ernie Johnson and Charles Barkley (plus guests) at 4 p.m. Eastern, then rolling into TNT NBA Tip-Off coverage at 5 p.m and the State Farm All-Star Saturday Night (a variety of skills contests, including the MTN DEW Three-Point Contest and the Taco Bell Skills Challenge) at 8 p.m. And they’re following that up with a comedy roast. Here’s more on that from a release earlier this week:

Saturday’s coverage will culminate with the first-ever Inside the NBA All-Star Roast at approximately 10:30 p.m., during which Johnson, Barkley, [Kenny] Smith and [Shaquille] O’Neal will be roasted by comedians and stars Dwyane Wade, Tiffany Haddish, Jay Pharoah, Jeff Ross and Gary Payton and others.

Well, that’s definitely a different approach for a sports broadcast. But Inside The NBA has often leaned into comedy, especially with their Barkley–O’Neal feud, so this is a more natural fit for them than it would be for most studio shows. And this could wind up being pretty funny. We’ll see how it plays out.