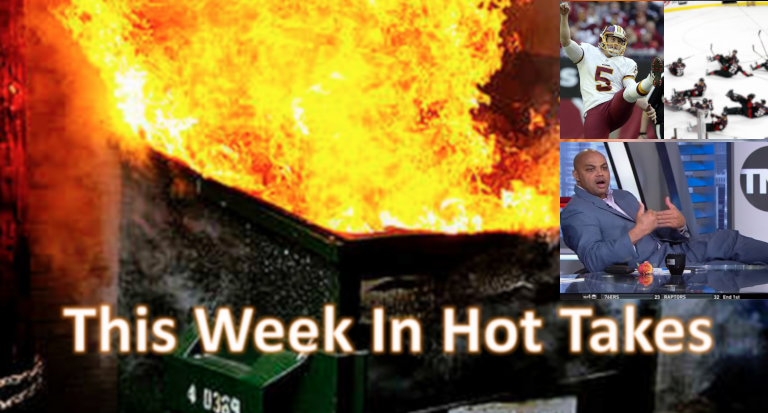 Welcome to another edition of This Week In Hot Takes. This time around, we’re breaking down the hottest takes from March 8-14.

5. Mike Francesa says the Beckham trade is the “best thing that could happen to Giants”: The New York Giants’ trade of Odell Beckham Jr. to the Cleveland Browns was met with much rejoicing from Browns fans (so much so that someone called 911 on their celebrating neighbor) and much lamentation from many New York fans and media. Even the sports books dropped the Giants’ Super Bowl odds (which already weren’t great) considerably. But, of course, WFAN host and noted Beckham critic Mike Francesa had the opposite take, claiming that the trade was the “best thing that could happen to Giants”:

We can argue about compensation but Beckham trade is best thing that could happen to Giants. He just never got it.

Francesa went on to ridicule the Browns:

Mike Francesa mocks #Browns fans for their high expectations in 2019 after acquiring Odell Beckham. Trust me, this video clip is the best thing that's happened to Cleveland in a very long time. pic.twitter.com/jCOVNaqyXK

That also includes Francesa saying “When [Jeremy] Shockey was here, the Giants did nothing, when Beckham was here, the Giants did nothing,” conveniently ignoring that the Giants made the playoffs four times from 2002-07 while Shockey played there (winning the Super Bowl after the 2007 season, albeit after Shockey suffered a season-ending injury, but he was still a key contributor to that team), that they made the playoffs in 2016 with Beckham, and that a lot of their issues aren’t necessarily about Beckham. But Francesa was thrilled that the Giants signed…the older and less-productive Golden Tate.

Keep on keeping on, Mike.

4. Phil Mushnick bashes Antonio Brown and Odell Beckham Jr.: Speaking of cranky old New York media members, let’s check in with Phil Mushnick of The New York Post. In a column mostly complaining about Urban Meyer and James Dolan, Mushnick decided he needed to throw some shots at Beckham and Brown as well:

Then there are the advertising and marketing executives who continue to degrade sports by rewarding the most conspicuously attention-starved, only-about-me selfish. The current harvest includes Odell Beckham Jr., an instant TV endorsement darling, and Antonio Brown, another TV endorsement — and police — magnet.

Both, while extremely talented, were driven to steadily undermine their teams, coaches and clubs’ patrons while bestowed steady, second-income commercial reward. To the spoilers go the spoils.

For several seasons, NBC’s “Sunday Night Football” opened with video of Beckham and Brown showboating, as if that’s worthy of our extra attention and admiration. Those at the wheel had no idea they were being gamed by those eager to wreck the game? Or they just didn’t care?

It’s not the first time Mushnick has ranted about celebrations, or about Brown (whose end-zone twerking he once called “a vulgar groin-thrusting TD dance that mimed copulation” and “a repugnant act”), or about Beckham. But it’s lame that he’s still trotting out these lines.

3. Don Cherry is still mad about the Hurricanes’ celebrations, saying  “Players hate this stuff”: Continuing on the cranky old man theme, 85-year-old Sportsnet analyst Don Cherry went after the Carolina Hurricanes’ celebrations a few weeks ago, calling them a “bunch of jerks.” That phrase was so good the Hurricanes turned it into a t-shirt. But weeks later, Cherry is still mad at them, as seen from this Coach’s Corner segment on Saturday’s Hockey Night In Canada:

“The players hate this here, by the way, they hate this stuff.”

Adding: “They don’t know hockey and they think it’s lovely.”

It’s certainly more lovely than Cherry’s particular brand of commentary, which hasn’t been relevant in decades, if ever.

2. Stephen A. Smith insists on continuing NFL drug testing, also thinks Redskins’ punter Tress Way started at quarterback: Stephen A. has a long tradition of complaining about marijuana, so it’s not exactly surprising that he was making a First Take argument that NFL players shouldn’t use it even in states where it’s legal, and that the league should continue its current testing procedures:

Should the NFL continue to test for marijuana?@stephenasmith says yes. pic.twitter.com/c37IW47pXs

“I don’t want to watch an athlete high!” Yeah, that’s exactly how NFL players are using marijuana, not for pain relief but to be high during games. But speaking of poor performance, Smith made yet another NFL blunder this week, this time claiming that Redskins’ punter Tress Way started a game at quarterback for them in 2018.

Maybe it’s not the players who should “Stay off the weed!”

1. Charles Barkley claims he could beat Candace Parker in basketball, or any woman in anything: “A woman can’t beat me in a sport”: Speaking of outrageous claims, let’s go to Turner Sports’ Charles Barkley on The Dan Patrick Show:

Barkley: A woman can’t beat me in a sport.

Patrick: In any sport?

Patrick: Candace Parker would beat you one on one, Chuck.

Barkley: Dan, let’s raise some money for charity. I love working with Candace. She’s very talented, but a woman can’t beat me in a sport! Stop it! Candace Parker cannot beat me in basketball.

It would be great to see the 32-year-old Parker take down the 56-year-old Barkley in a modern-day Battle of the Sexes, and there’s no doubt in this corner that she’d win. But that’s not even the most outrageous claim here, as Barkley was once good at basketball, unlike most sports. “In any sport?” Have we forgotten how bad of a golfer Barkley is, and how many LPGA players could beat him? Or how terrible his baseball-throwing form is? And while he loves watching hockey, here’s thinking most if not all professional women’s hockey players could skate rings around him. And it goes on from there. Toronto Star columnist Bruce Arthur had the best response to this:

I feel like if we do this right that a woman can beat Charles Barkley in literally every sport https://t.co/FjB4baxy5R