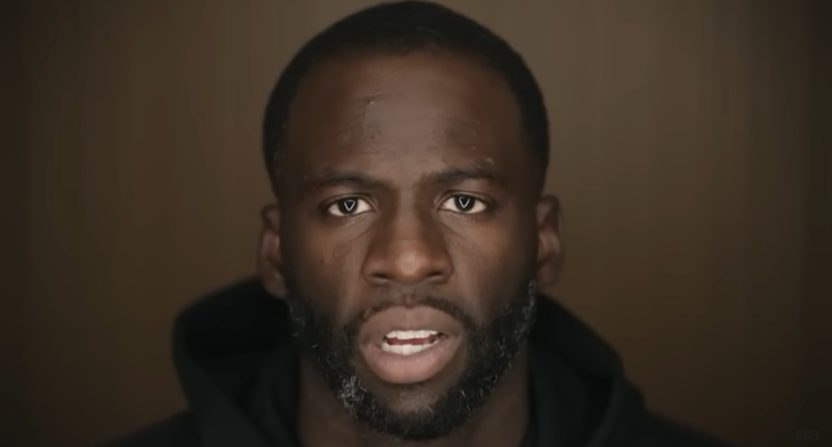 Golden State Warriors’ forward Draymond Green has drawn a lot of attention for his “new media” comments about athletes presenting their own narratives. Many of those “new media” efforts are done in partnership with established media companies and/or personalities, though, such as Green’s podcast with Colin Cowherd‘s The Volume. And in addition to that podcast, Green is also a contributor to Warner Bros. Discovery Sports (formerly Turner)’s NBA coverage, signing on with them on a regular basis in January following years of (sometimes controversial) guest appearances.

Green‘s WBD deal got particular attention on TNT’s opening night NBA coverage Tuesday. There, they debuted an “all-access” The Countdown series on Green (in partnership with his 23 Green company and with Peyton Manning‘s Omaha Productions). And the premiere of that series covered Green’s reactions to media coverage of his punch of Jordan Poole in practice and his eventual fine from the team. Here’s how WBD announced that Tuesday:

The premiere will feature Draymond Green's journey throughout the preseason, including Green’s reaction to his practice altercation and return to the Warriors. pic.twitter.com/ZO7clVQpnS

And here’s part of the actual segment that aired:

Both the existence of The Countdown and Green’s specific remarks here have drawn a lot of comment. Here’s some of that:

Draymond Green: “i dont care what people think about me”

the countdown: the draymond green story

Zach Lowe said on his pod a lot of Warriors officials strongly urged Dray not to pod about the incident so this probably not going over well https://t.co/BZ60PNCbD8

They made a Last Dance for a dude slugging his own teammate in the face??? https://t.co/p6dYaXHuFQ

in all of the excitement of the NBA being back i can’t believe i almost missed draymond making his own 30 for 30 about punching his teammate 1 week ago ??? https://t.co/JrP99d6zSX

What’s wild about this Doc is Draymond himself spoke about how much the incident has embarrassed Poole and Poole’s family. And is now making content around it. https://t.co/16y8xV62Cs

As Zach Harper noted, Green’s comments here don’t really align with what he previously said at his press conference about watching the video 15 times, where he said “Watching the video, this looks awful, this looks even worse than I thought it was.”

And Green’s wardrobe ahead of the Warriors’ game against the Lakers was also an interesting choice, with many comparing him to Batman villain The Riddler:

Draymond simultaneously looks like the Riddler and The Temptations pic.twitter.com/268BspQFL3

Draymond with enough Riddler energy to power the sun https://t.co/VuWFaVK9Vf

Draymond auditioning to be the Riddler pic.twitter.com/r39Yphc52N

Dude punched his teammate, made a doc about it and showed up to get his ring dressed as the riddler

It seems unlikely this series fully came together in the aftermath of Green’s punch of Poole. Green’s January Turner deal mentioned “Green making appearances on TNT’s Inside the NBA, among additional content initiatives throughout the Turner Sports and Bleacher Report portfolio,” and it seems likely this The Countdown was envisioned as part of that. We don’t know that for sure, though, given that this series doesn’t appear to have been officially announced ahead of Tuesday.

But The Countdown fits with Green’s wider attempts to take his message to the public more directly (albeit through established media companies). And given WBD’s previous spotlighting of Green on their NBA coverage, they certainly would have had interest in an all-access series on him before the Poole punch. So it seems reasonable to presume that this was at least in the works before the Poole incident. But the decision to start this now and start it with an episode including commentary on Green’s punch of Poole is one that can be debated.

There were at least four potential options for WBD in the wake of Green’s punch of Poole (who, for his part, has been very quiet about this, mostly just expressing hope to move on). One would have been to cut ties with Green entirely. Another would have been to put the debut of this series off for at least a week, if not indefinitely (which would have been easier than with expected series, considering how it wasn’t officially announced). A third would have been to go ahead with this, but not discuss the Poole punch, similarly to how Green’s only podcast since the incident and his appearance on The Shop have gone (those were recorded ahead of the punch, though, whereas this wouldn’t have had that excuse). The fourth was what they chose, leaning into this and presenting Green’s commentary on it.

All of those options have pros and cons. Handling this the way WBD did maximizes interest in it, but draws criticism (as shown above) for capitalizing on Green’s punch of a teammate. But the “Green is profiting from this” argument is only somewhat correct; if the series was in fact commissioned before the punch, Green is profiting from this being part of his overall WBD deal, not from them specifically paying for content on the punch. And the decision to include that content and start this series now is more on WBD/Omaha than him.

The other options have their own pitfalls as well. A first The Countdown episode Tuesday without anything on the punch would have been bashed for ducking the controversy. Holding off on the series for at least a week or more might have let the punch situation cool  off a little, and drawn less criticism for not covering the punch, but it also would have drawn less attention and engagement. And while WBD parting ways with Green entirely in the wake of this punch would have been praised by some, it would likely have been bashed by others, including Green.(It’s also unclear what the financial impact there would be; it would depend on the specifics of any termination clauses in that contract.) So there wasn’t an easy route for WBD to take. But the one they chose may have maximized engagement, but it also maximized criticism.