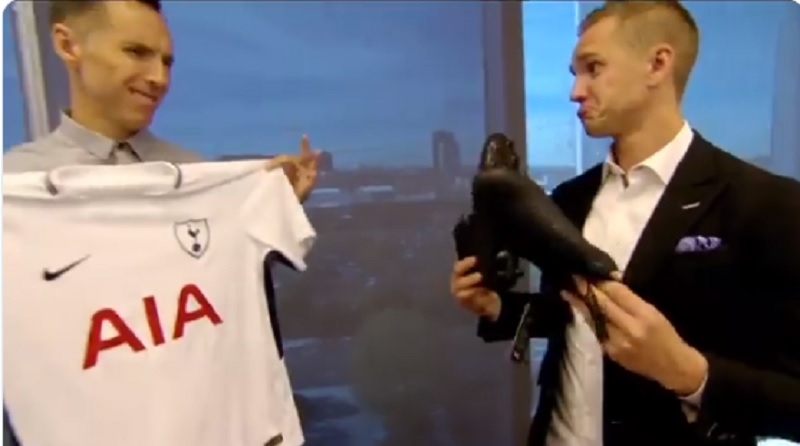 This week, Turner will attempt to replicate its Players Only coverage it uses for weekly games on NBATV to its Champions League soccer coverage on TNT. Turner is sending Stu Holden and Steve Nash to Spain to call Barcelona-Tottenham from Camp Nou on Tuesday and then provide pitchside analysis during pre and postgame coverage of Valencia-Manchester United on Wednesday.

The two biggest questions going into this experimental final week of the Champions League group stage are whether Nash is ready to call the first live soccer match in his life and if the American soccer audience is ready for Players Only style coverage for an important match for Spurs, who likely need a result Tuesday to advance to the knockout stage.

Awful Announcing spoke with Holden about how he and his good friend Nash will try to navigate this new, unique,  pressure-packed assignment.

“I don’t know how this is gonna go,” Holden told Awful Announcing. “I think it’s gonna go well. I know how prepared we are, how we’re approaching this.”

For the Barca-Spurs match, Holden and Nash did a couple of practice runs of games from a monitor in Los Angeles and Holden said it was fun to see Nash grow as an analyst as those rehearsals played out, though there’s still a lot of room for growth.

“I think he underestimated perhaps just kind of the amount of work it would take when you’re doing this week in and week out,” Holden said.

On Tuesday, Nash sent Holden a Barcelona clip from a video scouting service called Wyscout, indicating to Holden that Nash is doing the necessary film work to be prepared as a game analyst.

“I was like what are you doing? You’re trying to show me up now.”

It’s been fun for Holden to teach Nash his methodology for preparing for games, watching film and taking notes. It was cool for Holden to see how prepared Nash wants to be for this, he said.

Preparation for his first ever game broadcast is obviously critical for Nash, but Holden said a huge challenge will be for Nash to distill his real-time analysis into 15-30 second sound bytes live on the air.

“That was my biggest challenge when I first started,” Holden said. “How do you say less and still say more? How can you be more concise in your delivery and still give really good points?”

When you’re doing a pregame show, you have a run-through beforehand and you know what your talking points will be. That changes in real time during a game.

“You can never replicate what it’s gonna be like in a real game, just like in basketball or soccer, practice is never like the games,” Holden said. “You can’t recreate those situations and those scenarios and that feeling.”

One thing Nash learned in those practice games is that the closer the ball gets to the goal, the more you need to be focused on the actual game action as opposed to the conversational analysis the pair will provide during this broadcast,

“That’s the biggest challenge for him, recognizing which pockets and when is the best time [to provide analysis and conversation],” Holden said.

What Holden thinks is different about this format is how they’re not trying to be a traditional broadcast, where Holden would default to play-by-play and ask Nash a bunch of questions. Holden is certainly not going to try to be like Martin Tyler, Ian Darke, Arlo White, or Fox colleague John Strong.

“Because this is the first game he’s ever called,” Holden said, “I see it more as I’m leading the conversation between me and Steve and I’m still analyzing the game and interjecting my analysis and my opinions continually throughout the broadcast.”

Don’t expect this match to be called in a perfectly polished or a completely clean manner. There are going to be times where they’re stepping over each other or they miss a tackle that leads to a corner kick.

“Who cares?” Holden asked. “You know, I think as long as we’re letting it flow and run in a nice way, it’s meant to be different and sound different.”

For Nash, things are going to be totally different at Camp Nou in front of 100,000 loud, chanting fans.

“You’re up a mile in the press box and there’s screaming and yelling and the game is fast,” Holden said.

They’ve talked about using hand signals “if he’s making a point and he doesn’t see or feel the ball is going to a certain area. We’ve talked about me just stepping in and stopping that and taking over.”

Holden maintains that as long as people come into this broadcast with open ears, “and are willing to be open to something that’s a little bit different from what they’re used to hearing,” then they’ll find their Players Only version of a soccer broadcast to be different in a positive way.

So Nash and Holden are prepared as they can be for the former’s first game broadcast, and for Nash’s first time doing pitchside analysis for Valencia-Man U. Holden said Nash is preparing for that by looking for a good trench coat.

“It’s not gonna perfect on the first one,” Holden said of bringing Players Only to soccer. “We’re aware of it. Turner’s aware of it, but I think we feel good enough going into this that we feel confident it’s gonna be a success.”