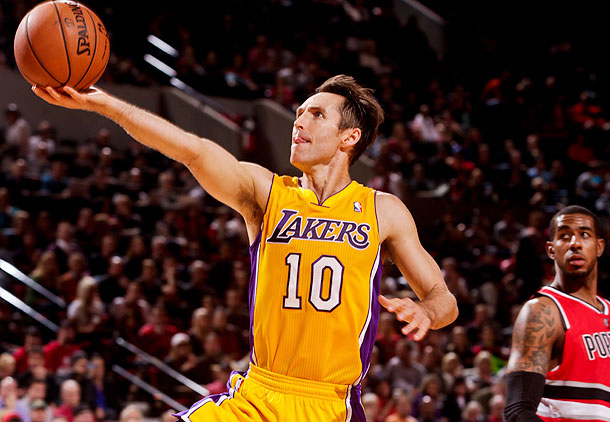 On Wednesday, the New York Post’s Andrew Marchand reported that former NBA MVP Steve Nash will join Turner Sports as a studio analyst. Given that Nash is an all-time great player and by all accounts a really smart dude, the hiring comes as no surprise… until you see what Nash’s role will be.

Per Marchand, Nash will work not on Turner’s NBA coverage, but rather on its Champions League soccer coverage. Turner will air the Champions League on TBS, TNT and TruTV during the 2018-19 season, after prying the rights from Fox last year.

Obviously, hiring Nash for soccer insight is a highly unusual move. Sure, the former point guard is a longtime soccer fan, with ownership stakes in Vancouver Whitecaps of MLS and Mallorca of La Liga, not to mention a father and brother who played professionally. But unlike most people who work as studio analysts for soccer broadcasts, he never actually played the sport at a high level and presumably lacks some of the subtle expertise he would be able to flex in an NBA role.

Turner’s decision to use Nash in its Champions League coverage might remind some fans of Fox’s ill-fated attempt to turn Gus Johnson into soccer play-by-play man, but Turner seems to be differentiating between the two examples. Via the Post:

A source stressed that the potential Nash hire is not a Gus Johnson-Fox situation at Turner, where Turner would be planning on trying to reinvent soccer broadcast with novices. In 2011, Fox hired Johnson to call the 2018 World Cup. The plan seemed doomed from the start because Johnson had no real soccer play-by-play experience, and the two sides ended the experiment years ago. Soccer enthusiasts were not fans of Johnson calling the premiere matches in the sport or, really, any games.

While Nash is an outside-the-box candidate, he is a bit different than Johnson, as he has expressed his passion for soccer for years. The rest of Turner’s studio and game analysts are expected to be more traditional choices.

The Post reports that Turner has no plan to use Nash on its basketball coverage, but that seems a bit hard to believe. Unless something in Nash’s contract with the Golden State Warriors (for whom he is a consultant) bars him from discussing basketball on TV, the two-time MVP would seem like a useful analyst during the NBA regular season and playoffs. Maybe he won’t secure a seat on Inside the NBA anytime soon, but he could pop in for a segment here and there.

Or, you know, maybe he’ll be too busy studying Spartak Moscow’s back-up goalie to have time to talk basketball.