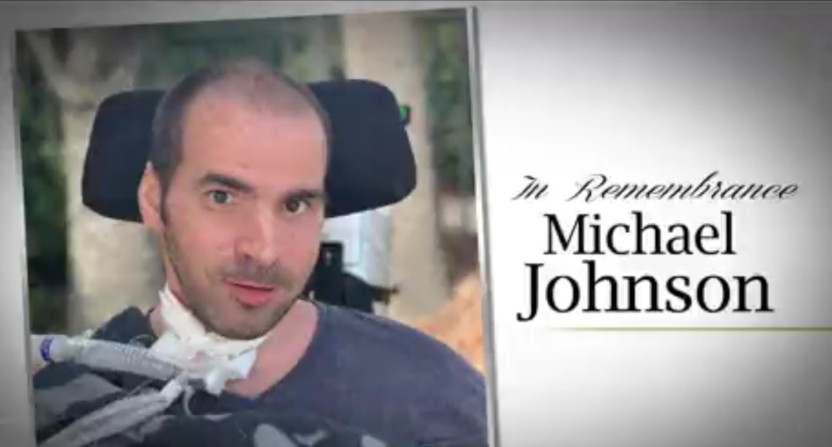 On Friday, famed Turner Sports broadcaster Ernie Johnson’s son Michael passed away at 33. Johnson described Michael’s life as “miraculous” in an Instagram post, as many people with muscular dystrophy don’t live past their early teenage years. But Michael’s passing has still hit many hard. That led to tributes to Michael, and to Ernie, from both ESPN and Fox Saturday, notable considering that Johnson works for one of their competitors. And as for Turner, the NBA on TNT pre-game show Tuesday opened up with Adam Lefkoe introducing a tribute to Michael:

The opening introduction from Adam Lefkoe, setting up a 2019 video of Ernie talking about Michael. pic.twitter.com/0O6OX64sQ8

“Tonight, we’ll bring you a doubleheader of NBA action, but not yet. You see, here at Turner, it’s family first, and our family’s hearts are heavy. Late last week, Ernie Johnson’s son Michael, who battled Duchenne muscular dystrophy his entire life, passed away at 33. Michael’s unwavering strength, his constant joy, inspired everyone who had the chance to share time with him.”

Lefkoe then introduced a clip of Johnson talking about Michael in the NBA on TNT studios to people at Turner two years ago. Here’s that clip:

"There’s value in everybody."

Back in 2019, Ernie shared a powerful message about his son Michael.

Michael Johnson passed away at age 33 on Friday, but his impact will never be forgotten. pic.twitter.com/MAdSsFrhQ4

After that, Johnson’s usual host chair was vacant, and analysts Shaquille O’Neal, Kenny Smith, and Charles Barkley offered their own tributes to Michael:

Shaq, Kenny and Charles remember the life and impact of Michael Johnson. pic.twitter.com/c9e1IRJcFo

A few notable quotes in there:

Shaquille O’Neal (1:25): “To see a great man like this hurt, it just makes all of us hurt. Ernie, you know I love you, you know we love you. Condolences to you and your family. And whatever you need from us, you know I’m going to be there for the rest of my life. We go back since 1989, and thank you for always being nice to me, thank you for allowing me to meet your family and hang out with your family. I know you’re hurting; take your time coming back, brother.”

Kenny Smith (3:25): “To see him, when Ernie would bring him, he and his wife would come around. With Michael, we always talk about lighting up a room, but it’s a gravitational pull. Some people have a gravitational pull no matter who they are and how they are. Michael had a gravitational pull that you would move towards him in that respect. For those who don’t know, Ernie is usually the person that we lean on. So Ernie, this is the first time you need to lean on us.”

Charles Barkley (4:00): “Shaq, I agree, obviously when I got the call over the weekend, I was heartbroken for Michael, but I was really heartbroken for Ernie and Cheryl Ann. Because watching that story just made me appreciate them more. I’ve heard that story, I’ve seen that story, I knew that story, but for them to adopt a kid they knew had special needs, to change his life forever. And as she said in that phone call, ‘I would spend the rest of my life wondering what happened to that kid.'”

“But she doesn’t have to worry or wonder, because they gave Michael a wonderful, wonderful life. They loved that kid. I would not personally have the courage to do that, to adopt a kid and do all the things for him that they did for Michael, but my admiration for them grows. They gave him a wonderful, wonderful life. I know they’re hurting right now, I know Eric and Maggie are probably hurting, their other kids. But man, that story just makes me appreciate Ernie and Cheryl Ann, for her to make that sacrifice. And that just shows you what kind of guy we’re working with.”

They then threw to the game broadcast, where Kevin Harlan and Reggie Miller opened their own tributes to Michael. Here’s a clip of that:

Harlan says “Of course, all of us at Turner, and the entire NBA family, saddened by the passing of Michael Johnson, who became an inspiration, I think, for so many people not just within our small Turner community, but in the entire NBA. When they knew the story and heard Ernie speak about his son, it brought tears to your eyes, but a very inspirational message every time that he talked about his son.” And Miller says “Obviously a sad day for the Johnson family, our hearts and prayers go out to them.”

Miller and Harlan followed that with more thoughts:

More from Kevin and Reggie: pic.twitter.com/wN233Y7sL2

Miller says “You and I always talk about guardian angels, and Michael is looking down on us, and hugging us. Once again, our thoughts and prayers to the Johnson family.” And Harlan says “Ernie always spoke so eloquently about Michael, the hearts he filled and the inspiration he was. And we know that Cheryl and Ernie are hurting right now, and we’re right there with you. Ernie would always say ‘You always think about other people in this world and how you can affect them,’ and Michael affected so many people in such a wonderful way, as Ernie has throughout his career.”

My brothers.
No words.
Just a sea of gratitude from Cheryl Ann and me.
And Michael.
Love You Too?

Our thoughts go out to the Johnson family, and to everyone at Turner, at this time.