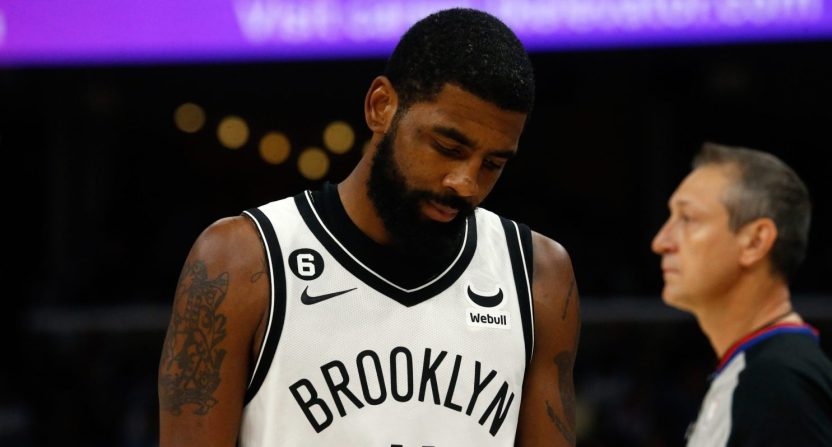 For a league that promotes social activism, the NBA has been repulsively quiet on Kyrie Irving’s promotion of a film filled with antisemitic disinformation.

Instead of strongly condemning, suspending or reprimanding Irving, the Brooklyn Nets and the NBA have essentially empowered the All-Star point guard by allowing him to amplify an antisemitic film and dangerous conspiracy theorist Alex Jones without consequence.

Previously, the NBA held Donald Sterling, Robert Sarver and Meyers Leonard accountable for insulting communities. Not only has Irving (seen above in an Oct. 24 game) evaded retribution, but the Nets are now protecting him from the media following Saturday night’s scrap with ESPN reporter Nick Friedell.

But as the NBA, its commissioner and players fear addressing this controversy and continue to hope it just magically goes away, TNT, a TV partner paying the league billions of dollars in rights fees, took on the issue head-on Tuesday night.

Earlier during the NFL season, Amazon‘s Prime Video was justly criticized for avoiding any real conversation surrounding concussions as the platform covered a game that saw Miami Dolphins quarterback Tua Tagovailoa carted off the field. And the week prior, Amazon also ignored any meaningful discussion about Deshaun Watson’s sexual misconduct cases while broadcasting a Cleveland Browns game.

TNT could have similarly chosen to protect the NBA by dancing around the topic of Kyrie Irving Tuesday night. Instead, not only did they broach the controversial topic during their coverage of the Nets and the Chicago Bulls, they passionately condemned Irving and the entire NBA as they discussed the issue pre-game, in-game and post-game.

During TNT’s studio show Inside the NBA, Charles Barkley and Shaquille O’Neal labeled Irving an “idiot,” strongly denouncing his actions while also blasting commissioner Adam Silver for not taking disciplinary action. And the conversation did not stop once the game started, with sideline reporter Jared Greenberg providing a detailed recount of the Irving controversy, which prompted the following statement from TNT analyst and Basketball Hall-of-Famer Reggie Miller.

“In years past, this league has been great because the players have led the way and they have strong voices,” Miller said on the broadcast. “When Donald Sterling stepped in it, when Robert Sarver just recently stepped in it, our voices from our leaders in the basketball community and our players were vocally strong in some type of discipline being handed down — or be gone.

“The players have dropped the ball on this case when it’s been one of their own. It’s been crickets,” Miller continued. “And it’s disappointing, because this league has been built on the shoulders of the players being advocates. Right is right and wrong is wrong. And if you’re gonna call out owners, and rightfully so, then you’ve got to call out players as well. You can’t go silent in terms of this for Kyrie Irving. I want to hear the players and their strong opinions as well, just the same way we heard about Robert Sarver and Donald Sterling.”

The NBA, NBA Players Association, Brooklyn Nets and team owner Joe Tsai each released statements on the issue, but none of them mentioned Irving’s name. Releasing a statement or sending a tweet to vaguely condemn hate speech is not enough, especially considering how the NBA has dealt with offensive actions in the past. Credit TNT for not ignoring specifics and offering honest dialogue while demanding the league and its players to similarly hold Irving accountable.