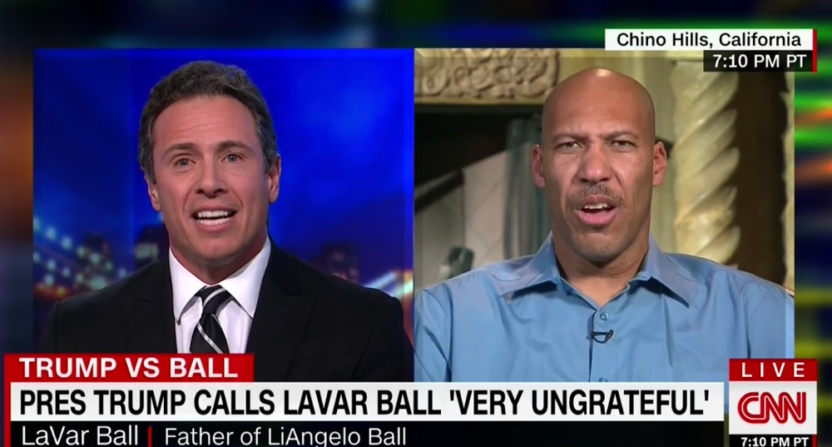 If it’s possible for the LaVar Ball news cycle to hit peak insanity, Monday might have done it.

Following the Twitter feud between Ball and President Donald Trump over whether Ball was properly grateful for Trump’s efforts in getting LaVar’s son and UCLA player LiAngelo Ball out of a Chinese prison following a shoplifting charge (try explaining that sentence to someone from 20 years ago!), CNN’s Chris Cuomo invited Ball on for a 22-minute remote interview Monday night. And it went fully and completely off the rails, from four minutes debating the societal function of the words “Thank you” to several minutes yelling over each other in a way First Take could only dream of to Ball bringing back his “Stay in your lane” phrase (now a $60 t-shirt), asking Cuomo if his name was “Chromo? Like Google Chrome?”, saying “You wound up tight!”, and cutting an incredible wrestling promo to close this out, saying “Tell Donald Trump to have a great Thanksgiving, cause Big Baller is!”

The full segment is at the bottom, but here are some of the, er, I guess, highlights:

Here are some, uh, highlights of Chris Cuomo's long CNN interview with LaVar Ball. "Tell Donald Trump to have a great Thanksgiving!" "Cuomo? Chromo? Like Google, the Google Chrome?" "Stay in your lane!" "You wound up tight!" and a long discussion of thank yous. pic.twitter.com/d0nfViHKMr

Here’s the “Let’s just stay in our lane” part:

"If you help, you shouldn't have to say anything," says LaVar Ball, father of UCLA basketball player LiAngelo Ball, adding, "Let him do his political affairs and let me handle my son, and let's just stay in our lane" https://t.co/CzyFZ2YTO1 pic.twitter.com/1XiXEg6Pl4

“Did he help the boys get out?” Ball said. ” I don’t know. If I was going to thank anybody, I would probably thank (Chinese) President Xi (Jinping).”

“I would say thank you if he would have put him on his plane and took him home,” Ball said. “Then, I would have said, ‘Thank you, Mr. Trump, for taking our boys out of China and bringing them to the U.S.’ There’s a lot of room on that plane.”

Oh, and the thank you discussion really needs to be seen to be believed. And this was only part of it:

LaVar Ball and Chris Cuomo went a full four minutes talking about who was going to thank who first.
This is just first 90 seconds. pic.twitter.com/268Uge7sJF

The full segment can be seen here, but we take no responsibility for anyone’s brain turning to goo by watching it:

In the end, though, this would seem to be yet another win for Ball. He made sense at certain points here, especially when wondering why the president is obsessed with tweeting about him, and even though much of this was a trainwreck, it got yet more people talking about him. That seems to be working out for him just fine. And while “LaVar Ball appears on CNN to debate if he should say thank you to President Trump” may be the quintessential 2017 story, and one driving many of the rest of us mad, it’s not one that’s working out poorly for Ball.