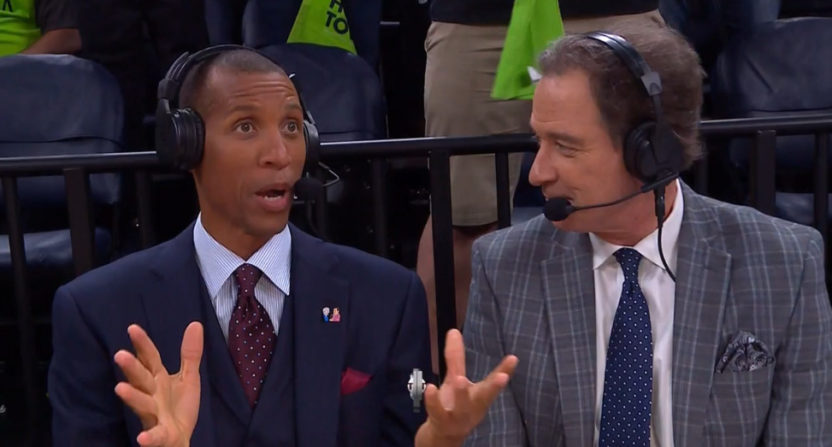 The NBA on TNT broadcast of the Houston Rockets-Minnesota Timberwolves playoff game Monday slipped into the Twilight Zone, with announcer Kevin Harlan making it sound like he was calling everyone “Reggie” (particularly an issue with Derrick Rose, who has an older brother named Reggie who’s often represented him in public comments and gets paid as a consultant on his shoe deal) by trying to get analyst Reggie Miller to comment on them, Miller coming up with his own misnomer by calling former Wolves guard Ricky Rubio “Marco” (no, Ricky is not the U.S. senator from Florida), and the first minute-plus of the second half proceeding with no play-by-play and the Inside The NBA cast talking to Miller during the action.

But let’s start with Harlan and the debate he created with repeated instances of this around Rose, causing Twitter to argue if he was saying “Reggie Rose” or “Reggie, Rose”:

Who the hell is Reggie Rose? Y'all got my dad calling this game?

Is he calling him reggie rose or have I heard that wrong now 3 times. I know he's broadcasting with reggie but he's not referring to Miller when he says the name.

Here are some clips, if you want to investigate for yourself:

From this perspective, the second clip sounds the most like “Reggie, Rose” and the third sounds the most like “Reggie Rose,” with the first one being somewhat ambiguous. But it’s all hard to tell, and that goes to show one of the challenges in broadcasting; people hear what they hear, not necessarily what you mean. It seems hard to imagine that Harlan doesn’t know Derrick Rose’s name, but these repeated calls certainly have some questioning that.

Fortunately, there aren’t too many NBA players with prominent brothers named Reggie, or this would likely come up a lot more. However, Harlan also did this with some other players, such as “Reggie Paul”:

Okay, that makes it clearer that he’s just trying to get Miller to comment, but the way he says it definitely sounds like “Reggie Paul.” And he’s been doing it with other players too:

Tell me he did not just say Reggie Teague, what is going on

“KEVIN HARLAN, WITH NO REGARD FOR HUMAN NAMES!” Last we checked, the entire league had not been turned into players named Reggie. And Miller got in on the misnomer fun, calling former Wolves’ guard Ricky Rubio (who now plays for the Jazz) “Marco Rubio” when discussing the March fight he got into with Jeff Teague:

And this wasn’t the only weirdness going on during this one: at the start of the second half, the Inside The NBA cast just kept talking from their studio with Miller while play started, with Harlan finally talking almost a minute and a half into the third quarter:

Who knows what was going on there, whether that was a decision to have the studio guys offer some extra analysis or whether there was a delay while Harlan got back to his seat. Whatever it was, it was another strange moment on what’s been a strange night on the NBA on TNT.