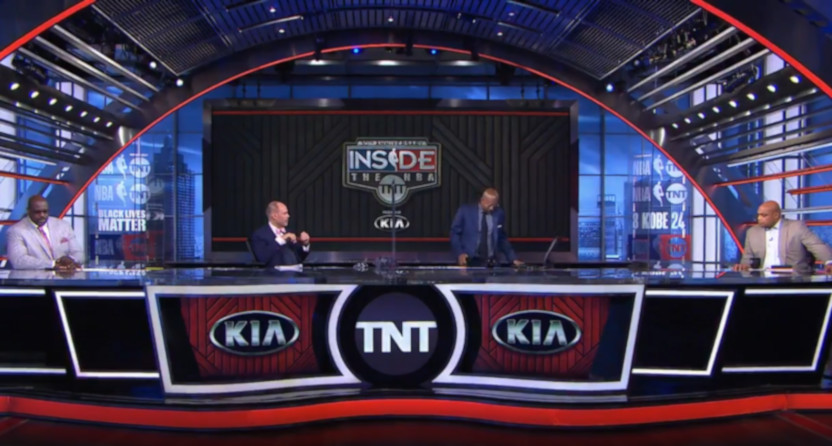 The Milwaukee Bucks’ decision not to play Game 5 of their NBA playoff series against the Orlando Magic Wednesday (in protest of the police shooting of Jacob Blake in Kenosha, Wisconsin earlier this week) has led to a lot of repercussions in sports, including other NBA teams planning not to play, the NBA postponing all of its games Wednesday, and MLB’s Milwaukee Brewers and Cincinnati Reds postponing their scheduled game Wednesday. And it also led to an unusual media scene from Kenny Smith on Inside The NBA.

Despite the lack of games today following those postponements, Turner went ahead with the show and looked to have their analysts discuss what’s going on, but Smith then did something unusual. He made an opening statement about how he doesn’t really feel comfortable talking about this on-air right now, and then he exited the set in support of the players. Here’s that clip:

A transcription: “Right now, my head is like ready to explode, just in the thoughts of what’s going on, with what the players are feeling and how they’re feeling. I haven’t talked to any of the players, but even coming here and driving to the studio and getting into the studio, and hearing calls and people talking, and for me, I think the biggest thing now is as a Black man, as a former player, I think it’s best for me to just support the players and not be here tonight.” Smith then takes his mic off, but his next few words are caught on the studio mics: “And figure out what happens after that. I just don’t feel equipped today.” Host Ernie Johnson then says “And I respect that” as Smith walks off, and then turns it over to analyst Shaquille O’Neal.

That’s a remarkable move from Smith, and a surprising one. And it doesn’t look like one that was choreographed ahead of time; Smith taking off his mic before his final words would seem to contribute to this being spontaneous, and Johnson seemed pretty surprised by Smith’s move, but also accepting of it. And it’s definitely interesting to see an analyst throwing his support to this movement not just with his words, but with a decision to leave the TV spotlight for the night.