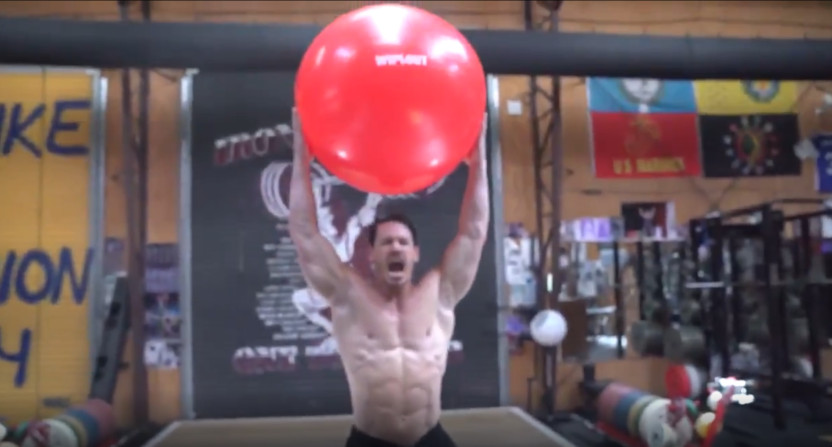 There’s another game show on the way with contestants getting demolished by physical obstacles, and this one has a WWE connection. TBS is bringing back Wipeout, which began  on ABC in 2008 (hosted by ESPN’s John Anderson alongside John Henson), and ran there for seven seasons, with the final one airing in the summer of 2014. In the new version, the giant red balls will return, but the commentators will change, with John Cena (known for his WWE work, countless movies, and even a host role on Nickelodeon’s Are You Smarter Than A Fifth Grader?) hosting alongside Nicole Byer (known for Nailed It! and Girl Code) and “host in the field” Camille Kostek (known for I Feel Pretty). Here’s a video Cena tweeted Thursday revealing his role, complete with AC/DC’s “Big Balls” as the soundtrack:

This is going to be wild! The new host of @Wipeout on @tbsnetwork is… pic.twitter.com/4U8BDkXU5F

The new Wipeout comes from Matt Kunitz, one of the creators of the original show. He, Byer and Cena had some notable comments in a Deadline piece on this:

“We couldn’t be more excited to have John, Nicole and Camille take charge of this outrageously unpredictable, family-friendly competition series,” said Matt Kunitz, creator/showrunner/executive producer of Wipeout. “Having a sports titan and movie star next to an Emmy-nominated comedy star, alongside a seasoned co-host, they’ll complement one another with their own fantastic qualities and humor while livening the already extreme setting of Wipeout.”

“Now more than ever we need a ton of fun and laughs,” said Byer, “and there’s nothing funnier than people falling over giant red balls. Wipeout is truly insane, and I’m tickled to be a part of this beloved show’s comeback.”

“I couldn’t be more excited for what’s in store for this radically absurd show that has its own fair share of legendary faceplants.” said Cena. “The power of Wipeout is its ability to gather people of all backgrounds for fast paced, physical FUN! I look forward to seeing fan responses both new and existing. This’ll be a hosting experience unlike anything I’ve ever done! I can’t wait to get started in rooting for our contestants!”

That’s a lot of exclamation marks there, John. But maybe the revived Wipeout will live up to that. There’s certainly a current appetite for shows that have contestants facing physical obstacles, from American Ninja Warrior to Holey Moley to Don’t.

And this Wipeout version will come with some format twists. The original show had 24 contestants competing over four rounds, with the first being a longer obstacle course where contestants were timed separately and the top 12 advanced, followed by two rounds with singular large and complex obstacles, followed by the top four making it to the “Wipeout Zone.” As for the new one, here’s what the release says:

“Each game has been designed into three rounds and now features a three-stage, obstacle course consisting of multiple strategy and decision points designed to further challenge, and wear out, the stamina of the competitors. The big red balls, an iconic staple of the show, are also back.”

Well, that’s good. It wouldn’t be Wipeout without giant balls.