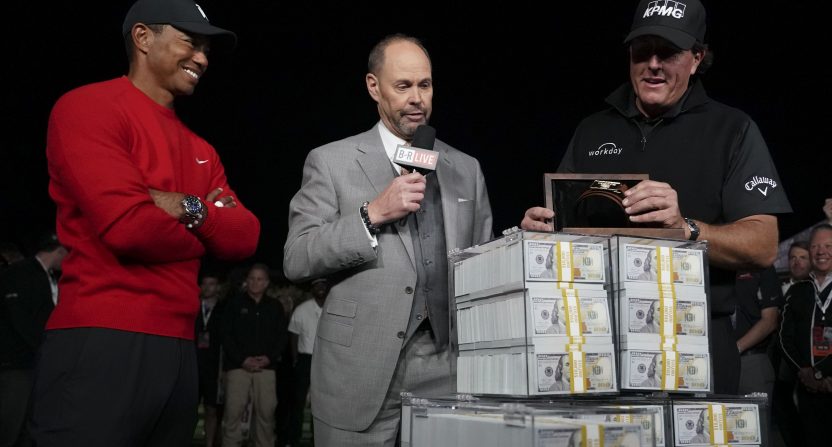 The long awaited “winner take all” matchup between Tiger Woods and Phil Mickelson finally took place on Friday, and despite a thrilling ending that took place under the lights, it’s likely going to be remembered for all the wrong reasons. Along with the pre-match social media “banter” between the two of them that was stiffer than a Nia Jax punch to the face (you WWE fans know what I’m talking about), there were technical difficulties for those trying to stream the match. The issues became so serious that B/R Live decided to make the match free for everybody, which defeats the whole “pay per view” aspect of it.

I admit I’m not a diehard golf fan, but I do follow the sport. I’ll watch as much of each round of the majors as I can as well, as the Ryder Cup, and I make sure to follow the sport from afar to stay somewhat in the loop. When this match was first announced, I was excited by the idea, but I never had the urge to spend $20 to watch this. Because B/R Live decided/was forced to make the match free on Friday, I watched the back nine and the playoff, and thought the whole spectacle was just okay. Sure, the ending featured incredible drama, but I pretty much had it on in the background until the 16th hole and even then, the end wasn’t worth $20 to me.

Maybe I wasn’t the target audience and this broadcast was geared toward those diehard golf fans who would be willing to shell out $20 to watch an event that would have been even better if it was done 10 years ago. Having said that, B/R Live, AT&T, and Warner Media sure didn’t market this as an event geared toward diehard golf fans. At the risk of angering diehard fans, this event was marketed toward casual fans like me, and despite a lot more gambling references and an exorbitant amount of money on the line, it wasn’t much different than watching the final round of a tournament.

What could have been done to improve The Match and urged more people to plunk down $20? Here are some ideas.

1. Make it more unique and create situations no one has ever seen before

This may have been the biggest missed opportunity in the entire event. Apart from Tiger and Phil making side bets, it was like any other PGA tournament. The tiebreaker was certainly a start towards making this event more unique, and it made things interesting. Starting on the 20th hole, the two faced a makeshift hole neither of them played and teed off from a green at a hole 93 yards away. The short hole proved difficult, as neither golfer made a habit in teeing off from a green but by then, the opportunity to be unique came too late.

Suggestions from those online and even on the broadcast included switching clubs and making the two play with their opposite hand. And while that’s great, I came up with a more outrageous idea: create a pairs match featuring Charles Barkley and Phil Mickelson taking on Samuel L. Jackson and Tiger Woods.

One issue with the broadcast was that while Tiger and Phil had open mics, their conversations weren’t that riveting. And when things really got serious toward the end, they talked a lot less. Add Barkley and Jackson, and you got two people who certainly want to gamble and are definitely going to trash talk the other team. They’re going to bring some entertaining comic relief in an event that veered towards being too stuffy at times, and will have some fun, even if there is $9 million on the line. And then as a bonus, we can all have a laugh about Barkley’s swing.

2. Don’t have announcers, or at the very least, don’t have them talk as much

I’m a big Ernie Johnson fan. Johnson is a wonderful host and a great person. In addition, Peter Jacobsen and Darren Clarke made good points throughout the broadcast. But when you consider one of the selling points for this pay-per-view was that Tiger and Phil had open mics and you could hear what they were saying, it would have helped if the announcers shut up every once in a while so we could hear them talking to each other. Or at the very least, listen to Phil’s heavy breathing.

PHIL: You know, Tiger, I’ve always wanted to tell you this, and I regret not saying it sooner but-

JACOBSON: BLAH BLAH BLAH WHAT AN AMAZING MATCH THIS IS WHAT GREAT GUYS THERE ARE.

Tiger: Wow. Thanks Phil. Let’s never speak of this again.

Ernie: "Hey Peter, has the chatter between these two slowed down on this back nine?"

Peter: "I have no idea Ernie, I've been talking the entire time."

That pretty much says it all. If not having announcers on a broadcast is “too radical” of an idea, at least provide the option to not have announcers. The match was streaming online, and that can easily be done on a secondary feed (as we see with MLB.tv’s stadium sounds broadcast feed).

I get the concept of a “winner take all” match and I’m not exactly saying this would be better. But imagine how much more intense this match would have been if Tiger and Phil competed in a Skins Game type competition where each hole was worth $500k, adding up after each hole the two would tie. There would have been much more pressure to be the best on each hole.

Keep in mind that this would have brought very different results to the match. Surely, the two golfers would have played very differently under Skins Game rules. But if we were to take their hole-by-hole results, Tiger would have won 11 Skins and $5.5 million, while Phil would have won seven Skins and $3.5 million. While that would create pressure on every hole, the allure of someone winning $9 million may be better than the two splitting the prize and taking home $5.5 million and $3.5 million, respectively. Maybe they were right about this one.

4. Have Tiger and Phil put up their own money

When I first learned of this event, I thought each golfer was going to put up half the prize money and essentially bet the other $4.5 million. Those are some high ass stakes and would have really made things interesting. Sure, winning $9 million is a big deal too and it seemed to be on the mind of Phil Mickelson toward the end when he struggled to close things out, but he and Tiger already have a lot of money and someone already wins $10 million when they win the FedEx Cup. Call me ruthless, but people may be more likely to pay $20 to not only watch someone win $9 million but to also watch the other lose $4.5 million of their own money at the same time.

5. Play up gambling aspect even more

As previously mentioned, the gambling aspect was played up with the two making side bets for charity. Phil collected $600k, while Tiger won $200k. Throughout the broadcast, current odds and betting trends were displayed, giving us a potential preview of things to come when it comes to discussing gambling in other sports events. Even though gambling was a main focus on the match, it could have been an even bigger part of the event.

I couldn’t find if there’s a law against doing this, but if there isn’t, have a camera in a Las Vegas sportsbook and grab reactions of those watching the match who have money riding on what happens. Anyone who has ever been in a sportsbook knows the kind of atmosphere that erupts during a live event. The mood changes when a game goes over or a team covers the spread. Whether you were betting on Phil or Tiger, the people in the sportsbooks were just as on edge as anybody in the final few holes. We show reactions from family and fans all the time, and showing reactions from those who either just won or lost a lot of money would be great TV as well. That is, if that’s legal.