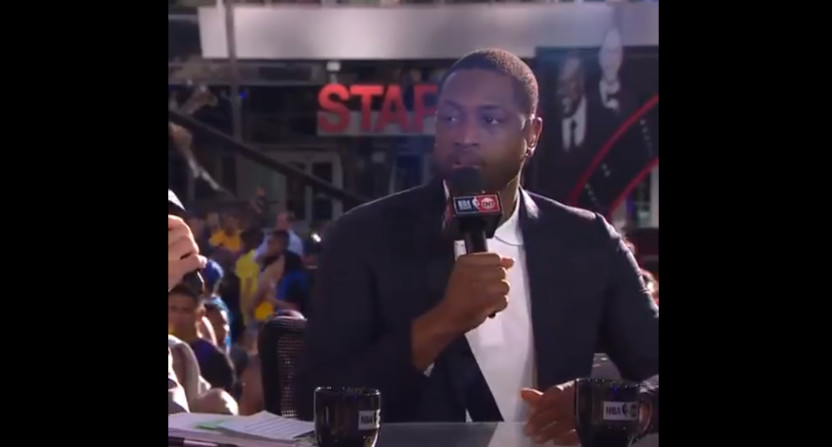 There are plenty of NBA players who head to the analyst ranks after their career, but what’s particularly interesting about how Dwyane Wade has done that is that his move there has incorporated a whole lot of other projects. Wade appeared on the NBA on TNT opening night coverage Tuesday and announced he’d be doing NBA work with Turner, but as per Patrick Shanley of The Hollywood Reporter, his role at WarnerMedia (the new parent of Turner Sports) goes well beyond that:

Wade will join Turner Sports as a commentator, making appearances on TNT’s NBA event coverage and serving as a regular analyst for the network’s Tuesday night studio coverage alongside Shaquille O’Neal and Candace Parker. He also will appear in studio at the NCAA Final Four and National Championship as part of Turner Sports and CBS Sports’ coverage of the annual collegiate tournament.

Wade’s production banner, 59th & Prairie Entertainment (named after the Chicago intersection where he grew up), has also reached a development deal with WarnerMedia to create a number of new projects to be revealed at a later date. In February, Wade and his company teamed with Imagine Documentaries and Brian Grazer and Ron Howard to develop a documentary based on his life.

Additionally, he will take on a creative director role at sports media company Bleacher Report, which was acquired by Warners in 2012 for $175 million. Wade will work with Bleacher Report to develop “custom content experiences that resonate with young, passionate fans.”

“I’m thrilled and grateful to be joining the WarnerMedia family with many exciting opportunities ahead,” Wade said Tuesday in a statement. “I have great respect for TNT’s team of analysts and their longstanding commitment to quality sports coverage. After 16 seasons in the NBA, I look forward to connecting with my fans in this new role and bringing my own perspective to the game I love.”

.@DwyaneWade talks about free agency, player empowerment and the decision to form the Big Three in Miami. pic.twitter.com/lckySPb0be

It’s certainly unusual to see this kind of multi-faceted deal for a commentator, but it makes some sense with someone who has a profile as high as Wade’s. And plenty of NBA stars, including Wade’s former Miami Heat teammate LeBron James, the Golden State Warriors’ Steph Curry, and former Warriors’ star and current Brooklyn Nets’ star Kevin Durant, have managed to land significant TV production deals while still playing, so it makes some sense to see what Wade can do there. It’s notable to see him add a Bleacher Report role as well, though, and that perhaps speaks to the further integration of WarnerMedia’s various sports properties. And it will be interesting to see if Wade’s cross-company deal becomes somewhat of the new normal for prominent players going into analysis, or if this is an exception given his prominence.

[The Hollywood Reporter; screencap from the NBA on TNT on Twitter]