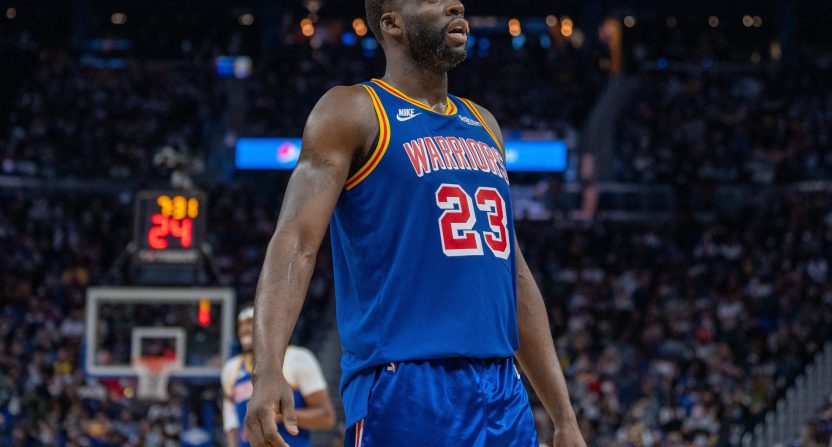 Golden State Warriors’ forward Draymond Green has been a frequent presence on Turner Sports’ platforms over the last few years, offering guest analysis on NBA on TNT broadcasts (including for last year’s playoffs), appearing on their The Arena issue-based discussion show, and even interviewing Kevin Durant for Bleacher Report this summer. And while Green has played the feud with some Turner personalities, particularly Charles Barkley, he’s made no secret about his enjoyment of media roles and his desire to work in sports media more regularly after his career. Well, he’s now adding a more regular media job before his career is even over, with Turner announcing Thursday they’ve signed Green (seen above in a Dec. 23 game) as a contributor:

Draymond Green, a three-time NBA Champion and three-time NBA All-Star with the Golden State Warriors, will join Turner Sports in an exclusive, multi-year agreement. The unique arrangement will include Green making appearances on TNT’s Inside the NBA, among additional content initiatives throughout the Turner Sports and Bleacher Report portfolio, as an active player.

As his schedule aligns, Green will join the Sports Emmy Award winning studio team of Ernie Johnson, Charles Barkley, Shaquille O’Neal and Kenny Smith as an analyst, making select appearances – a combination of remote contributions and, at times, in person – throughout the season. Green will also contribute to various other programs, special projects and content initiatives.

“Draymond is an incredibly versatile talent, both on the court and in front of the camera,” said Tara August, Senior Vice President, Talent Services and Special Projects, Turner Sports. “He’s a team player in every sense, while offering a distinct perspective that is highlighted by his keen basketball IQ, charismatic delivery and forthright, thoughtful opinions that include and extend beyond sports. We’re thrilled to more formally welcome him to the Turner Sports family.”

“I’ve had an amazing experience working with Turner Sports in recent years and I’m a big believer in the way they entertain and genuinely connect with fans on all levels,” said Green. “Today’s announcement helps to formalize our relationship and I couldn’t be prouder to officially be a part of the of the TNT family.”

A lot of this sounds like what Green has already been doing with Turner, just in more regular fashion. But it is notable for them to bring on an active NBA player as a more regular guest analyst, and maybe especially one who’s often been outspoken with criticisms of NBA media. Green’s had his own on-air blunders in the past, but he does bring a different perspective, and it can be interesting to hear his takes on the league (and some other players have found them interesting and usable as well).

And while having an active athlete as a commentator is not unprecedented (for just a couple of examples, Turner alone currently has active WNBA player Candace Parker as a commentator for their Tuesday night NBA broadcasts, and we’ve seen Showtime and Fox employ active NFL players, although that’s sometimes created controversy),  it’s not common. And it’s notable to see that now happening in the NBA. We’ll see how this agreement works out for Green and for Turner.