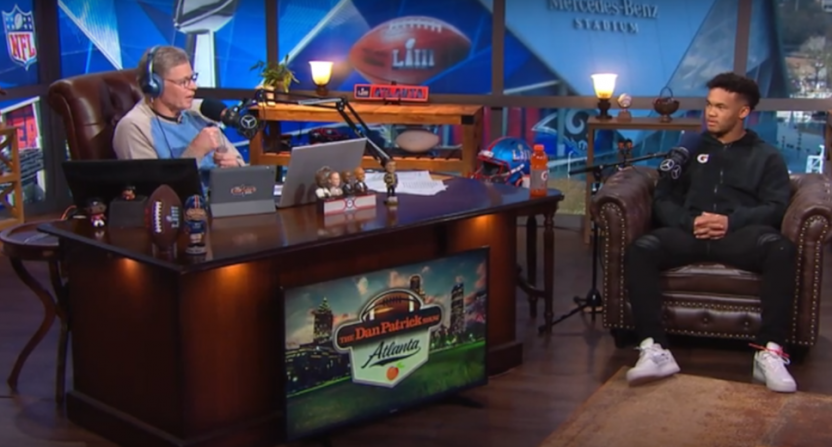 Yesterday, news broke that NBC Sports Network would no longer be simulcasting The Dan Patrick Show weekday mornings, and today we learned that as of March 1 NBCSN would be replacing the show with a replay of PFT Live and an hour of Sky Sports News.

Until tonight, though, we didn’t know where the Dan Patrick Show simulcast would end up. According to Ryan Glasspiegel and Bobby Burack at The Big Lead, the show is likely heading to B/R Live, Bleacher Report’s subscription streaming service.

As TBL notes, this makes sense from a big-picture, corporate synergy perspective (always the sexiest perspective):

The Dan Patrick Show originates from a deal with AT&T/DirecTV, airs on their Audience network, and is licensed out via simulcast to FOX Sports Radio on Premiere Networks and SiriusXM. It had been simulcast on NBCSN since 2012.

Earlier today, the US Court of Appeals upheld an earlier legal ruling that, despite objections of the Justice Department, AT&T will be allowed to acquire Time Warner. What this means from a sports media perspective is that DirecTV and Turner Sports, which owns Bleacher Report, will be under the same umbrella.

As Bleacher Report looks to build up the content library for B/R Live, it makes sense to anchor their weekday programming with something both reliable and (presumably) not overly expensive. And it also could end up being a longer term play for Turner overall, as TBL also reported that there could be plans to put the show back on traditional television as well:

While a lot of things pertaining to the merger are in flux and nothing is set in stone, it would not be astonishing if the Dan Patrick Show landed back on linear television on one of Turner’s networks — TNT, TBS, or TruTV — down the road.

If you have DirecTV, you’ll still be able to watch the show on Audience as well.