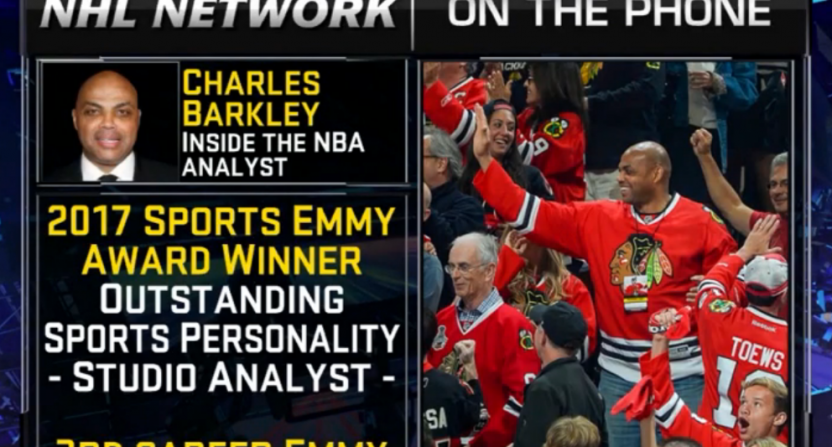 When NBA on TNT analyst Charles Barkley said “Thank god for the NHL playoffs, that’s what I’ve been watching in the back” Monday, we took it as mostly a slam on the blowouts in the NBA playoffs, but floated the idea of him actually providing hockey analysis. On Wednesday, he did just that, joining the NHL Network’s NHL Now  by phone to discuss his statement about the NHL playoffs and offer his analysis on the remaining teams. Here’s the video:

Host Michelle McMahon starts by asking Barkley why the Stanley Cup playoffs interest him, and he responds “Because anything can happen. Not just this year in the NBA, where we know the Warriors and Cavaliers are gonna play for the Finals, but most of the time, you know until you get deep in the [NBA] playoffs, the games are not gonna be that competitive. But it’s not that way in hockey. You know, I started following hockey in ’84. I had never been to a hockey game. And Eric Lindros and Ron Hextall, Ron Hextall’s my favorite hockey player, so I’ve been a hockey fan since 1984-85 when I got to Philadelphia. And I’m not just saying this because I’m on the show. The Stanley Cup playoffs, they are the best thing in sports.” (Note: Lindros wasn’t actually drafted until ’91, and only wound up in Philadelphia thanks to a trade ahead of the 1992 draft after a year holding out from the Quebec Nordiques, so Barkley’s memories of him are from a little later.)

Co-host E.J. Hradek then asks why Hextall was Barkley’s favorite, and Sir Charles responds “I like guys who will fight. I don’t like players who are passive. When I played, I used to get mad at guys who don’t get mad. And when I was in Philadelphia for eight years, I went to a lot of Flyers’ games, and Ron Hextall, you know he wanted to win. That’s all I can ask out of any of my players. I want the fans to know ‘That guy wants to win.'”

Co-host Steve Mears then asked Barkley about his connections to Tampa Bay Lightning coach Jon Cooper. Barkley said “I know Coop well, he’s a good friend,” and added that he has other hockey connections. “I’ve known Wayne Gretzky for a long time, he’s a great friend, same thing with Jeremy Roenick, Eric Lindros is a casual friend from back in my Philly days. But I just love…I’m glad that every game goes to overtime, because there’s nothing more exciting than overtime hockey.”

Barkley went on to offer his perspective on Game 7s, talk about how he roots for great players who haven’t won the Cup, talks about dealing with pressure and history, and offers one of the best takes on Alex Ovechkin we’ve heard in a long time.

“Alexander Ovechkin’s a better player, I’m not on his level, he’s one of the greatest ever. But it’s interesting when I sit back…tey always blame great players for not winning. They never say, ‘Well, how about the other guys who didn’t do their job?’ They’re always talking about Ovechkin hasn’t won the Stanley Cup. The guy’s been one of the great players. That’s the blame game, it’s unfortunate, but I haven’t heard anyone mention Oshie, Kuznetzov, Shatterink (he means Shattenkirk), I forget, they got him at the trade deadline, but the only thing you hear people talking about for the last three to four weeks is ‘Can Ovechkin get to the conference finals?’ I mean, He’s not out there playing by himself! People always say ‘Charles Barkley never won a championship,’ I get all the blame, but I wasn’t out there by myself. Why don’t you mention that to some of the other guys sometime?”

Compare that to the dumb hot takery of NBCSN’s Mike Milbury, who, unlike Barkley, is actually paid to talk about hockey, and Barkley comes off looking like a better NHL analyst. Yes, Barkley has a bit of a bias here as someone oft-criticized for not having a championship ring, but that doesn’t make him any less right. We suggested a Barkley-Milbury swap as a joke, but maybe that should actually happen, especially given Barkley’s problematic NBA takes recently. (Milbury analyzing basketball sounds like a recipe for disaster, though, and he might hit fellow panelists with shoes.) In any case, Barkley went on to make an interesting prediction.

That’s certainly possible, with Bodog anointing the Penguins as favorites from the remaining teams (8/5 odds, vs 11/4 for Nashville and Anaheim and 11/2 for Ottawa) Thursday. We’ll see if Barkley’s prediction turns out. But in any case, he definitely does seem to follow the NHL, not just make easy jokes about it to bash the current NBA. Good for him, and good for NHL Network for landing a pretty interesting interview here.