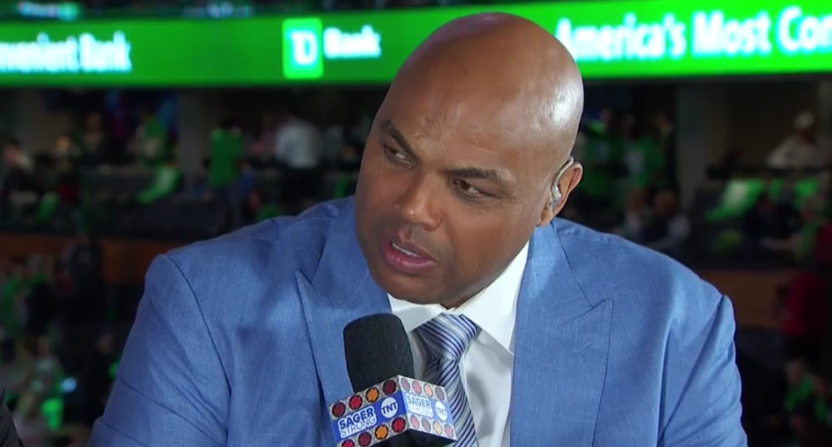 One of the more entertaining subplots of these NBA playoffs has involved NBA on TNT analyst Charles Barkley not only bashing the caliber of the matchups so far (that’s not exactly a unique opinion), but going on to talk about how he’d rather be watching the NHL playoffs instead. On May 8, while discussing the Golden State Warriors’ sweep of the Utah Jazz, Barkley said “Thank god for the NHL playoffs, that’s what I’ve been watching in the back,” and he followed that up a couple of days later with an appearance on the NHL Network that showed he actually has been keeping pretty close tabs on the Stanley Cup Playoffs (one which also saw him call them “the best thing in sports“).

“You know what I’m gonna do? I’m gonna sneak back to the hotel, watch the rest of the hockey game—it’s 1-1, y’all—and I’m going to pack up my stuff, because this game is a rout.”

Ernie Johnson then chimes in with “You’ll record something for the post-game show for us?” and Barkley responds “I’m going to be back for the post-game show,” then Shaq asks “You don’t think with that little run there, that if they can cut it to ten…” and Barkley shakes his head. Well, that would turn out to be accurate; the Cavs only pulled away further in the second half, eventually winning 135-102 to clinch a 4-1 series victory. Meanwhile, the NHL game wound up going to double overtime before the Penguins’ Chris Kunitz scored the game- and series-winning goal. So, yeah, there was definitely more tension in the NHL game. And it should be noted that Barkley followed up his on-air comments with a request in the media room to put the NHL game on, plus an explanation of why he cared about it:

Charles Barkley just walked into the media room and asked if we could put the hockey game on. He said he bet on Ottawa.

Well, that bet didn’t work out so well for him, but the hockey comments were pretty funny (and also accurate). And they led to some funny responses:

Charles Barkley just said he's going back to the hotel to watch the hockey game. Charles promotes the NHL more than the NHL Network.

This is partly just a bit more bashing of the modern NBA from Barkley, something he’s long been known for, but some frustration over the NBA’s lopsided playoff matchups and blowouts is also fair (and shared by many viewers). And hey, as previously mentioned, if he wants to move over to NHL analysis, there’s a strong argument he’s already better at that than NBC’s Mike Milbury (low bar, but still).

Overall, though, this is mostly just one more example of Inside The NBA going for entertaining moments over serious analysis, and it’s hard to argue with that (especially in a blowout like Thursday night’s). And this wasn’t even Barkley’s only highlight of the night, as he and Shaq also had a lighthearted pre-game continuation of their feud, with Barkley yelling “Just for the record, Shazaam sucked! And you a bad rapper too!” and Shaq responding “Someone bring me a chicken wing so I can throw it at Chuck”:

They’re at it again, America… ? #WatchOut

That broadcast also featured a graphic of Shaq as a hobbit, which is hilarious:

One foot to rule them all. ?

Funnily enough, the antics from Barkley, Shaq, Ernie Johnson and Kenny Smith might actually have kept people watching instead of switching to hockey. At the very least, they were more entertaining than most of the basketball game.