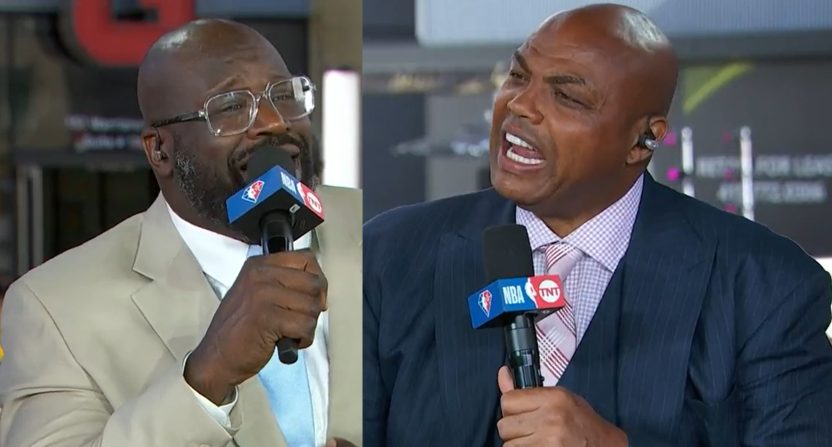 Charles Barkley and Shaquille O’Neal have enjoyed some epic squabbles of their own over the years. But Tuesday night, they teamed up to take aim at Skip Bayless and Shannon Sharpe.

It seems like Barkley and Shaq get into it on a weekly basis during Inside the NBA. Some of their clashes appear genuine, while others are contrived for entertainment. Tuesday night’s bout definitely fell into the latter category, as the NBA Hall-of-Famers blatantly mocked Bayless and Sharpe for a recent blow up they had on their FS1 debate show Undisputed.

Earlier in the week, Bayless and Sharpe went viral for their excessive clash over Tom Brady, which drew more than 15 million views on social media. During the segment, Sharpe accused Bayless of taking personal shots at him, prompting the Pro Football Hall-of-Famer to rip his glasses off in disgust. Bayless responded by imploring him to “put your glasses back on” while claiming Sharpe was the one who was being disrespectful.

Fast forward to Tuesday night, where Shaq and Barkley threatened to slap each other on national TV before turning it into a skit to mock Bayless and Sharpe.

“Disrespect me again, Skip Bayless,” Shaq said, making it clear that they were trolling the Undisputed hosts.

Barkley responded by putting his glasses on, just so he could emulate Sharpe by tearing them off to yell at Shaq. “Insult me again!”

“Put your glasses back on!” Shaq yelled before the duo broke into a fit of laughter.

Surely, Barkley got a kick out of being able to troll Bayless on national TV, with the two infamously having a vicious feud between them. Earlier this year, Bayless claimed he fears the hate and threats that Barkley sent his way over the years may eventually lead to his death. While Barkley has made physical threats against Bayless in the past, Tuesday night’s ribbing was a little better-natured, mocking the over-the-top debate show host where he deserved to be mocked.