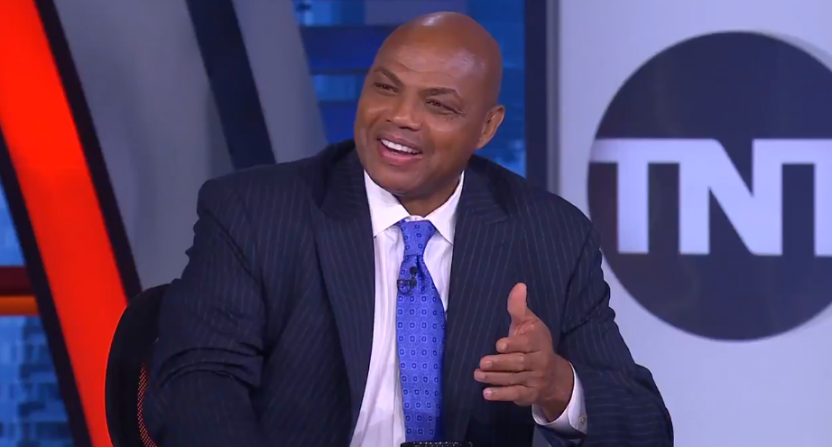 Tuesday’s early news about Charles Barkley was how his NBA All-Star Game role was shifting, from a reported spot in the main TNT booth to a conversational Inside The NBA alternate broadcast on TBS. Turner then held a conference call with the Inside The NBA cast to discuss that move, and Barkley (seen above on Inside The NBA last June) made perhaps more news still with a comment at the end to Jon Lewis of Sports Media Watch that he’s likely to retire once his current contract ends after two more years. Here’s Lewis’ relaying of that, then a transcription of Barkley’s quotes from Brad Townsend of The Dallas Morning News:

Just asked Charles Barkley about his future on a TNT conference call and he says he plans to do two more years and then step away when his contract is up.

"It's been a great, great thing. I love Ernie, Kenny, Shaq and everybody we work with. But I just don't feel the need to work until the day I die. I don't, man. I'll be 61 years old if I finish out my contract.

Those are quite the quotes, and the colorfulness there (including a shot at long-time panelmate and back–and–forth ribber Shaq) helps illustrate what’s worked so well for Inside The NBA over the years. And some of that will certainly be lost if Barkley moves on as he plans. But he has been in this role with Turner since 2000, and that’s a long time to spend in any role, so it’s understandable that he might want to move on from it.

It’s also worth noting that Barkley has talked about retiring from TV before without anything coming of it. Thus, this isn’t necessarily a firmly-made decision, especially with him only using “probably” here. And there’s still the rest of this season and then two more seasons before his contract is up, so no farewell is imminent. It’s quite possible he could change his mind. But it’s certainly notable to hear Barkley talking about an exit. And if he does actually exit, that will mark a massive change for Inside The NBA.