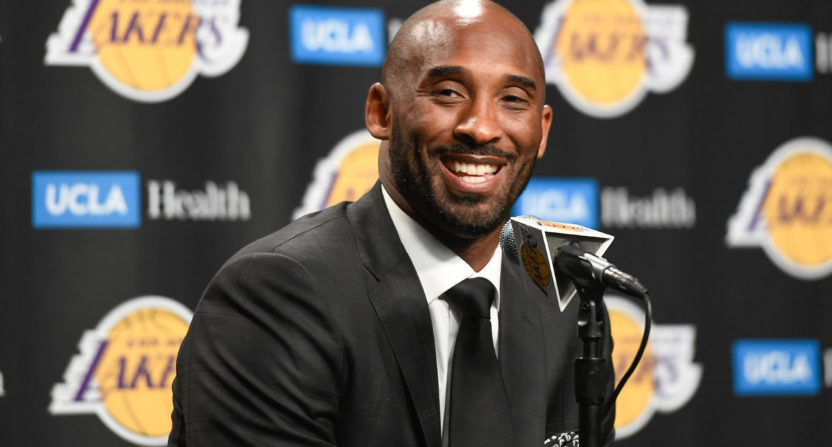 Kobe Bryant, Inside the NBA analyst? It almost happened, according to Charles Barkley.

TNT’s flagship basketball show has seen plenty of fill-in and temporary analysts come and go, but the iconic lineup of Ernie Johnson, Kenny Smith, Charles Barkley, and Shaquille O’Neal is what NBA viewers think of when they picture their favorite moments and highlights. The camaraderie between them over the years has made for plenty of memorable moments, wacky hijinks, hot takes, and playful jabs.

Now imagine what it might have looked like with the often stoic Bryant in the mix. Perhaps we might have found out if he’d follow through on plans to join the show. That’s according to Barkley, who claimed on Monday during an appearance on The Draymond Green Show, that Bryant had “signed” with the program before quickly backing out.

“But then when we started telling him – you know I have to do a bunch of radio shows. Like, I go on this show on Monday and, ‘Hey – Thursday from TNT.’ Same thing on Tuesday, same thing on Wednesday, same thing on Thursday.” He like, ‘Yeah, I don’t want to do all that stuff.’ Well, you have to promote the show, Kobe.

“So Kobe is actually so funny – like I say, there is probably only ten people in the world know that. That he actually signed with and he like, ‘Nah, I’m not doing all that other bullshit. And he just like, ‘Nah.’”

Is it true that Bryant “signed” with TNT and then backed out? Or is it more likely that he was strongly considering it and then decided not to? It’s hard to imagine that reporters like Adrian Wojnarowski didn’t suss something like this out or that it didn’t leak out in some form, especially if contracts were actually signed.

Of course, we’ll probably never know for sure unless a Turner executive speaks. It reminds us of the time Barkley’s co-host Shaquille O’Neal claimed that Michael Clarke Duncan’s role in The Green Mile was his first and he turned it down, which doesn’t exactly seem like how it really went down.

Regardless, the possibility that Bryant could have joined Inside the NBA opens up a lot of interesting scenarios to ponder, even if his role would have been more part-time given all of the other things Kobe had going on. Just the opportunity to put Kobe and Shaq on the panel together and let them hash out their time together with the Lakers would have been must-see TV.

For what it’s worth, Kobe was literally asked in 2018 about his “level of interest of one day being a traditional analyst, like Shaq or Barkley,” to which he replied, “Zero.”

“I love what I’m doing now,” said Bryant. “I love coming to the office writing, editing, creating. Building a studio is no small task. It’s all-encompassing. I just don’t have the time to sit at a studio and do that.

“If that was my passion, to be able to sit at a studio desk, do that day in, day out, I would certainly do it. That’s not my passion. My passion is writing, creating, putting beautiful stories together, weaving them in the form of a narrative.”

You can read that quote as proof Bryant would never join Inside the NBA or you could read it as proof that he had the realization that Barkley inferred. Again, we’ll probably never know for sure how it all went down.