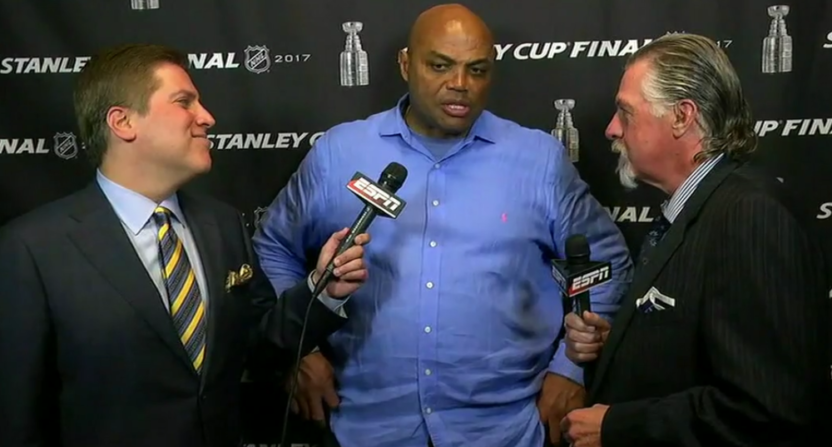 Turner Sports NBA analyst Charles Barkley went to Game Four of the NHL’s Stanley Cup Final Monday at the invitation of NHL commissioner Gary Bettman, and he made plenty of news while there. Barkley crashed Wayne Gretzky’s press conference, was featured on the Jumbotron, and bashed the NBA while praising the NHL, saying he couldn’t be fired, and wishing for an alligator to eat Jeremy Roenick during a NBC intermission interview.

Barkley then managed to create yet more of a stir during a post-game interview with ESPN’s Steve Levy and Barry Melrose that was shown on SportsCenter. In that one, he called Melrose “the best analyst on television,” but said “the only difference is you don’t deal with those wussies in the NBA.”

Those are strong words from Barkley, and it’s interesting that he once again managed to work criticism for the NBA in with praise for the NHL, something he’s done on multiple occasions this year. Of course, some of Barkley’s criticism for the modern NBA has to do with maintaining his own legacy, and particularly to do with bashing Golden State’s brand of basketball, which he’s called “little girly basketball” and (like other former greats) seems to see as antithetical to how he played. And if his praise for the NHL (which seems sincere; he’s talked plenty of times about his love for hockey, which started when he played for the Philadelphia 76ers and went to Flyers’ games) lets him lob shots at the NBA as well, he probably thinks so much the better.

It’s probably not worth it for Turner to get mad at Barkley over stuff like this, though. Sure, on one hand, Turner probably doesn’t love one of their highly-paid analysts criticizing the product on their network and praising NBC’s product (and interestingly enough in this case, doing so on a third competitor, ESPN). But the conflicts between the NHL and NBA playoffs aren’t that numerous at this point, and the leagues both have their own groups of fans; there may be some willing to switch to whatever’s more interesting, but lots are already committed to one or the other if there is a conflict. That’s not going to change just because of a few comments from Barkley.

Moreover, a big part of what makes Barkley so popular as a NBA analyst is the sense that he’ll say whatever’s on his mind rather than holding back. That’s true with these comments and with this whole Barkley NHL tour. This is him speaking his mind, and speaking his mind works for him on TNT. And this may ultimately be good for Turner; Barkley’s comments Monday drew a heck of a lot of media coverage, and most of that coverage is identifying him as a TNT analyst, and it may lead to yet more people tuning into (or at least, not turning away from) TNT”s halftime and post-game shows to see what Barkley will say next.

In any case, Barkley’s NHL tour was definitely interesting, and definitely notable. And he also told Melrose and Levy about how he’s never donned ice skates, and doesn’t plan to:

“There’s nothing better than playoff hockey in overtime. That’s the greatest sport in the world.” Levy then asks “What’s the last time you were on ice skates?” and Barkley replies “Never.” Melrose then says “You’ve never been on skates? Not once? We need to change that,” and Barkley responds “First of all, that’s never going to happen now. I’m an old fat guy now. I used to be young and have talent; I might have tried it then.”

That’s some funny self-deprecation from Barkley, and that’s more of why people like him. While he’s sometimes too wistful for the NBA of his time, and too determined to prop up his own career, he also has a sense of humor about himself, and this showed it off. And it’s more evidence of how him going to NHL games and trashing the NBA isn’t necessarily all that bad for him, or for his employers.