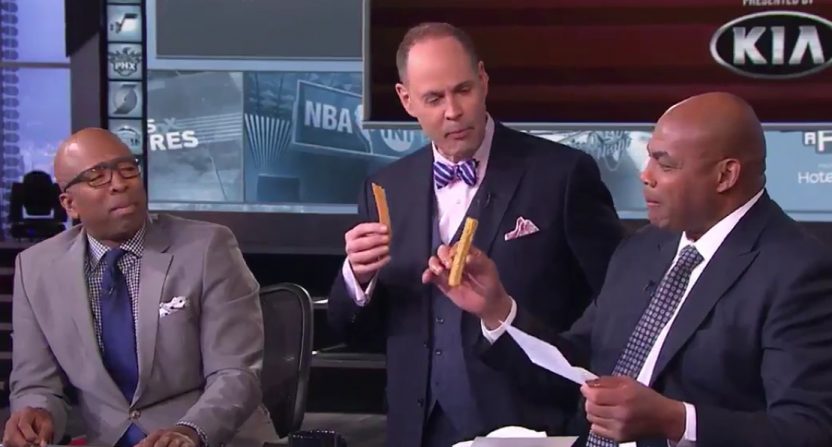 One of the weirdest long-running things in sports media has been NBA on TNT analyst Charles Barkley’s comments about San Antonio women and churros. Here’s a 10-minute compilation of the various comments he’s made on that front over the years, if you have the patience for that:

If you don’t, and we don’t blame you, here’s a brief rundown. One of the early instances was in 2014, where Barkley talked about getting churros in San Antonio and said “there are some big ol’ women down in San Antonio, that’s a gold mine for Weight Watchers.” He repeated this in 2016, saying “They wear them big ol’ bloomers down there, they can’t get in them cute little panties, they wear bloomers,” and “Listen, you big ol’ women need to stop … ease up on them churros.”

Last week, Barkley “apologized,” but not really, declaring his love for churros but repeating his other comments, saying “Them damn things are good, Ernie. I see why they got all them big ol’ women down in San Antonio. Them churros are the BOMB!” On Sunday, though, the San Antonio Express-News took this to a new level, sending Barkley a box of churros, which he opened and he and host Ernie Johnson then ate on-air despite Kenny Smith’s protestations:

Look, Barkley (once dubbed “The Round Mound of Rebound”) probably shouldn’t be criticizing others’ weight, or criticizing entire cities’ female population based on…something? But this story’s mostly absurd rather than outrageous at this point. We still don’t really know the backstory behind Barkley, San Antonio, women and churros (and do we really want to?), but credit to the Express-News for playing along here, defending the honor of their city and its fried foods, and getting a little publicity in the process. Nick Moyle’s Express-News recap of the prank has a good conclusion, too:

Barkley dove in after EJ’s taste test and thanked the good people of San Antonio.

You’re welcome, Sir Charles. Just don’t expect to find that sort of goodwill in abundance next time you tour our fine city.

Yes, credit to Ernie Johnson for eating this on-air and prompting Barkley to follow suit. No, the churros were not poisoned. They were, however, a reminder that there’s somehow been a bizarre feud between Barkley and an entire city over churros and body mass for three years.