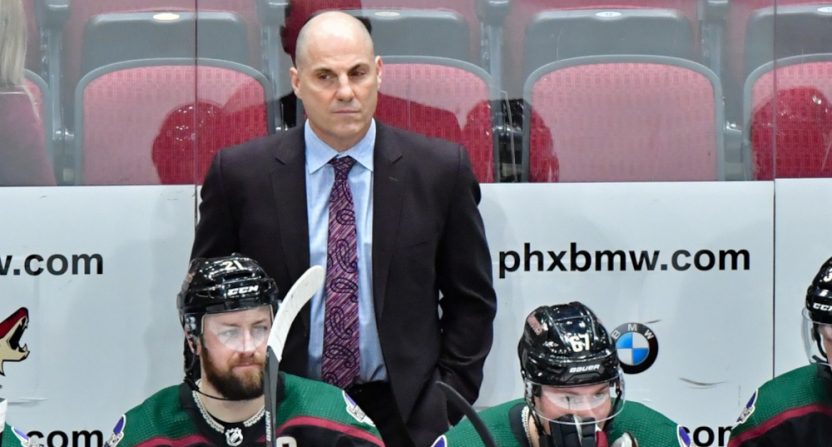 After a season and a half on The NHL on TNT, Rick Tocchet is returning to the NHL coaching ranks. He’ll be doing so with the Vancouver Canucks, who officially announced the firing of head coach Bruce Boudreau (and assistant Trent Cull) and the hiring of Tocchet (and assistants Adam Foote and Sergei Gonchar) Sunday after weeks of speculation that Tocchet would replace Boudreau.

General Manager Patrik Allvin announced today that the club has made multiple changes to its coaching staff.

Here are GM Patrik Allvin’s comments in that release:

“We would like to extend our sincere thanks to Bruce and Trent for their contributions to this organization,” said Allvin. “We appreciate their dedication and wish them nothing but the best moving forward. This was not an easy decision to make, but one that we felt was necessary for this franchise.

“Rick Tocchet brings a wealth of knowledge to this team from both a coach and player perspective. He has had more than two decades of coaching experience, guiding teams of various styles. As a player, he displayed a high level of character, grit and intensity, while recording impressive offensive numbers.

“We are also excited about the additions of Adam Foote and Sergei Gonchar to our coaching staff. Both individuals enjoyed long, successful playing careers as NHL defencemen and together provide a wide range of expertise on both sides of the puck. Tocchet, Foote, and Gonchar all bring a championship pedigree to the organization and we look forward to welcoming them to Vancouver.”

Congrats to my friend Rick Tocchet on the new gig! Learned so much from him this past year and half. A great hockey mind and a truly tremendous teammate.
Don’t say it enough, but Big thanks to @NHL_On_TNT for putting at the desk together. https://t.co/HbVfvcfI51

The hiring of Tocchet (seen above in 2020 with Arizona) comes with some criticism from many. Some of that is about people digging through his past Twitter likes, ranging from sexual content to political opinions. (He deactivated his account Sunday, but the screenshots remain.)

He has a specific taste I think Sam pic.twitter.com/J1zP7Cbd1f

There’s also been some criticism for Tocchet’s past. That includes the 2006 “Operation Slapshot” uncovering of his involvement in an illegal gambling ring in New Jersey (while he was an assistant coach with the then-Phoenix Coyotes). That led to him eventually taking a plea deal, pleading guilty to promoting gambling and conspiracy to promote gambling, and getting sentenced to two years of probation.

Beyond that, Tocchet’s coaching career certainly isn’t perfect. He’s spent six seasons as a NHL head coach, filling that role with the Tampa Bay Lightning (2008-10) and Arizona Coyotes (2017-21). Overall, he’s posted a career regular-season record of 178-200-60 as a NHL head coach, with just one playoff appearance (a first-round loss in the COVID-altered 2020 playoffs). He does have a long history of work in the game as a player (18 NHL seasons from 1984-2002), assistant coach, and broadcaster (with the-then Comcast SportsNet in Philadelphia early last decade, and then with TNT more recently), but there are many unimpressed with his coaching record.

Some of the backlash here also is about the way the Canucks treated Boudreau. It had been clear the team was going to move on from him for weeks if not months, but he wasn’t told that by management. And that led to fans showing support for him with “Bruce There It Is” signs at what proved to be his final game Saturday, and even an Encanto song parody:

I wrote and performed a parody of "We Don't Talk About Bruno" from the movie Encanto to bid a fond farewell to #Canucks head coach Bruce Boudreau.

Here is "We Don't Talk About Boudreau." https://t.co/i4pWcUTRne

Here’s some of what Thomas Drance wrote on the way the Canucks left Boudreau to twist, at The Athletic:

He searched out his wife in the crowd and held back tears as the fans serenaded him appreciatively one final time: “Bruce There It Is!”

“You never know if it’s the end,” Boudreau said of the moment. He spoke through tears. He stopped frequently to gather himself.

…“I’ve never had it where, like, I was fired once in the middle of the season — and by the way they haven’t fired me,” Boudreau said, as the media laughed. “And George (McPhee) called me to his house and we had a long talk.”

…He’s known the axe was going to fall for weeks — months even — but he’s baffled by the timing and the impersonality of all of it. He quipped on Saturday that the club had been waiting until the schedule turned to cake, to make sure his replacement is put in a position to succeed. He then wished his replacement “good luck.”

Tocchet may need some of that luck, as he’s walking into a difficult position here. The Canucks are 18-25-3 this season, 12th in the Western Conference. We’ll see how they do under Tocchet, and we’ll see where the NHL on TNT goes to replace him.